Unarguably one of the most important days for Google, at its developer conference I/O 2015, the company took to the stage to share many exciting news including its latest mobile operating system Android M, mobile payment system Android Pay, Brillo and Weave for Internet of Things devices. At the sidelines, the company also shared an update on its Android Wear smartwatches. 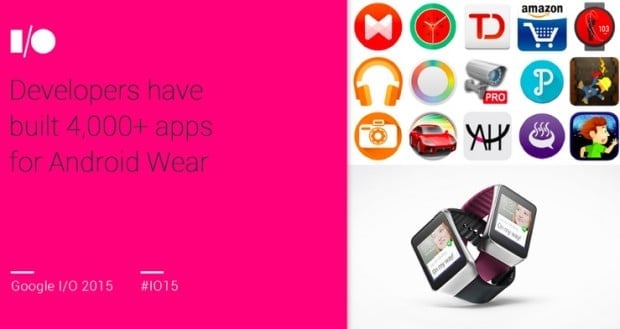 In more than one year, the company only saw seven Android Wear smartwatches ship by its partners. The shipment figures of them aren’t exactly very pleasing, either. But the company is willing to make another effort to revive the platform. At the conference today, Google noted an impending update for Android Wear, which brings with it a number of exciting features.

The update adds an always on display to show time as well as apps more often than usual. The apps will appear in glance mode in accordance with
your activity and location. More interestingly, the update also adds wrist gestures support to watch, allowing users to flick their wrist to go through a list and do similar things without ever touching the display. In addition, the company is also adding a “draw and emoji” feature to the watch.

The company took the opportunity to remind us that there are over 4,000 apps specifically for Android Wear smartwatches. It also announced that more popular apps including Uber, Foursquare, Citymapper among others are arriving to the platform. Spoiler alert: the ability to say “Ok, Google, call me a taxi” and get a taxi is one of the best things technology could ever do for you.

Was this article helpful?
YesNo
TechPP is supported by our audience. We may earn affiliate commissions from buying links on this site.
Read Next
New Wear OS Features: Google, Fitbit and Samsung Join Forces for this Update
#Android Wear #Google IO 2015 #Smartwatches #Uber