This past week has been Google’s week, no doubt about it, as the company announced quite a lot of things at its annual I/O conference. Some of these new services turned out into Android apps, as well, and we’ll be glad to resume that for you, in case you missed it. iPhone and iPad users can have a look at our sister roundup with iOS apps and games. If you missed the previous Android list, I invite you to have another look, as you’ll still find there plenty of awesome new apps and games for your Android device.

Without any doubts, Google has released its new Google Photos service with the purpose of disrupting the current cloud storage market. Most of use use online storage accounts for pictures and videos, and Google knows that. The new service will let you upload an unlimited amount of photos and videos, totally for free. The single restriction is that pictures can have a maximum resolution of 16MP and videos with up to 1080 are allowed. 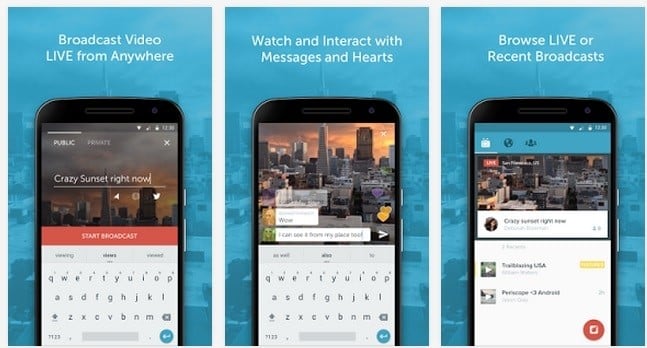 Twitter’s new Periscope app for Android users will allow them to broadcast video live basically from anywhere. When you go online with your stream, your followers will be notified and will be able to join, comment and send you hearts in real time. After your broadcast ends, you can make it available for replay and you also have to option of making it private. So next time you catch that beautiful sunset, you know what app to use to share the moment with your friends.

Google first released its new Inbox email app back in October, but made it available on a invite-only basis. The app is now available to all users, and you can download it freely from the Play Store. Inbox by Gmail comes with a bunch of useful features, such as highlights from emails, bundled messages, reminders, the option to snooze emails, advanced search and much more. If you always wanted a professional email app for your Android smartphone or tablet, this definitely makes it on the short list.

Android users of the photo-sharing app Instagram will now be able to use the new official Layout from Instagram app, as well, to better manage their collages. Layout from Instagram will allow you to re-mix up to 9 of your photos for a personalized layout and will come with a number of useful features such as the Faces tab to quickly find photos with people in them, Photo Booth mode with quick, spontaneous shots and many others.

Android fans of the Star Trek universe, rejoice! A brand new game has been made available on the Play Store for your gaming pleasure – Star Trek Trexels. The story of the game goes like this – ‘the USS Valiant has been destroyed by an unknown attacker, and Starfleet has chosen you to continue its mission deep within a mysterious area of space known as the Trexelian Expanse‘. For that, you will build your ship, choose your crew, and explore the Expanse in the name of the Federation. The game features iconic characters from the Star Trek world and there are many other new features in development.

Atlantic Fleet is a really awesome new game from Killerfish Games which is described as a turn-based tactical and strategic simulation of the Battle of the Atlantic during World War II. The game comes with impressive 3D graphics and environments, 3 game modes, 60 historical ship classes representing over 630 ships and 350 submarines, 13 playable aircraft and much more. Just have a look at the above video to see why this game has so many positive ratings so far.

Puzzle lovers are always looking for new challenges, and the new Interlocked game form Armor Games is a pretty interesting one. This new game is reminiscent of those wooden blocks that are impossible take apart. The game comes wit ‘stunning 3D brain-teasing puzzles’ along with a chilling atmosphere with calm music. At the moment there are 4 challenging chapters and 18 achievements for you to unlock. I’ve downloaded it on my smartphone and thoroughly enjoying it.

High Rise is a new simple casual game which is described as a ‘one touch stacking/building title’. You just need to touch and hold the screen to move your drop indicator, and then let go of the screen to drop a piece of building. The mission is to try to stack building pieces on top of each other without your structure falling over. I remember playing a similar game on a feature Nokia phone, so maybe that’s where their got the idea.

If you like bike games and enjoy playing them on your mobile device, Rush Star – Bike Adventure is one of the newest ones you can try. The game comes with tecord-breaking competition, 6 themed adventures and cop chase mode, various bike collection, from classic motorcycle to futuristic hover bike, costumes, special power items, a  boost system, mission and rewards and many others.

Lara Croft: Relic Run has been released for nostalgic Android gamers as a really attractive adventure game. It gets a plethora of features, such as multiple ancient gameplay locations filled with secrets and danger, a collection of weapons, parkour move, fast-paced vehicles, epic boss fights and leaderboards. The game is well designed and you can see from the above video that it’s a pleasure to play it.