Chromebooks have been around for a while now, and they have pretty much divided the digital world into two camps – those who think they are awesome, cloud-oriented, affordable tech wonders; and those who think they are awful, under-powered blots on the fair name of notebooks. The truth, as in so many cases, lies somewhere in the middle. Yes, Chromebooks are not the sort of hardware beasts that Windows notebooks are, but they have their own charm, noticeably in the departments of battery, speed, and to an extent, price (well, Windows notebooks have become a lot more affordable of late – witness the Asus EeeBook which costs a mere Rs 14,999). 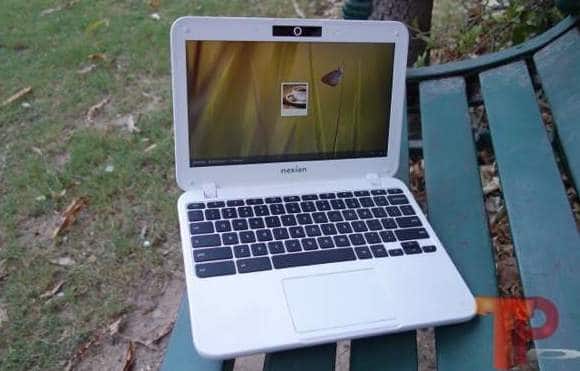 And those three charms have perhaps never been as well exemplified in a device as in the Nexian Air Chromebook, which was recently launched in India (Nexian, incidentally, is an Indonesian brand mainly known for smartphones which has been acquired by the India-based Spice Group). The notebook is one of Google’s ‘affordable Chromebook’ range that are driven by the Rockchip 3288 architecture that is based on ARM’s Cortex A17 processors, rather than Intel’s chips in most of the Chromebook’s past editions. We are told that the relatively low price of the device – Rs 12,999 on Amazon India – owes a lot to this processor.

Standard Chromebook specs…and with a handle too!

That might well be the case, for in terms of other specs, the Nexian Air ticks all the boxes. Like most Chromebooks, it comes with a 11.6 inch 720p HD TFT display (no, it is not a touchscreen), 2 GB RAM, 16 GB storage, Bluetooth and Wi-Fi connectivity, a 1.0-megapixel camera for video calls, a couple of USB ports, an HDMI port, a memory card slot (with support of up to 64 GB) – all of which runs off a 1.8 GHz quad core Cortex A17 processor. No, the specs are not going to make Windows notebook users turn green with envy but then hey, Chromebooks are not supposed to be spec monsters. 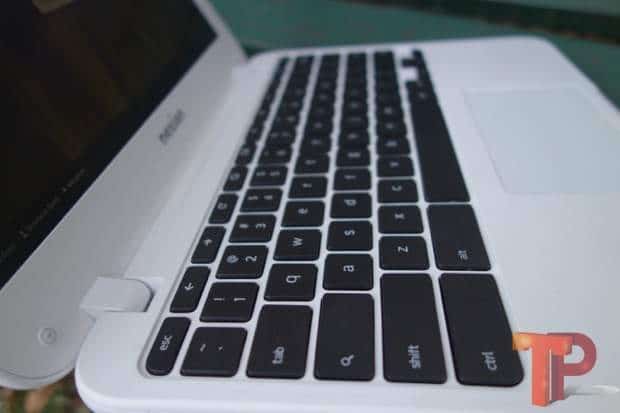 What however may make some regular notebook users feel just a bit envious is the design of the Nexian Air. No, it is not uber sleek – its proportions of 29 x 21 x 2.3 cm are decidedly on the ‘healthy’ side (as we call anything that is not exactly slim in India), and at 1.5 kilograms, it is light but still heavier than the Windows-driven 1.1 kg Micromax Canvas LapTab. There are however, a few touches that will make the Nexian Air stand out in the routine notebook and netbook crowd. The all white frame is prone to smudges but when clean, looks smart, especially with the leather band that runs across the top. And then there is the little matter of the handle. Built into the frame, it can be pulled out to carry the Chromebook a bit like a small briefcase. We had seen something similar in the iBook (remember that?) more than a decade ago and honestly, is a touch we like. The notebook closes solidly enough and can be carried as one compact case. And well, it does turn heads.

Scoring on ‘key’ issues and performance

But if the handle grabs attention, what really wins the day for the Nexian Air over most competitors was its keyboard and trackpad combination – the keys are large and the trackpad sensitive, both of which are a rarity at this price point (and above it too – if the Acer C720 had a flaw, it was its keyboard and trackpad). The 11.6-inch display goes give the manufacturers more space to spread out the keyboard (unlike the 10.1-inch one in the Micromax Canvas LapTab), and thankfully Nexian has done a decent job of it. The typing experience we have had on the device is the best we have had on a Chromebook this side of the HP 14 Chromebook, which is saying something.

In terms of performance, well, the Nexian Air is a typical Chromebook (you can find out more about Chromebooks in our Chromebook Q&A). Working on it is like being inside a massive Chrome browser with different tabs for different tasks – you can open a different window if you find that too overwhelming, though. There is no learning curve to speak of – everything is on the toolbar on the bottom of the display. Browsing, of course, is a key strength, and contrary to public belief, there are a number of apps that can run comfortably offline too. You can write and edit documents, spreadsheets and presentations with a fair degree of ease (courtesy the offline version of Google Docs or Drive, depending on what you choose to call them), even minus an Internet connection. Speaking of Internet connections, we were amazed to find the device connecting very smoothly to data dongles without having to install any drivers – this is something we have not seen even in Windows and Mac!

No, you are not going the sort of editing and formatting options that you will get with MS Office, but if all you are looking for are basic and slightly advanced functions, there is more than enough here. And yes, the Chrome Web Store comes with clear links to apps that work offline, so you can download the likes of Cut The Rope and play it without too many problems. And before you ask, while you can run some Android apps (once again, the Chrome Web Store will tell you which), do not go expecting to run Windows apps on this machine – so no MS Office or Photoshop or classic PC gaming. On the flip side, you do have some very decent alternatives available, and the device ships with word processor and presentation and spreadsheet tools, which are totally free for your lifetime. 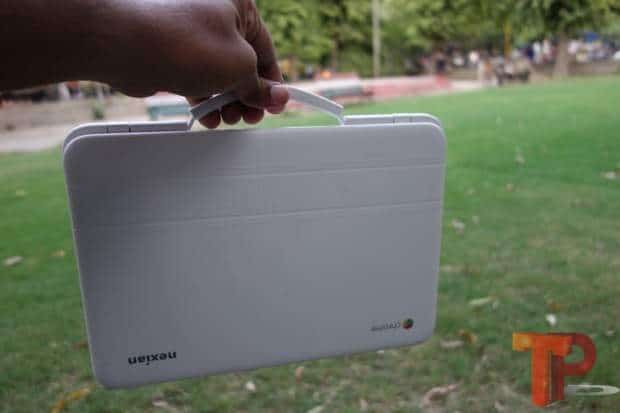 Which brings us to the two areas where we think the Nexian Air takes a beating- the display and sound. While the display is decent enough for browsing and writing, it is definitely not the type that would do justice to a film or high-definition video (the colors often look washed out) and the sound is at best mediocre in terms of both volume and quality. No, this is not a multimedia monster by any means, although you can edit images and even tweak videos to an extent. And of course, the 16 GB onboard storage, of which about 9.6 GB is available to the user (although you can store much more online with Google), is definitely on the lower side for multimedia freaks, although you can plug in a USB drive or insert a memory card to boost it (Android phones connected to the device without any issues, although they were accessible as storage devices as their bundled connectivity software could not be installed on the notebook – Windows Phone and iOS devices were not recognised at all, so data from them will have to be sent via the cloud).

But the traditional three aces that all Chromebooks have up their sleeves more than compensate for these failings – speed, battery life and price. The Nexian Air is blazingly fast and can shut down and start up in under 15 seconds, and there is very little chance of any lags in your browsing experience, although documents and spreadsheets can take some time opening up in offline mode. We always had more than twenty tabs open and switched between them without any lags whatsoever. Battery life is excellent – careful use will see you get close to ten hours on a single charge and well, even if you are less than careful, you will easily get seven to eight hours. The charger is very portable and has no ‘brick,’ although the charging process itself can be a little eccentric – we found that the notebook once would not charge until we drained it out totally. And of course, all this comes at a price tag of Rs 12,999. 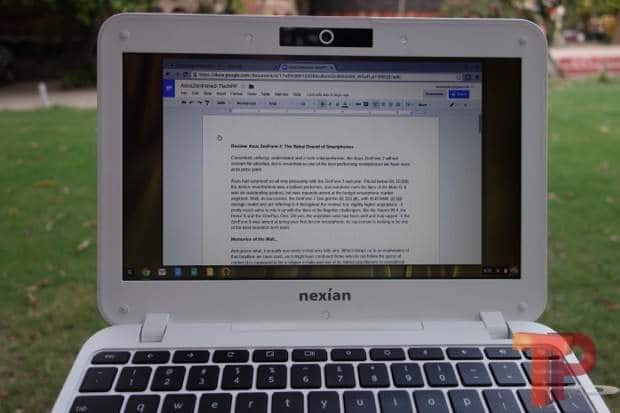 No, it is not a gaming barnstormer or a miracle of multimedia (no Chromebook is, for God’s sake). And it is unlikely to set benchmarking records. But when it comes to anything that revolves around good old fashioned typing and browsing, the Nexian Air will pretty much hold its own against most comers, thanks in no small measure to a decent keyboard and trackpad. With its white exterior (although one does have to keep cleaning it) and handle, it is also more striking in appearance than most netbooks in its price range. Add that incredible start up and shut down speed and near double digit battery life, top off with the absence of significant bank account damaging powers, and we would say that this is a terrific option for anyone who is looking at a lightweight notebook that is great to write and browse the Web on. It certainly delivers more in terms of productivity than most tablets do, thanks to that keyboard and the pre-installed office suite, even though it lacks their general app and entertainment muscle.

And honestly, that will more than suffice for most people (including my 70-year-old mum!). At its core, the Nexian Air is a writer’s notebook – great for writing, research, reading and communication. We can see bloggers, students and journalists loving it. We certainly do.

Was this article helpful?
YesNo
TechPP is supported by our audience. We may earn affiliate commissions from buying links on this site.
Read Next
How to Split Screen on Chromebook [3 Easy Ways]
#Chromebook #Nexian Air #review