When Apple introduced its iPad Air 2, the company also announced another very useful new features – the new Apple SIM. Produced by Apple, it allows users to easily switch carriers. While this is definitely a great option for iPad users, the drawback was that it was availalable only for AT&T, Sprint and T-Mobile US customers in the United States, and EE in the United Kingdom. 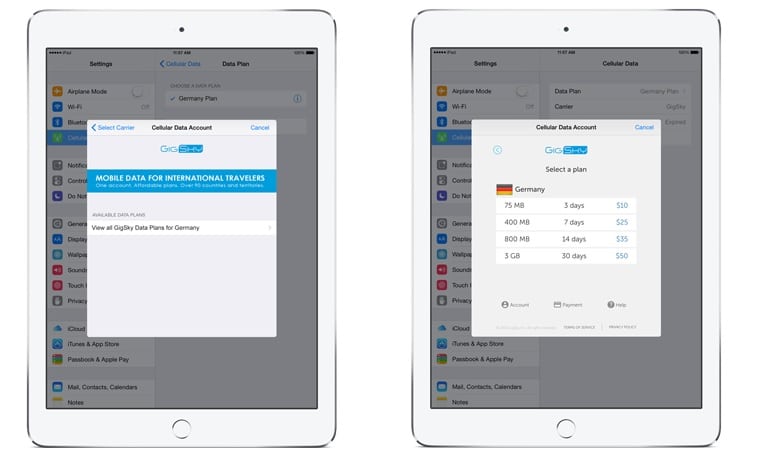 But now Apple has partnered with mobile connectivity company GigSky in order to expand Apple SIM cellular data plans to over 90 countries and territories around the world (check the entire list on Apple’s website). Thus, from now on, iPad Air 2 and iPad mini 3 users with an Apple SIM can make use of short-term data plans in their travels. Ravi Rishy-Maharaj, Founder and CEO of GigSky, said the following:

We’re elated to offer iPad users a new way to stay connected around the world. iPad Air 2 and iPad mini 3 are thin, light and great for travel. Paired with GigSky’s affordable mobile data service — easily accessible right from iPad with Apple SIM — travelers have the freedom to email, map and tweet wherever they go, without the usual challenges of connecting.

Thus, you can now purchase an Apple SIM iat Apple Retail Stores in Australia, Canada, France, Germany, Italy, Netherlands, Spain, Sweden, Switzerland, Turkey, the United Kingdom and the United States. However, GigSky comes with data plans for Apple SIM in over 90 countries. Just head over to their website and check their pricing and coverage.

I’ve checked the prices for my country and they aren’t exactly cheap, but at least they are available on a pay-as-you-go basis with no long-term commitments. Of course, if your iPad is unlocked, you can choose to insert a SIM card from a local carrier, as well.