Samsung has taken the wraps off the Galaxy J2, another budget phone from the Korean manufacturer keeping the Indian perspective in mind. Lately Samsung has been launching lot of 4G enabled smartphones to cash on the still nascent 4G LTE market in India. Samsung Galaxy J2 is priced at Rs 8490 and will be made available across multiple sales channel starting from September 21. 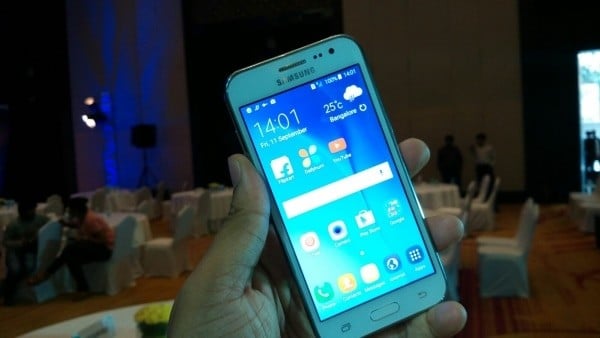 The Galaxy J2 is powered by a 1.3GHz quad-core Exynos 3475 SoC paired with a 1GB of RAM and a 4.7-inch WVGA display. Smart Manager is a new real time optimisation feature from Samsung, which will monitor the smartphones performance on real time and optimises it accordingly, thus saving up on precious RAM memory. The storage department is handled by a 8GB internal storage as opposed to the paltry 4GB on its predecessor, the microSD card slot can accommodate up to a staggering 128GB of memory, which is a rarity in this segment. 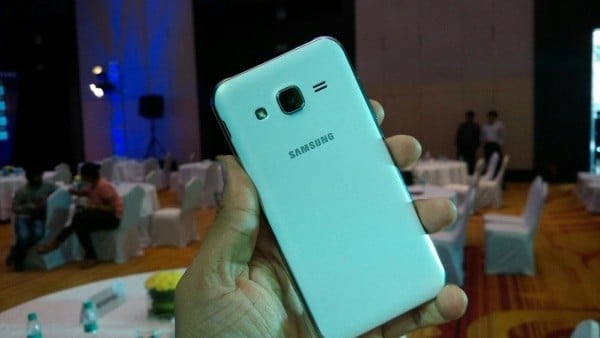 Samsung Galaxy J2 heralds with Opera Max technology which when switched on will compress data across all applications including browsers, Youtube Streaming, Messengers and many other applications. Opera Max claims up to 50% of saving on data usage with minimal impact on the content quality. Galaxy J2 also comes with yet another useful feature called the download booster, which will boost your download speeds on the same network. 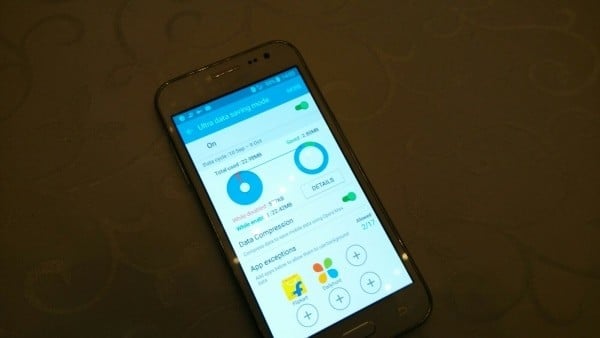 On the imaging front the Galaxy J2 features 5-Megapixel auto-focus  primary snapper and a 2-Megapixel secondary sensor. The phone is expected to run Android 5.1 (Lollipop) with the latest version of TouchWiz and will be backed up by a 2000mAh battery pack. The camera app in the Galaxy J2 boasts of some handy features like quick launch and Palm Selfie, a feature that automatically clicks the photo when you show your palm to the front camera. 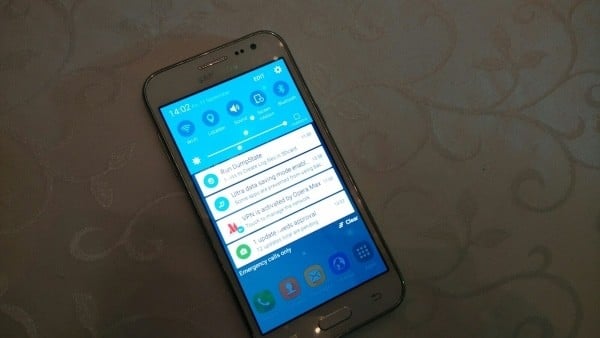 Needless to say the Galaxy J2 comes with usual bevy of connectivity options including 4G LTE, Wi-Fi, Dual SIM, GPS, and Bluetooth 4.0. Mr Asim Warsi, Vice President Marketing Samsung India confirmed that the Galaxy J2 has been developed in Indian R&D facilities, as part of the Make in India initiative.

The Galaxy J2 resembles the earlier Samsung phones but it is definitely built well and at a thickness of 8.4mm it is not at all chunky. The Galaxy J2 will retail in gold, white and black colors blended with the metallic finish and the faux leather back panel.

Samsung has been struggling to gain a foothold, especially in the budget Android market and the fact that they are still not coming up with interesting devices is not helping them. Samsung needs to at least match its step with the competitors and come with a decent spec list and a price tag that would scream “Value for Money”. Samsung is no more perceived as a premium brand and thus the smartphones won’t be able to command a higher price over other Chinese manufacturers like Xiaomi and Lenovo.