There has been a lot of fuss in recent times over T-Mobile’s recently unveiled program, Binge ON. EFF (Electronic Frontier Foundation) has said that Binge ON stands in violation of Net Neutrality. T-Mobile’s CEO, John Legere and CFO, Mike Sievert have voraciously defended Binge ON. 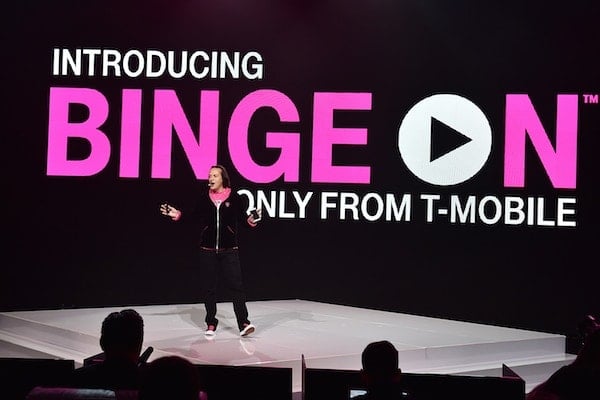 What’s Binge ON and what’s the fuss?

Binge ON is basically a zero-rated video program/platform that T-Mobile launched as part of its long running un-carrier initiative. Under this program, video streaming companies such as Hulu and Netflix that partner up with T-Mobile can have the data consumed by their streaming apps exempted from users’ data caps. Videos from Hulu/Netflix and other partners that have enrolled in T-Mobile’s Binge ON is “optimized” to 480p resolution. There’s no kind of financial transaction between Binge ON partners and T-Mobile. In order to be a part of Binge ON, partners need to meet certain technical guidelines.

Videos from companies that aren’t part of T-Mobile are “optimized” to reduce data consumption by upto 3 times. But data consumption of videos from these non-partner companies aren’t exempted from users’ data caps. Everyone is enrolled in T-Mobile’s Binge ON by default but if someone doesn’t wish to be a part of it, they can opt-out.

Everything was fine with Binge ON until certain users discovered that YouTube performed very poorly with Binge ON. To make matters worse, Youtube went on record and complained of T-Mobile throttling Youtube videos even when it wasn’t part of Binge ON.

Intrigued by all the happening, EFF decided to investigate T-Mobile’s Binge ON programme. From what they found, T-Mobile was throttling all videos on Binge ON enabled devices to a mere speed of 1.5 Mbps. By all videos, EFF meant videos that were being streamed or being downloaded from ANY website. EFF also says there is no optimization on T-Mobile’s part and that by throttling speeds to 1.5 Mbps on Binge ON enabled devices, T-Mobile was expecting the video company to automatically adjust the bitrate and resolution, and in case the video company wasn’t able to reduce the video’s quality or bitrate, it lead to stuttering/buffering. The throttling to 1.5 Mbps was only for devices that had Binge ON enabled on them, for devices that didn’t have Binge ON enabled streaming and downloading of videos was happening at much higher speeds as shown in the graph below- 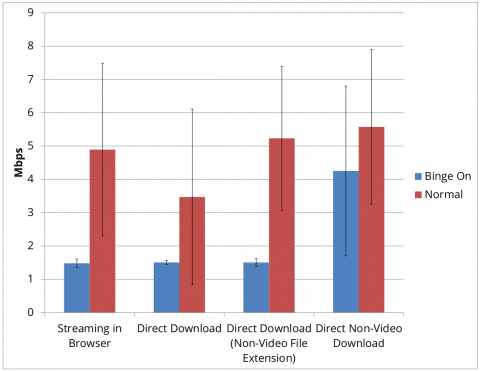 This new finding from EFF raised quite a lot of eyebrows and EFF says this is an active violation of Net Neutrality.

How does Binge ON violate Net Neutrality?

The bright rules of FCC’s are as follows

2. No Throttling: Broadband providers may not impair or degrade lawful Internet traffic on the basis of content, applications, services, or non-harmful devices.

3. No Paid Prioritization: Broadband providers may not favor some lawful Internet traffic over other lawful traffic in exchange for consideration of any kind—in other words, no “fast lanes.” This rule also bans ISPs from prioritizing content and services of their affiliates.

As far as Binge ON is concerned, the second and third rules of FCC’s Open Internet rules seem to be violated with second one being a particular concern.

Since there is no financial transaction between T-Mobile and its Binge ON partners, the financial aspect of the third point is nullified as far as paid prioritization is concerned. As EFF’s tests have shows, all videos on Binge ON irrespective of whether they are from partners or not are throttled to 1.5 Mbps. However the same videos on Non-Binge ON smartphones are streamed/downloaded at much faster rates indicating that there’s throttling of perfectly legal content i.e video on Binge ON enabled smartphones. This makes Binge ON a violator of the second rule which states that there shouldn’t be any throttling of any legal content. 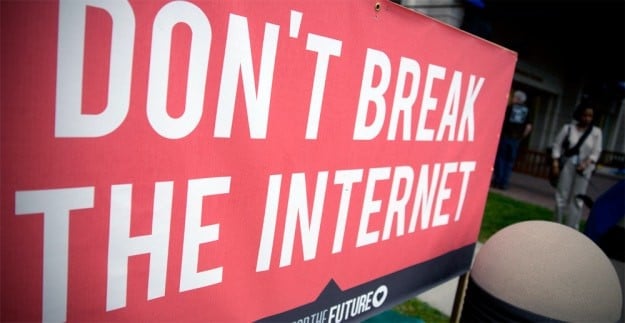 However there’s a catch here. There are three points in T-Mobile’s defence –

1. People can opt out of Binge ON if they don’t want it despite it being enabled by default for all users.

3. FCC’s Chairman Tom Wheeler himself has called Binge ON “pro-competitive”.

Following all this, FCC has decided to meet with T-Mobile to discuss Binge ON. However this might actually end up being a very complex meeting as I’ll explain below.

Binge ON can’t be shut down

As much as Net Neutrality activists might like this to happen, this might not be the best possible solution. Uncarrier initiatives like Binge ON and Music Freedom have been crucial to T-Mobile’s recovery in the US telecom market.

It’s little secret that T-Mobile has transformed the entire US telecom landscape through its uncarrier initiatives. What was earlier a struggling operator at the brink of irrelevance has become US’ third largest operator providing tough competition to both Verizon and AT&T.

This price increase in Austria has made the Eruopean Comission even more wary of the proposed acquistion of Wind Italy by Three Italy and O2 UK by Three UK. To put this in the US context, consider the recently failed merger between Sprint and T-Mobile.

As mentioned before, the only way to keep prices in check is to ensure that there are enough operators and there is enough competition. Now the economics of carriers are fairly starightforward. There is no significant way in which one carrier can save costs compared to another. Almost all operators have to invest in spectrum, follow standards set out by industry bodies such as 3GPP, procure equipments from a particular set of companies like Nokia, Ericsson, Huawei, ZTE etc and build out networks from a particular set of tower companies. 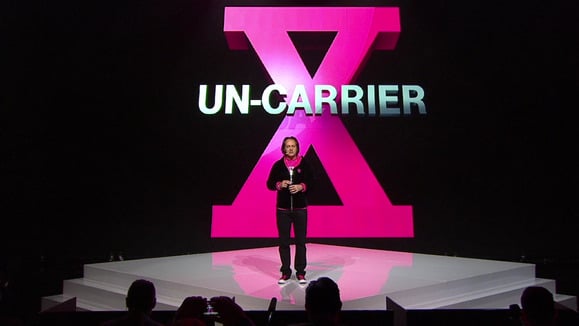 If operators are only allowed to offer basic data packs with no specialization, there are only two ways they can compete i.e

1. Quality of their network
2. Price

The strong ones i.e the incumbent operators can manage to charge a premium on their data packs, on the basis of their higher network quality. They can then earn better profits and continue to expand and invest in next generation networks like 5G.

The weaker ones owing to their inferior network quality would have to charge lesser for their data packs and earn lesser profits or maybe operate at a loss. These lesser profits and losses would reduce their ability to invest in next generation networks and they would eventually wither away.

To provide some context, consider this. Compare how many operators provided basic voice services and EDGE, how many provided 3G and how many are providing 4G. You’ll notice that with every stage from basic EDGE to 4G, the number of operators just kept reducing.

Programs such as Binge ON and Music Freedom are a type of carrot that helps operators such as T-Mobile attract users to their network and maybe convince them to pay more or even equal despite having inferior network quality compared to say Verizon or AT&T. There was a financial gain hidden in Binge ON. It is only available to T-Mobile customers that are on plans greater than or maybe equal to 3GB so that T-Mobile can improve its ARPU. Also with the launch of Binge ON, T-Mobile had been able to raise the rates of various plans with doubling of data allocation.

At the end of the day, Binge ON allowed T-Mobile to improve its ARPU thereby increasing it porfitability in the long term and its ability to invest and improve its network.

Positive effects of T-Mobile on the industry

1. Contracts – T-Mobile moved completely to an Equipment Installment Plan in 2013 and started a trend in the telecom industry. While I’m writing this, almost all operators in the US have signalled their willingness to completely abandon contracts thereby creating a free market for smartphone manufacturers. Amongst various reasons contracts were probably the biggest enabler to Samsung and Apple’s strong hold in the US market. The contract system’s design was in such a way that it favored high end smartphones more than mid range/low end smartphones. I’m not saying that the move to Equipment Installment Plans will allow Huawei and ZTE to blossom in the US smartphone market, but at least it would provide them a level playing field. T-Mobile has brought much needed neutrality to the smartphone distribution of the US telecom market.

2. Increase data allocation – Following T-Mobile’s aggressiveness, both AT&T and Verizon started offering much better data plans/discounts on their offerings between 2014-2015. When the cost-per-GB goes down, the video streaming/hosting companies are the ones that benefit the most. In fact AT&T has also brought back unlimited plans for users who subscribe to DirecTV. With AT&T bringing back unlimited plans, it’s again these video streaming/hosting sites that benefit the most and a big reason behind AT&T bringing back unlimited is T-Mobile.

When FCC meets T-Mobile, they can ask T-Mobile to make certain changes to Binge ON such as stop throttling non-partner sites and make Binge ON opt-in. Both these measures can make Binge ON much more neutral but then again the final decision rests with T-Mobile. If T-Mobile wants, they can follow FCC and make the required changes to make Binge ON more neutral or they can completely withdraw Binge ON if the terms aren’t favorable. If T-Mobile withdraws Binge ON, AT&T can withdraw its unlimited plans as they seem more of a direct response to Binge ON. Sprint and Verizon can also hold back their plans to counter Binge ON. If all this happens, it’s the end consumer and streaming companies that are at loss more than anyone else. T-Mobile’s Binge ON restricts Youtube, but the same Binge ON prompted AT&T to offer unlimited data and who else to better benefit from this than Youtube. Unlimited data means people will watch more videos and given that Youtube is monetizing through ads mainly, more views = more money.

If you’re Tom Wheeler, then it’s gonna be a tough week for you. As a regulator, FCC’s work is to maintain competition amongst telecom operators, look for consumer interests and maintain an Open Internet. However all three are tightly interlinked and don’t work in vaccum. A balance between all three is required to for the best benefit to the entire ecosystem. If Net Neutrality is strictly enforced, it actually puts weaker operators at a disadvantage, gives more leverage to incumbent operators and rises price for end consumers which indirectly affects video streaming sites. Similarly, if Net Neutrality is not enforced at all, it gives the incumbent tech companies an easy way to kill competition.

Was this article helpful?
YesNo
TechPP is supported by our audience. We may earn affiliate commissions from buying links on this site.
Read Next
How to Download Netflix Movies and Shows on Any Platform [2022]
#Binge On #Net Neutrality #netflix #t-mobile #Telecom