One of the biggest challenges facing smartwatches and fitness bands is appearance – for, barring a few worthies like the Apple Watch and the Moto 360, they tend to look a bit on the ordinary, chunky, geeky side. And that is something they can ill-afford. After all, they are going up against the good old wristwatch, which tells its user the time and the world his or her idea of style. That said, it cannot be denied that the high-end watch segment is slowly but steadily coming under pressure from the smartwatches – people do love getting more functions on a watch. The smartwatch versus traditional watch battle is one between form and function, and it is these two that Timex tries to blend in its Metropolitan+. 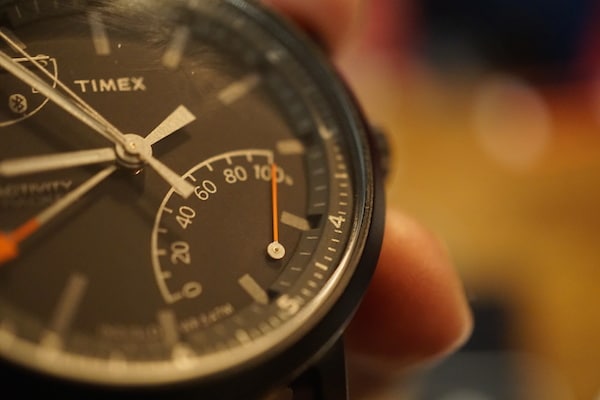 Timex might call the Metropolitan+ a “fitness tracker” but make no mistake about it, this is pretty much a wristwatch first. It comes with a rather large 1.65 inch case (there is only one size option, so we really think this is one for the men) which is about 12.5 mm thick. That is pretty close to the 42mm Apple Watch, and while we do not have its accurate weight, it did seem to be close to its weight – it might be a tad heavier, though.

However, there the resemblance between the two devices pretty much ends. For unlike Apple’s digital wrist wrapper, the Metropolitan+ is an analog device. And it comes with an absolutely round case, complete with hands that tell you the time. There is no way that you can mistake it for a smartwatch from a distance – actually, you cannot even make that out from close up. This is a very good looking wristwatch – we got the black version with hands that had red accents and well, we really think it would be right at home in corporate board meetings. It is built on solid lines – the case is metal and is water resistant. 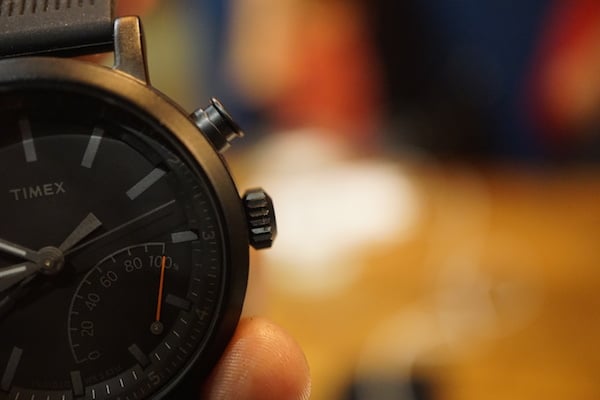 Get into Sherlock mode and you will see, however, that this is not exactly your run of the mill analog wristwatch. The first give away is the presence of two crowns – one at three o’clock and the other at two o’clock. The first’s role is traditional – set the time and as this is a Timex, long press it to make the watch glow for a few seconds. However, it is the second one that brings in the smartness. Although at first glance, the Metropolitan+ might seem like a conventional analog watch, peering closely at the watch face with reveal that there are actually three dials instead of the routine one (which shows the time), and that just outside the normal twelve bars for the hours of the day, there are etched the numbers 1-15.

And it is here that the second crown comes into play. Of the two additional dials on the watchface, one (the one on the top) is a sort of mode indicator, with steps, distance, Bluetooth and an option to switch off the sensors if need be. The second dial, which is a bit larger and is on the lower portion, shows, figures from 0-100 and is actually a percentage representation. Oh, and those numbers from 1-15 right above the time bars? Each number represents a thousand steps. Long pressing the second crown moves the needle on the top watch face to steps, distance or Bluetooth, depending on how long you keep it pressed (it moves from one option to another), and based on which option you release it on, the needle on the lower dial will show you the percentage of steps taken or distance covered of your preset goal. Oh, and the numbers on top just keep count of your steps, letting you see them at a glance. 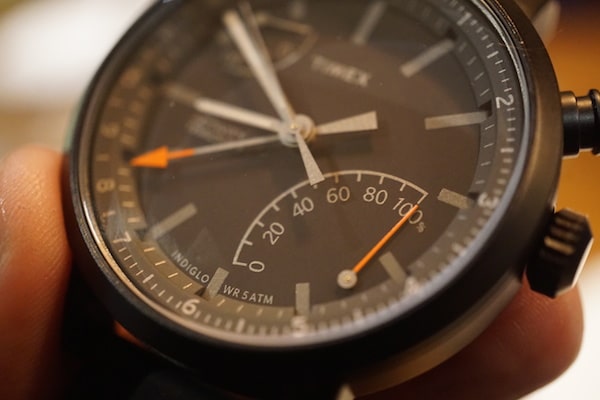 You will, however, be pressing the second crown, first of all to get, your watch paired with you iOS or Android device over Bluetooth. The process is rather simple once you have downloaded the companion Timex app from the relevant app store. Opening the app will, however, also reveal to you how utterly basic the device is. To be brutally harsh, the Metropolitan+ is a wristwatch with a pedometer. You have to enter details of your height, weight and age and set goals for steps and distance, indicate sensor sensitivity and then get going with your day.

Checking your progress is relatively easy – a glance at the watch and a press of the second crown to see how you far you are off your goal. Or if you want numerical detail, just get the needle to the Bluetooth icon on the watch, open the app on your phone and tap on the sync option to get numbers on your progress. No, there is no heartbeat sensor, no detailed graphical representation of your performance (there are some graphs if you dig a little in the app, but nothing too detailed really), no tracking of stairs climbed and no sleep tracking either, although Timex says work is on in that regard, and the feature should make its way to the device in the coming weeks. 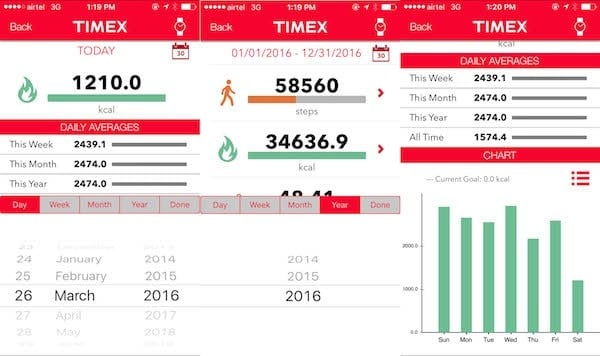 The distance and step counter work well enough – when we kept the sensor sensitivity at medium, the count seemed a bit lower than what we had seen on the Apple Watch, but seemed to get to unreal levels when we turned the sensitivity to high. Our recommendation is to stick to medium, really. We really wish more had been done with the app – all you get is distance and steps and calories burned. A bit more analysis and messages about comparative performances would help. And there is no community aspect either so don’t think of going about asking to challenge your friends or console yourself by seeing how far they are lagging behind their targets. And before you ask, there are no notifications available – so don’t expect to get alerts about calls, texts, mails and social network activity here.

All of which might make the wearable faithful throw up their hands in despair and wonder what the fuss is about. Well, it is about the core strengths of the traditional wristwatch. The battery life of the Metropolitan+ is a solid year and a half – no need to worry about recharging it during that period – and the watch takes the usual “dot” cell that can be fixed by any Timex service center. The same applies to traps – they can be changed easily and require nothing special – standard stuff for wristwatches. Oh and don’t worry about damaging the glass covering the watch – it can be replaced for a few dollars. No display blues here! 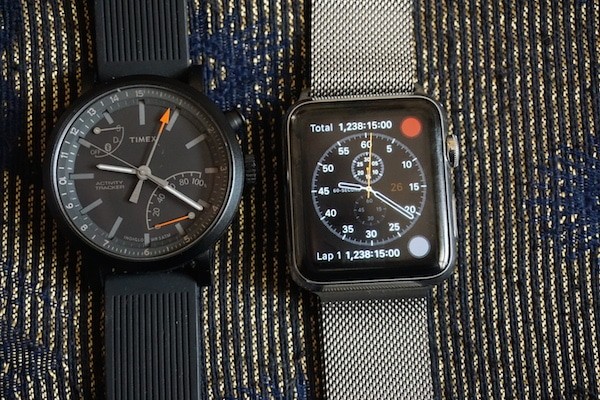 Which in our opinion is what makes the Metropolitan+ very much an instance of The Empire Strikes Back (to laps into Star Wars-ese). At a time when many manufacturers are trying to get on to the smartwatch bandwagon and compromising on “basic” wristwatch features like display and dials, watch straps and battery life, Timex has pretty much gone the other way around and simply added a small feature to what is essentially still a wristwatch. We do think the software could do with a lot of work – if you have so much user data then you should be be able to do more with it. But when you consider that the Metropolitan+ has a price of Rs 9,995, which is about half of the Moto 360 (2nd generation) and about a third of the Apple Watch, is every bit as good looking if not better, and is not plagued by the battery and strap issues that affect those worthies, then it actually does not seem that bad a deal. No e-mail, calls or messages on one side, but on the other are no recharging worries, very good looks and reasonable enough fitness data.

It is not a computer on your wrist, but then many of us do not seek that. It will show you distance covered and steps taken, but those are just add ons. The Timex Metropolitan+ is primarily designed to show you something far more basic.

It is smart, yes. But it is a watch first. And unabashedly so.

Was this article helpful?
YesNo
TechPP is supported by our audience. We may earn affiliate commissions from buying links on this site.
Read Next
Stuffcool PB9018W Magnetic Wireless Powerbank Review: Actually the perfect iP...
#review #Smartwatch #Timex #Timex Metropolitan+