So permit me a slight digression into sport at the very beginning of a tech review. The game of cricket is supposed to be India’s ruling passion. The object of the game is to score as many runs by hitting the ball with a bat. Some batsmen choose to hit the ball as hard as possible and aim for clearing the boundary, being spectacular. Others just nudge it around, push it here and there and keep scoring without too much of a fuss. 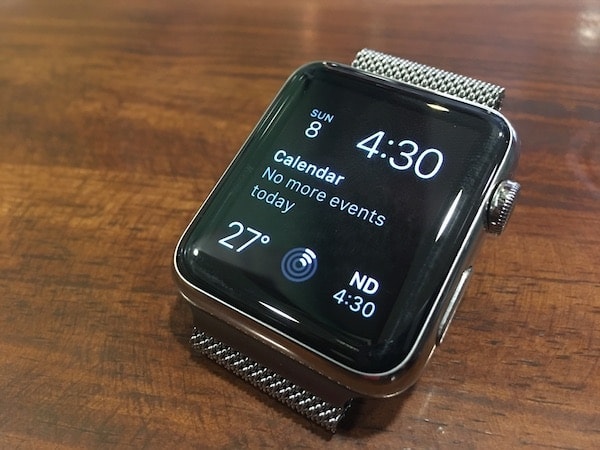 Just released in India (we are not going into the “why so late in India” debate here – that is the company’s call, really), the watch is perhaps the world’s most talked about wearable and has been discussed threadbare – which is why we did not go into first impressions mode with it. It already has been seen on so many wrists for so long now. We don’t know how many units it has sold, although Apple insists it is doing well. What it definitely HAS done is established the wearable segment as part of the gadget market with just about every tech manufacturer having some sort of gizmo that you can slap on to some body part (we think that Apple actually sold some of them a dummy there, just as the Russians did to the US with the so-called Space Race).

It is also perhaps the most nuanced device to come out from Cupertino from a while, perhaps since the iPod shuffle. A device which does not scream for attention (unless you have got an Apple Edition of course, which hollers “Here I am, This is Me!“), but which makes its presence felt gently and once you get the hang of it, its absence even more so. 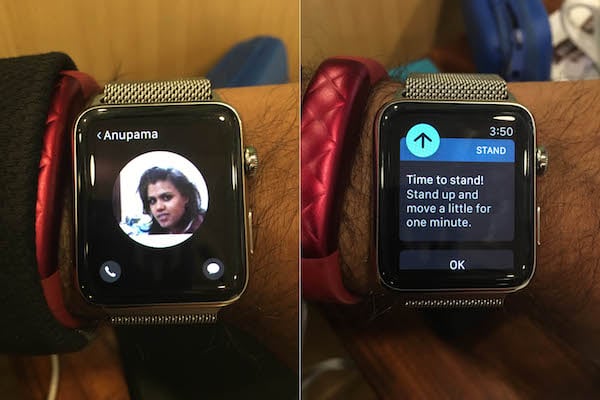 Let´s get one thing out of the way – the Apple Watch looks very classy indeed. We got the Apple Watch version (not the Sports or the Apple Watch Edition) with a Milanese Steel band. And much though we loved the Moto 360 (which we think is its only real competition), even it did not quite look this stylish. The stainless steel shines without glittering too much and the Milanese Loop band is infinitely adjustable – in place of the buckle is a magnet which you just place on the band to suit the level of tightness you wish. A very neat touch is the presence of two buttons behind the watch which let you disconnect the strap. You can simply slide in a new one – no more trips to the watchmaker for that one then.

And yes, the ‘crown’ makes it look like a real watch, although its location is perhaps the best way of spotting an Apple Watch. Mind you, we find the button next to it a trifle odd – at least two people felt it was something that would come off to accommodate a SIM or a memory card, although it is built on solid lines. Apple’s decision to use an AMOLED display means that the watch looks a rich dark black when the display is not on and also makes anything against a black backdrop look beautiful. The watch in itself is not too heavy and not as bulky as some would have you believe – it will not feel uncomfortable on most male wrists, although we think the ladies would prefer the smaller 38mm version.

Of course, we did expect Apple to get the looks of the watch right. The real charm, as in all Apple devices, is in the software and user experience. And well, here we must confess to feelings that are definitely mixed. On the one hand, there is no doubt that the Apple Watch is a level above anything the Android Wear crowd can offer in terms of ease of use. The interface is very simple – swipe down for notifications, swipe up for information from your favourite apps (what Apple calls Glances), hit the side button for viewing your favourite contacts, and hit the crown for going back to the home screen, and if already on the homesceen, then hit it to view the apps on your device. You can select apps by swiping and tapping on the rather responsive display or simply centering on an app and zooming in using the crown. You can also use the crown to zoom into pictures incidentally. 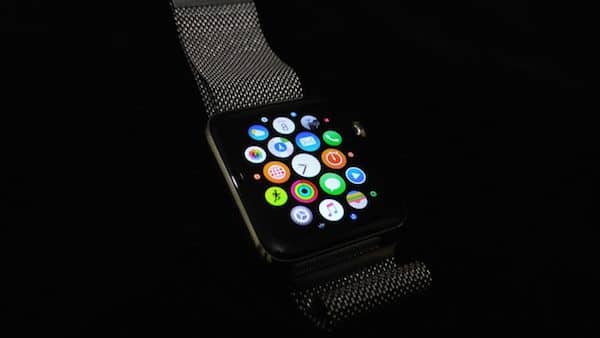 And it all does work a whole lot more smoothly than we have seen on most Android Wear devices where it is difficult to remember in which direction to swipe to get which function – truth be told, most people I know bumble along until they get to the place they want to be. No, there is no “killer app” available on the Apple Watch yet in our opinion – it is a notification device at its very best, pulling information from different apps on your iPhone (it needs to be connected to an iPhone over Bluetooth to work). It can track activity and allows you to make and receive calls like other smartwatches but it is the how that makes it stand out – I personally loved the gentle ‘tap’ with which the watch alerted me to a new notification or a call. It was unobtrusive and yet noticeable. What was also noticeable was the fact that we actually reduced our phone usage while using the Apple Watch. It just seemed easier to respond to calls with messages, and track social networks from our wrists and just for the record, the Apple Watch does light up when you look at it most times, unlike some of its competitors.

But of course, when it comes to the crux, most people will ask: what does the Apple Watch do that Android Wear’s best (and it is fair to compare it only with the best, given its price point) cannot? The answer is: well, nothing that seems significant. On paper it pretty much does what most other smartwatches do – sends notifications and alerts, helps in navigation, allows you to handle calls and texts, and monitors activity. Yes, there are a few touches like the option to send a heartbeat to another friend wearing an Apple Watch, but really, on paper, in functionality terms, the Apple Watch does not really break new ground – something we had pointed out at the time the watch had been unveiled, stressing that in terms of sheer features, Android Wear had not much to fear from Apple’s wearable. On paper. 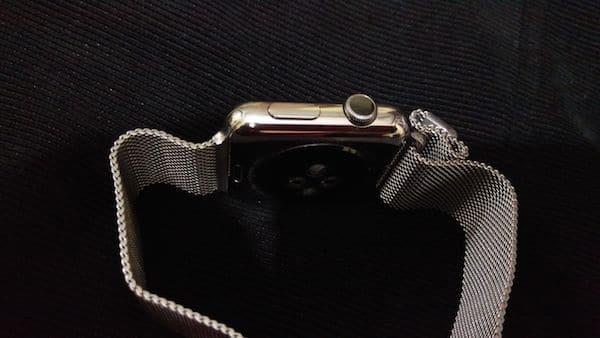 Note the reference to “on paper,” though. For while the Apple Watch pretty much offers what Android Wear’s creme de la creme serves up, it does so very differently. Pairing is as easy as pointing your iPhone at the watch when prompted by the Apple Watch app (it opens the camera) – no fiddling with Bluetooth and looking out for passcodes that appear on the two displays. The gentle taps on your wrist work better than buzzy vibrations. And if you have been using her regularly, Siri will work more smoothly off your wrist than Google’s voice based assistants, and well, we honestly found calls working much better too (although we STILL felt more like The Joker than Tony Stark while talking to it). We like the way the activity tracker shows up activity in three colours and well, the high quality of the display quality saw us reading mails on the watch rather than the phone – no, that has not happened with any of the Android Wear offerings. Pictures looked very good on the AMOLED display and we loved the sheer smoothness with which the crown moved. And while there’s no “killer app,” the more than 12,000 apps on the App Store offer far more than those on Google Play (yes, we are working on a feature on the best ones – stay tuned), and are easier to access from within the Apple Watch app. Even the initially awful battery life seems to have been given a boost with Apple Watch OS 2.0.1 – found our Apple Watch lasting a day and a half of normal use (no switching off at night) and even two days with careful handling. No, it is not perfect, but it is inifinitely better than the “one-charge-a-day-and-start-looking-for-a-power-outlet” days of the not so distant past. And then there’s our absolute favourite feature – the Wrist Detection feature, which locks the watch when you are not wearing it.

So should you buy an Apple Watch? Three days into using the device, my answer would have been “only if you want the best wearable around and money is not a problem” – for starting at Rs 30,900 for the base Sports model, it is very expensive (you can get a Moto X Style for lesser). That said, it is easily the best smartwatch in tech town by some distance, in terms of usability and design. Almost a week into using it, my answer remains unchanged, but there’s a new element to it. For, yesterday, the Apple Watch did something did that none of its Android Wear brethren had been able to in over a year. 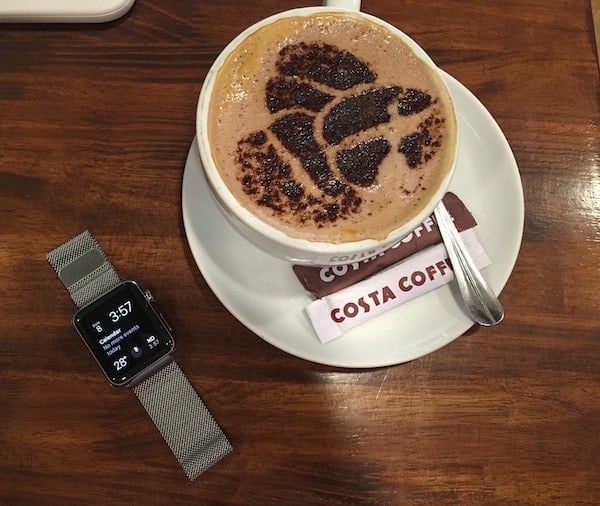 It made me tap the display of a “real” watch and mutter irritably when nothing happened.

It made me realise that the Apple Watch has something the competition does not have. Something that goes beyond specs and apps on paper and even design.

It will not “blow your mind” while it is around (honestly, its price is likely to stun you more), but when it is away, it will make you sigh when you look at your wrist and only see the time. And wonder why you don’t feel a tap on your wrist when you remain seated for a while, advising you to get up and take a short walk. The Apple Watch does not pull you into a new world of possibilities. It nudges you into it. Gently. Elegantly.

Just like those batsmen who eschew brute power and instead depend on a silken movement of the wrists, a gentle dab, an ever so slight cut, to keep scoring.