Most of the OEMs ensure that they reserve the best and most appealing designs for their flagships apart from loading them up with the latest and greatest hardware. But what if some of you just wanted the looks of the flagship but some mid-range hardware will just do fine for your usage? We saw Samsung do this with their “A” series though the pricing was almost there in the string distance of their flagships and now LG takes their turn to do something similar, while also ensuring that the price is very affordable. Welcome the “K” series from LG and entering the Indian market will be the duo – K10 and the K7. We have been using the phones for a few days now and here we present our initial impressions of the two very similarly built phones. 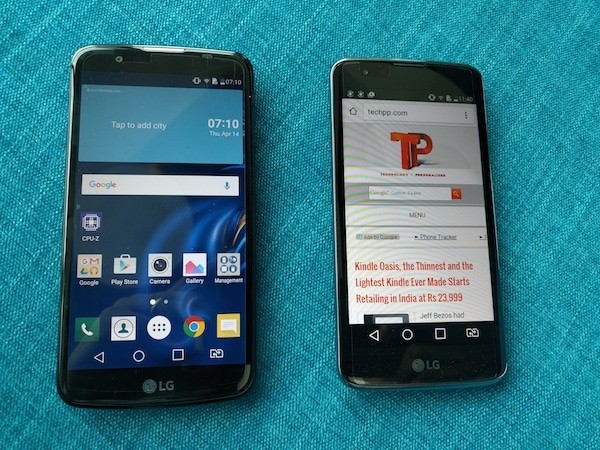 The first thing you will notice about both the phones is the striking resemblance they have with their big brother – the LG G5. Be it the contour, the rounded edges or the 2.5D curved glass. The K10 is the bigger of the two coming with a 5.3-inch screen while the K7 comes with a 5-inch screen. While the K10 comes with Gorilla Glass 3 protection for the display, its tough tomatoes for the K7. Surprisingly the K10 is lighter than the K7 by almost 20 gms (latter weighs 161 gms while the former weighs 142 gms). The K10 and the K7 are 8.8mm and 9.1mm in thickness respectively.

The phones come with a metallic rim going all around the edges and that subtle shine along with the curves give it that premium look. It’s such a pleasure holding these two phones as they fit so well into the palms and in an era where phones are made to slip fast, LG has done a good job in providing plastic textured back that ensures the phones don’t start sliding off your hands or a surface. And while we are at the back of the phone, LG will bring their trade mark power and volume rocker set here. The volume rockers are curved and sport dotted texture while the power button has a ribbed texture. All of this ensures a seamless usage and faster onboarding to the paradigm of no buttons on the sides. Trust us on this, making that switch is simply not easy! 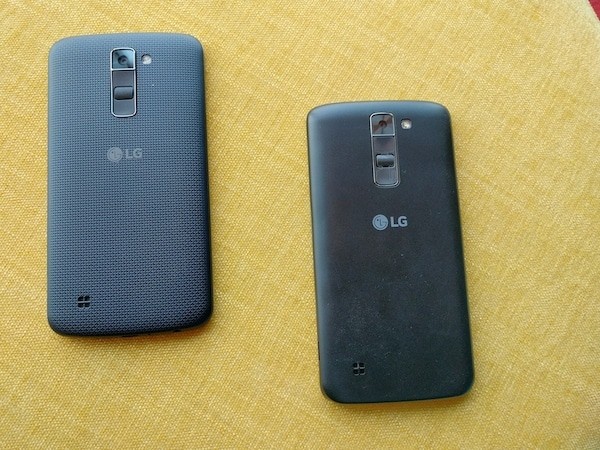 Overall, we are looking at a very well-crafted set of phone that sport well thought thru designs and while lots of plastic finds its way into the build, elegance overshadows the compromises.

Going under the hood, as you take the removable back off is the Qualcomm Snapdragon 410 SoC and Snapdragon 210 SoC clocked at around 1.2 GHz on the K10 and the K7 respectively. Both the processors are Quad core based. Accompanying these will be 2GB and 1.5GB of RAM respectively. With 16GB and 8GB of internal memory that can be bumped upto 32GB via micro SD slot, the K10 is powered by a 2300 mAh battery and the K7 has a 2125 mAh battery. Both are removable and there is no quick charge support here. As you can tell, the power under the hood is very limited and indicates clearly that this may not be the phone for the power users. More so with LG’s thick skinned custom Android UI on top of Lollipop 5.1 will be an interesting one to observe as we review the phone. 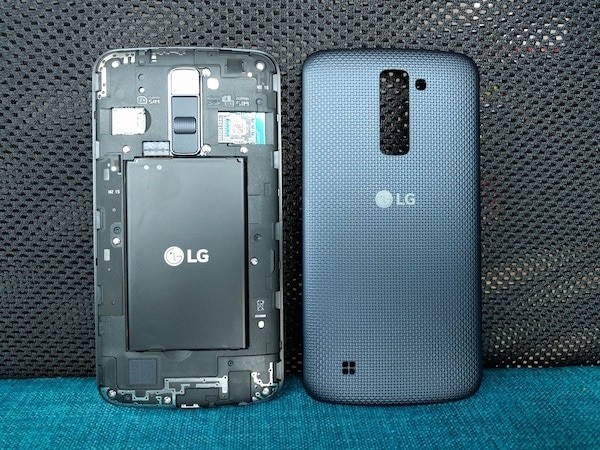 The software overall, though not butter smooth, did not struggle much as in our limited usage. The screens though having a mediocre pixel density, the colors popped out well and the viewing angles too were good, with the LG UI’s typical color schemes. Double tap to wake and lock is very much available and most of the UI reminded us of what we’ve seen in most of the LG’s phones.

Where the power rises again is the camera department. K10 has a 13MP f/2.2 autofocus camera module as its primary and a 5MP shooter as the secondary, the K7 has a 8MP primary and a 5MP secondary shooter. In our initial and minimal testing, both the phones produced decent pictures. We are looking forward to see what these phone cameras can do.

With features like dual sim LTE, FM radio, removable battery and ability to add more memory the K10 and K7 that are prices around Rs 13,500 and Rs 9,500 will make a lot of sense for those who are looking for a non-Chinese small screened phone with good design and camera with engines inside that will get them thru with their light and normal usage.