Smartphone thefts are nothing new and it has been one of the most painful thing that can happen to a person. With phones being a treasure cove of personal information, it becomes inevitable to safeguard our phones and the data in it. iPhone has been the smugglers favorite and illegal iPhones have been in rage in countries like Brazil, where they fetch a handsome sum of money. 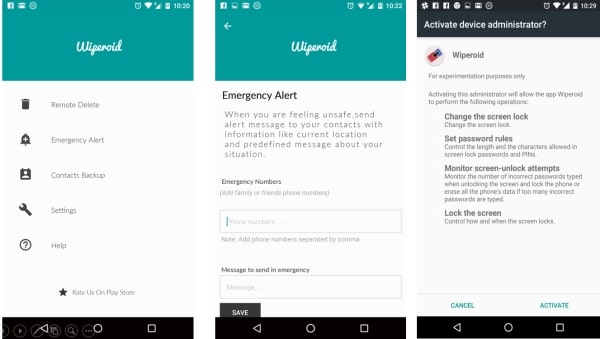 I have been personally using Lookout on my phone from past couple of years but when I lost my Sony Xperia it was of little use. The GPS failed to track the phone since it was switched off and that was pretty much the end of it. Phone trackers suffer from a perennial problem i.e their dependency on Internet. Wiperoid is one such app that has tried to solve this problem by building a phone tracker that works offline and can be controlled by SMS.

Wiperoid comes with a bare basic UI along with features like remote delete, emergency alert, contacts backup and settings. The remote delete option seems to be the most interesting one as it lets the user put up the important files which can be later deleted remotely. Let’s say that you have a bunch of important files that are valuable assets for your business, all you need to do is put up the files in remote delete option and in case your phone is lost or stolen these files can be deleted through an SMS.

Emergency Alert will let users preset a close friend or family number. In case of an emergency, one could send their coordinates to the predefined emergency number. This feature can shape up as a very useful one for safety of women.

Contacts backup feature will let you backup contacts and manage them by sending an SMS.

It is very important that a phone tracker functions as it is intended to, if this doesn’t happen then the user will not only be unable to find his phone but also lose access to his data. The remote delete feature worked great. I just used another device and sent out the SMS to my number with the following syntax “Wiperoid your_app_password delete” as expected the data was erased just with an SMS.

SIM change alert is yet another useful feature, once the thief removes your SIM card and inserts his own, the user will get an SMS with the number details. The app also lets you get a call from your stolen phone so that you can pick up cues from the conversation. 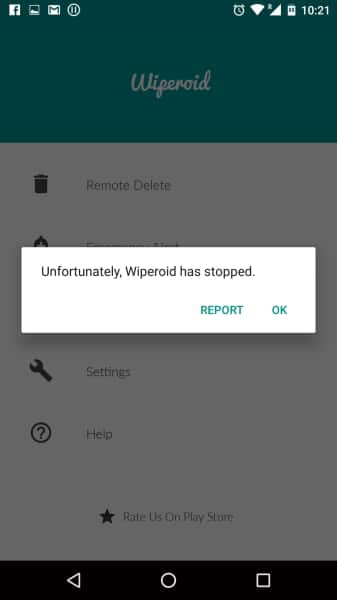 Emergency alert didn’t exhibit consistency it worked the first time and after that the feature stopped working, something the developers should take a look at. The contacts backup feature forced the app to crash and restart, yet another downside that needs to be taken care of. Wiperoid still seems to be a work in progress and we hope that in the upcoming iterations these issues will be sorted out thus making it a very useful app for safeguarding our smartphones. A real good alternative for Cerebrus maybe.

Was this article helpful?
YesNo
TechPP is supported by our audience. We may earn affiliate commissions from buying links on this site.
Read Next
Voila AI Artist: Cartoon Yourself with the Power of AI
#app review #cell phone tracker #iphone tracker #Wiperoid