Xiaomi has been known for experimenting with various gadget categories like a toothbrush, rice cooker and more. However, today, the Chinese OEM has revealed the much-rumored ultrabook titled “Mi Notebook Air”. Targeted directly at Apple’s lineup, Xiaomi’s offering claims to feature better hardware in a comparatively compact body yet maintaining a cheaper price tag.

For starters, Mi Notebook Air flaunts an admirable all metal build with edge-to-edge bezel aesthetics measuring merely at 5.59mm and a Full HD 13.3-inch panel up front. Furthermore, the device weighs only 1.28 Kilograms making it a hair beefier than Apple’s Macbook Air, although, Mi Air packs all the necessary ports including a standard HDMI, 2x USB 3.0 and a single Type-C slot. In fact, the laptop shares a close resemblance with Microsoft’s Surface Book which isn’t really a bad thing. 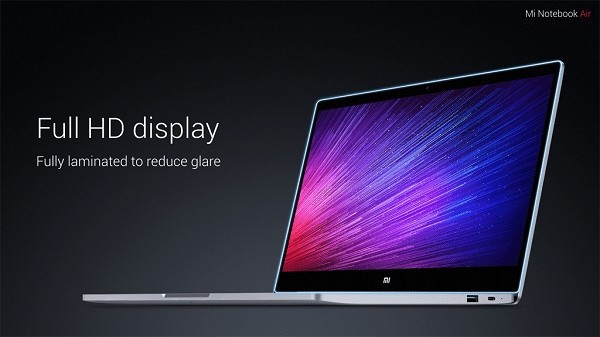 The Mi Notebook Air is powered by Intel’s i5 6th Gen Dual-Core processor clocked at 2.7Ghz, 8GB DDR4 RAM, 256GB PCIe SSD which is fortunately, user expandable and promises 9.5 hours of battery life. Additionally, Xiaomi claims it can be charged 50% in about 30 minutes which is quite commendable if true. The laptop runs on Windows 10 and additionally, comes with pre-installed with Xiaomi’s Mi Cloud Sync and can be wirelessly unlocked with the Mi Band 2 using Bluetooth 4.1.

The Mi Notebook Air with a dedicated NVIDIA GeForce 980MX GFX card will cost you ¥4999(~$750). However, there’s another variant that offers a 12.5-inch display, Intel Core M3, 11.5 hours of battery backup and is priced at ¥3599(~$540). The Mi Notebook Air will be launching on August 2nd in China with no word on global availability as of now. We do wish unlike other region exclusive products, this one crosses China borders. Xiaomi’s introductory entry into the laptop business will definitely turn some heads given the price and hardware. Although, it is worth pointing that Apple may be soon refreshing its MacBook lineup, something that a whole lot of buyers are looking forward to.