Acer Unveils Swift 7, the Thinnest Notebook Yet and Spin 7 Convertible at IFA 2016

Every laptop manufacturer out there is currently attempting to claim the world’s thinnest laptop title whether it’s Asus’ 11.9mm thin Zenbook 3 or Apple’s bareboned MacBook or HP’s Spectre 13 . However, today at IFA 2016, Acer displayed its new Swift 7 and Spin 7 notebooks, the former measuring merely at 9.98mm in thinness, crowning it as the first ever laptop to slide under the 1 cm mark and the world’s thinnest laptop now too. Despite the unbelievable attainment, though, Acer has managed to include the majority of essential ports and power under the hood. 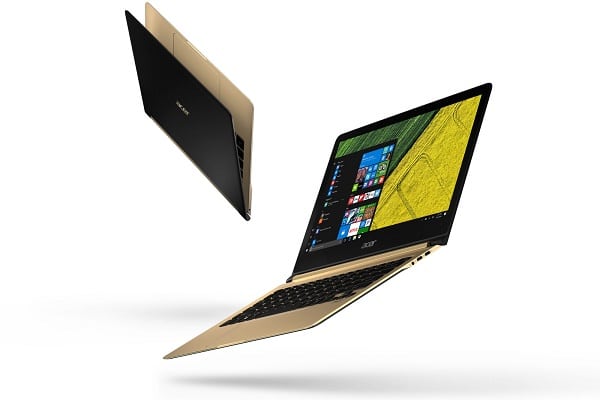 To begin with, the Acer Swift 7 features a 13.3-inch Full HD IPS panel, Intel’s 7th Generation Core i5 processor, 8GB of RAM, 256GB of SSD and the Intel Kaby Lake chip, all operating under a completely fanless system. For design, Acer has opted for an elegant-looking aluminium unibody chassis with black and dark gold accents inside and out. There are two USB 3.1 ports, a headphone jack, and Acer promises a 9-hour of battery life which does sound quite too good to be true, although, we won’t conclude our opinions just yet. Furthermore, the machine weighs merely 1.1Kg(2.48 pounds) and comes with possibly, the widest trackpad ever to exist on a portable computer. Unfortunately, there’s no touchscreen but Acer has another new product in the store if you desire a more unconventional laptop use, Spin 7. 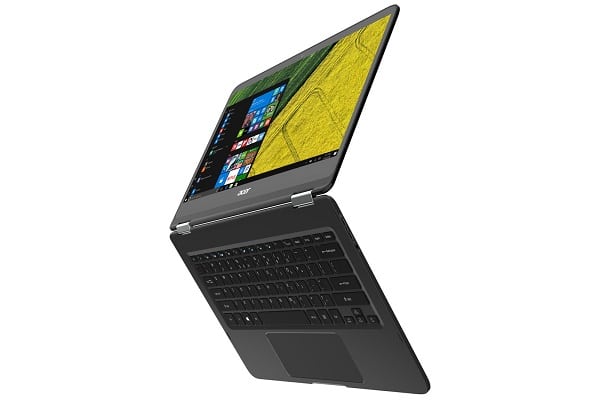 Acer’s new Spin 7 is aimed at advanced users looking for a complete package, although, the philosophy behind the design is identical with the added weight and thickness. For starters, Spin 7 adds a rotating 360 degrees hinge and a touch screen for tablet purposes. There’s a 14-inch Full HD panel and it is a hair thicker(a single millimeter really) than the Swift 7. Additionally, the specifications have been bumped up too with an Intel Core i7 processor, 8GB of RAM and 256GB SSD. Spin 7 is also a bit heavier weighing at 2.6 pounds(1.17Kg), although, the number of ports available has been kept the same. In terms of battery life, Acer claims that the Spin 7 will last 8-hours for a general user.

Acer Chromebook Spin 713 announced alongside a range of new devices
Read Next
Source: The Verge