Xiaomi may be adding yet another device to their kitty, and reports coming from China reveal that it’s none other than the Mi5c. After having launched the Xiaomi Mi4c exclusively in company’s homeland last year, it won’t be a surprise to see the Chinese firm doing the same this time around too. The alleged Xiaomi Mi5c has, in fact, been captured in hands-on images leaked on popular Chinese social networking platform Weibo.

Xiaomi Mi5c had apparently made its way to GeekBench a few weeks back as a device codenamed as Meri. The listing reveals that the upcoming smartphone from Xiaomi will come with an unknown 2.2GHz octa-core processor which we believe is the Helio P15. This, in fact, is the same processor as found in the recently launched Moto M from Lenovo. Apart from that, the Xiaomi Mi5c is said to come with MIUI 8, 3GB RAM, 64GB ROM and Android Marshmallow 6.0 out of the box. Now, the upcoming mid-range smartphone from the top tier Chinese brand has now been leaked via hands-on images. It’s worth noting that the real life images of the smartphone correspond with the previously leaked renders. 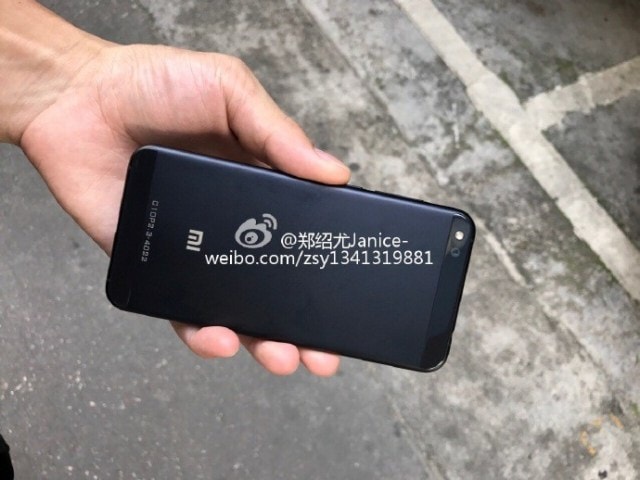 In a surprise move, Xiaomi is expected to ditch the matte finished polycarbonate body of the Mi4c to opt for a premium metal with fused glass exteriors for its successor. This gives it a looks that’s quite similar to the company’s current range of flagship products namely the Xiaomi Mi5 and Mi Note 2. That said, the leaked images make us believe that the phone has a bar-like design and doesn’t curve at the edges like its other two siblings. Talking about the specs, it’s also reported that the smartphone will come with a 5.5-inch Full HD (1920 x 1080p) 2.5D Curved IPS LCD display and a Fingerprint sensor embedded onto the home button found on the front of the smartphone. Besides, it goes without saying that just like any recent generation smartphone, the Xiaomi Mi5c will come with 4G LTE support.

Xiaomi Mi5c can be expected to go official somewhere round the first week of December. Tipsters reveal that the smartphone may even go on sale on December 12. It is said to come in three color options namely Black, Rose Gold and Gold.

TechPP is supported by our audience. We may earn affiliate commissions from buying links on this site.
Read Next
With Redmi A1, is Xiaomi Resurrecting the Android One Dream, but Without Google?
#xiaomi #Xiaomi Mi5c