Going with Prime Minister’s vision for a cashless economy, the Government of India has now announced a new Aadhar based payments app that aims to take on the likes of Paytm and Airtel Money. Bharat Interface for Money, in short BHIM, is currently available for download only on Android. With that said, National Payments Corporation of India (NCPI) plans to launch a iOS version of the same soon.

The BHIM app can be regarded as a rebranded version of the Unified Payments Interface or UPI app that was launched by Narendra Modi earlier this year in August. The app aims to minimize the use of debits and credit card besides allowing people from rural areas make payments without the need of a smartphone or mobile data. With the app in place, users can make payments by simply using their Aadhar number, bank name, and fingerprint. To receive payments using the BHIM app, merchants would to install the app onto a smartphone and connect it to a biometric reader, which is currently available in the market for around Rs 2,000. With that said, it’s worth noting that the customer making payment using this method needs to have their bank accounts linked with their Aadhar card. Currently, around 40 crore Aadhar numbers across India is seeded with bank accounts, claims a government report. The aim is to link all Aadhar number with bank accounts by the end of March 2017. 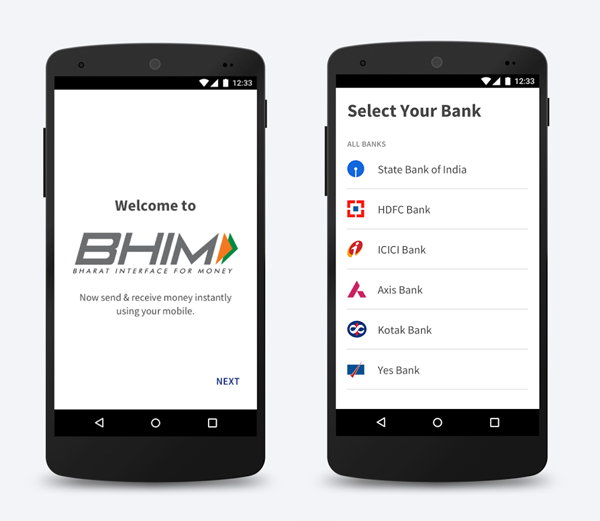 To start using the BHIM app all you need to do is to download the app and register by filling in relevant details like bank name, account number etc. Follow this by generating a UPI pin from the app. In order to do so, you would need to feed the app with the last 6 digits of your debit/credit card and a OTP will be sent to your registered number. Thereafter simply enter this OTP and set up your UPI pin. Apart from that the BHIM app won’t be charging users to making payments using the app, however your bank may deduct nominal charges for UPI transactions. The BHIM app works in a similar way like Paytm. To send money using this BHIM app, you would be required to enter the receiver’s mobile number or payment address or Aadhar number. Then type amount you want to send and your default bank account gets selected automatically. After that simply enter your UPI pin and proceed with the transaction. Alternatively, you can always opt for a paying by scanning the QR code of the merchant or the person you want to send the money to.

The BHIM app may not pose a big threat to Paytm but it indeed emphasizes on government’s commitment towards a near cashless economy. Besides, with this new payment system in place, the unified Aadhar number of Aadhar cards is finally being made to good use.

Download BHIM app for Android from the link here.

Was this article helpful?
YesNo
TechPP is supported by our audience. We may earn affiliate commissions from buying links on this site.
Read Next
What is UPI Lite and How to Enable it on Any Device [2023]
#BHIM #Download BHIM #Payment Portal #UPI