Wearables are plenty in the market but what they lack is product diversification, nearly all of the wearables are designed to do the same thing despite boasting of a small new feature here and there. Plume Labs has come with a new variable that tracks your environment instead of your fitness. The Flow tracker is something that will be immediately helpful to you especially if you reside in a city that is ‘high’ on pollution. 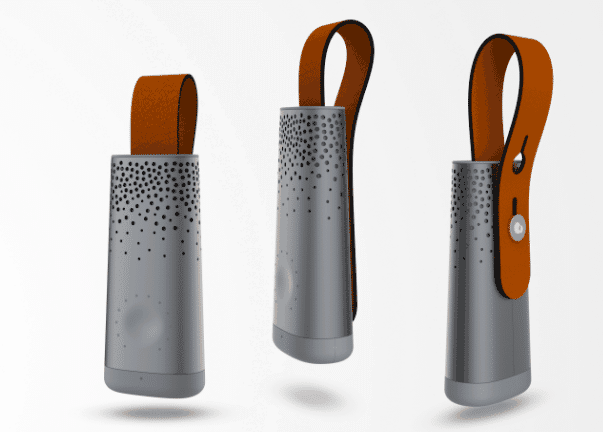 The device sports a touch button cordoned with a 12 color LED that will indicate the pollution status in the last 12 hours without actually having to rely on the companion app for the same. The flow tracker is designed to work both outdoors and indoors and will be able to detect particulate matter (PM2.5), nitrogen dioxide, ozone, volatile organic compounds (VOCs), temperature and also the humidity. Flow tracker comes with a leather strip and can be tagged along conveniently.

Similar to many fitness trackers Flow uses Bluetooth LE to communicate with the companion app and is supported by a community of Flow users. The community goes beyond the purpose of connecting Flow users and can act as a great data aggregator tool. Plume Labs also offers an API that gives users air quality forecasts based on the data collected previously and this also comes as an app for your smartphone. If you reside in places like Delhi, China or any of the other highly polluted city the Flow tracker is simply a no-brainer. It will help you decide on various factors including the most polluted areas and also let you decide on buying an Air Purifier.

It’s ingenious what Plume wants to do, it wants users to track the pollution in the areas they reside and share it with the community and this, in turn, will be the fodder for their statistics which will eventually help them make the air quality app better. Plume Labs is yet to disclose the price and availability but it’s most likely that the pre-orders may start this spring.

TechPP is supported by our audience. We may earn affiliate commissions from buying links on this site.
#CES 2017 #Plume Flow Tracker #Plume Labs