Facebook continues its trial for stealing Snapchat’s user base by bringing the “Stories” feature to its fourth platform, WhatsApp. As a “gift” to its billion-plus users on the messaging platform’s eighth anniversary, WhatsApp has redesigned the rusty old text status and has brought the ability to post ephemeral posts. The feature will begin to roll out for Android, iOS, and, surprisingly, Windows Phone as well starting from today. 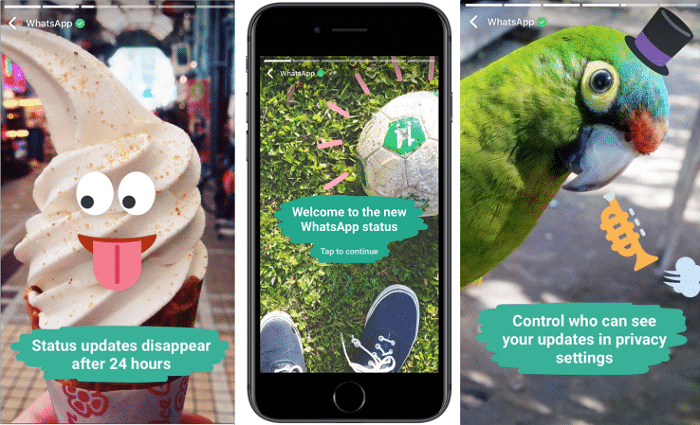 The concept of Stories on WhatsApp is entirely similar to what Facebook has been doing for the past year. You click a picture or record a video through the in-app camera, add text, stickers, drawings, and whatnot to it, and post. These so-called stories will disappear after a particular time frame (24 hours) and will be displayed in a dedicated tab on the WhatsApp application. These creations will be shared with all of the contacts you’ve selected with a persistent privacy setting, and subsequently, your friends can reply to them too. The new Status feature will replace WhatsApp’s old text format, which was actually the chatting app’s only feature when it launched almost exactly eight years ago.

The feature has been rumored to launch for quite a while and has been available to beta users with rooted phones for the past couple of months. Facebook had earlier brought such functionality to its main app, Messenger, and on the photo-sharing service, Instagram too. “Stories” had been a substantial hit on Instagram (150 Million people to be precise) and has reached Snapchat’s numbers recently. Snapchat should be certainly worried at this point as WhatsApp will be delivering “Stories” to regions where Snapchat can’t, and with Facebook adding this on each and every social platform it owns, users will probably ditch Snapchat sometime later.

Commenting further on the launch, Jan Koum, CEO & Co-Founder of WhatsApp, states, “We are excited to announce that, coinciding with WhatsApp’s 8th birthday on February 24, we are reinventing the status feature. Starting today, we are rolling out an update to status, allowing you to share images and videos with your friends and contacts on WhatsApp easily and securely. Yes, even your status updates are end-to-end encrypted.”

Apple's Live Text Uses AI to Let You Capture Text from…
How to Use Snap Camera [Snapchat equivalent for Desktop]
How to Share YouTube Video on Snapchat
Apple Translate: How to Translate Text and Speech on your…
Best Text to Speech Apps to Use in 2022 [Android/iOS]
Dictation on Mac: How to Use Voice-to-Text Typing