In line with our earlier exclusive report, Amazon has launched its Fire TV (2017) streaming device in India. The Amazon Fire TV Stick also comes baked in with support for a voice-control feature that also supports Hindi as a language. Unfortunately, the most awaited Alexa feature doesn’t come to the Indian Fire TV Stick variant just like how Siri is still not available for Apple TV in India. 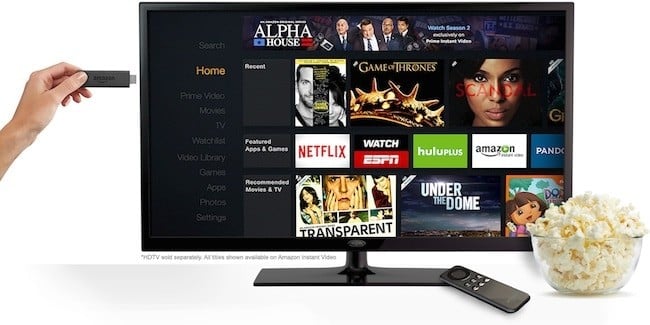 Amazon Fire TV Stick is a plug and play device similar to the Google Chromecast. The Fire TV is expected to leverage the recently launched Amazon Prime video service in India and eventually let you stream online content on any TV with HDMI port. With the advent of streaming services like Netflix, YouTube and Hotstar laced with the sharp increase in online content consumption India makes a lot of sense for Amazon Fire TV Stick.

Underneath the hood, the Amazon Fire TV Stick is powered by a 1.3GHz MediaTek quad-core processor accompanied with a Mali 450-MP4. This is coupled with 1GB RAM. The new Fire TV Stick comes with a voice-enabled remote for controlling various features of the stick. With that said, the Amazon Fire TV isn’t going to replace your current DTH TV. It is simply a media streaming device that would function just like a Chromecast or a Teewe. On the audio front, the Fire TV Stick offers Dolby Audio 5.1 surround sound and also supports an optional controller.

The Amazon Fire TV box with Voice control will allow you to access Amazon Prime, Netflix, Hotstar, YouTube, Saavn, gaana, Spuul and other streaming services, however, it’s worth noting that one of the India’s popular streaming service Hotstar is not supported as of now. The Amazon Fire TV Stick has been priced at Rs 3,999, however, if you are the Prime member you will get Rs 499 cashback in the form of Amazon Pay Balance. In case you have not subscribed to the Prime services you will be getting a one-year complimentary Amazon Prime service. As of now, the device will be available online from Amazon India and offline on select Croma and Reliance Digital stores.

Was this article helpful?
YesNo
TechPP is supported by our audience. We may earn affiliate commissions from buying links on this site.
Read Next
12 Best Audible Alternatives: Top Free or Cheap Audiobook Apps [2022]
#Amazon #Amazon Fire TV