…and its specs and price too!

The selfie cameras have triumphed. Or so some of the tech pundits and analysts would have us believe, quoting statistics that indicate an increased growth in devices that have front-facing cameras of a megapixel count of eight and above. Mind you, that definition of a selfie camera seems pretty lame when you consider the kind of shooters that the likes of Oppo, Gionee, and Vivo are launching. Indeed, 16 to 20 megapixels seem to be more like it in the case of these worthies. Not too long ago, Vivo launched the V5s as well as the matte black edition of the V5 Plus, both 20-megapixel toting selfie snappers, and now Oppo has come out with the F3, a self-titled Selfie Expert, with dual front facing cameras. 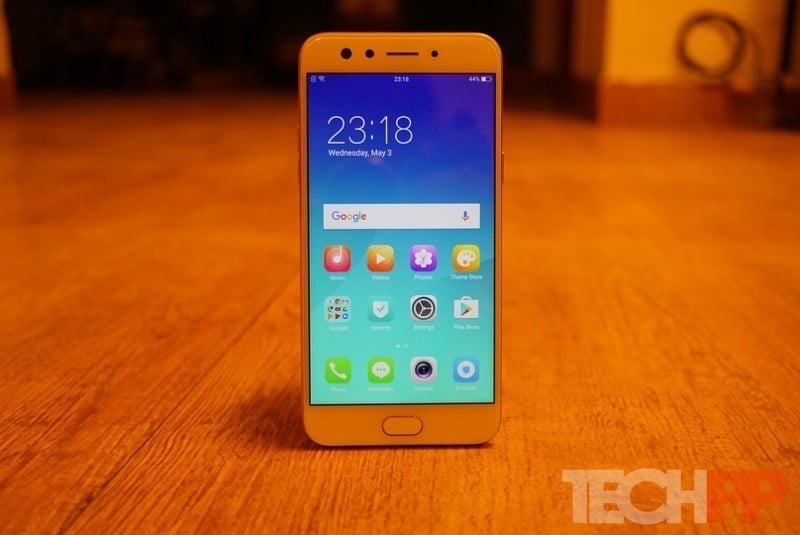 Oppo seems to have taken a sheet out of the Moto India launch manual, launching the Plus version of a device before its “normal” version. Which of course, opens the door to comparisons between the F3 and the previously launched F3 Plus. In visual terms, both seem cut from the same cloth, with a blend of glass and metal and curved edges, with changes being mainly in terms of size – the F3 Plus was pretty much a “large” phone with dimensions of 163.6 x 80.8 x 7.4 mm and tipped the scales at 182 grammes, while the F3 is a more compact 153.3 x 75.2 x 7.3 mm and is lighter at 153 grammes. The most obvious reason for this size difference is the display – the F3 Plus sports a 6.0-inch full HD display while the F3 has a more normal 5.5-inch one of the same resolution. The Selfie Expert proclamation here too is made by a dual front facing cameras – one a 16.0-megapixel one and another an 8.0-megapixel one. And both, by and large, have the same fingerprint sensor (below the display), micro USB port and audio jack (base) and button placement (power/display on right, volume rocker on left). The backs also look similar – plain metal with antenna bands, although the F3 Plus had slightly elaborate patterns on its antenna bands than the relatively plain shiny ones of the F3. 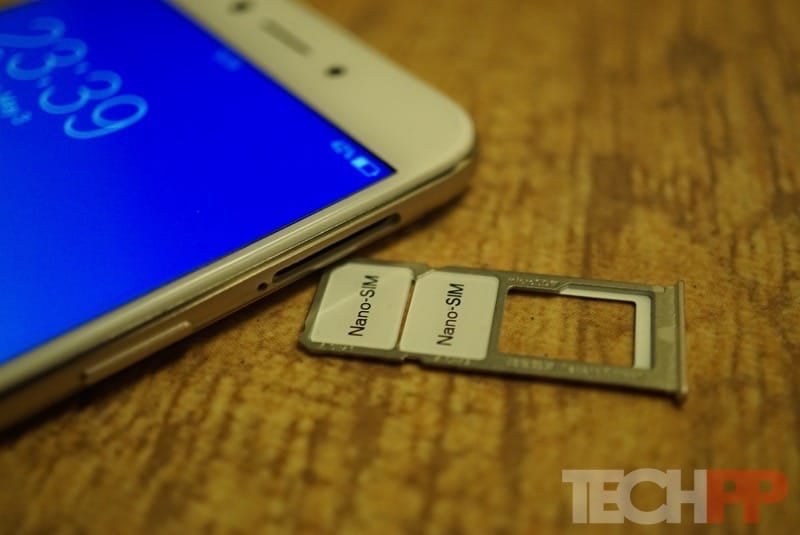 No, the changes are really in the innards. Perhaps the most striking is the fact that the F3 is powered by an octa-core MediaTek 6750 chip rather than a Qualcomm 653 (as seen in the Plus). And while the RAM and storage count of both devices is 4 GB and 64 GB, respectively, the F3 scores in having a dedicated micro SD card slot, unlike the hybrid SIM card slot on its larger counterpart. The Plus edition, however, scores in having a (predictably) bigger battery (4000 mAh) as compared to the 3200 mAh one on the F3, and also has a rear camera with a higher megapixel count (16 compared to the 13 on the F3). Both phones run Android Marshmallow with Oppo’s Color OS on top of it.

We found the F3 Plus to be handsome if slightly outsized phone (although compact and light for such a large display) and we think the F3 is a smart enough device in its own right. We have the gold edition of the phone and we think it is subtly classy – no, it will not scream for attention, but neither will it whisper “quick, hide me!” It will comfortably hold its own in most phones’ company.

How much for those selfie snappers? 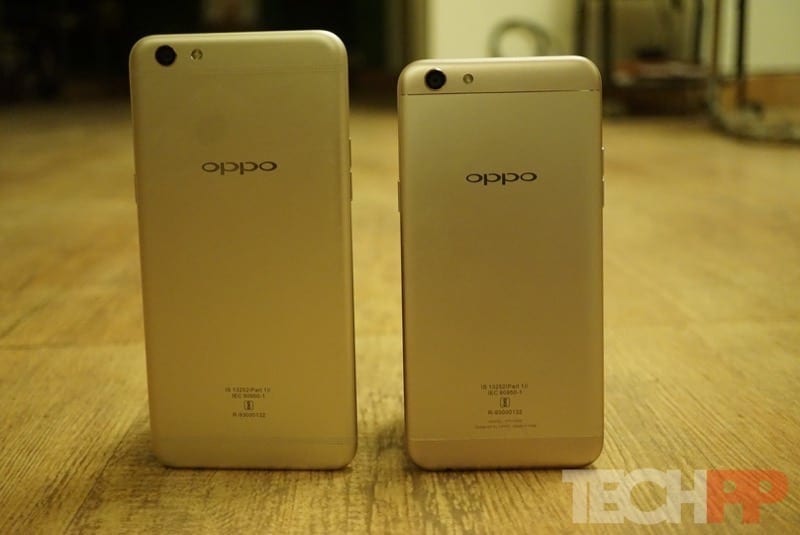 Some might consider the price of the F3 to be on the high side, given the existence of the Snapdragon 820 toting Lenovo Z2 Plus and the Xiaomi Mi 5. The fact, however, is that Oppo tends to slug it out more in the offline market than in the online one and there the F3’s most serious rivals are likely to the 16.0-megapixel selfie camera-toting Gionee A1 and the Vivo V5s, both of which cost lesser (although many noses will be turned up at the 720p HD display of the V5s, pretty much as it was on the V5, remember?). The F3 to its credit is the only one of the three to sport a dual selfie camera set up, but we think the A1 is a formidable competitor with its very good display and large 4010 mAh battery (check our review here) and high-profile ad campaign. There is also the little matter of Micromax’s return device, the Dual 5, which (allegations of being a rebranded Qiku aside) does deliver some serious photographic muscle through its dual rear cameras and also sports a decent front facing 13.0-megapixel snapper, apart from a Super AMOLED display. It is interesting to note how both Vivo and Oppo have kept significant price and spec differences between the Plus and “normal” variants of their selfie superstars – there is just no chance of a consumer being confused for choice between the two. The geek brigade is more likely to head for the Plus version, courtesy the better processor (Snapdragon enjoys significantly more goodwill than its MediaTek rival), but what if all someone seeks is powerful selfie cameras in a device that looks smart? Just how big is THAT audience? 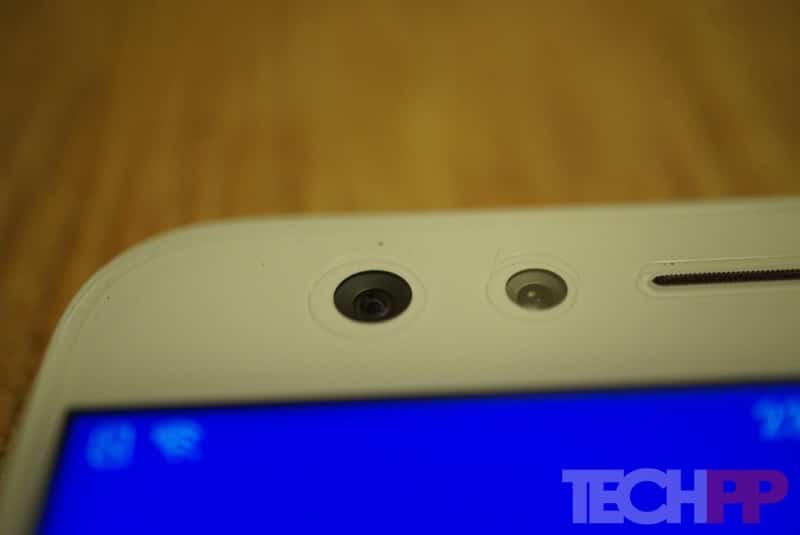 Which is why, in some ways, I think the Oppo F3 is yet another stone that has been tossed into the selfie pond. Just how big that pond is anybody’s guess – the tech pundits and analysts would have us believe that selfie phones are driving growth in the market, but then most of those worthies define a selfie phone (rather loosely, in my humble opinion) as anything with a front camera of 8.0-megapixels and above (hey, the Mi 4 had that TWO years ago). The F3 packs in much more in that department. In fact, like its larger predecessor, it is betting pretty much on selfies to carry it through. Whether the selfie cameras themselves merit that sort of faith will be revealed in our review, but as of now, we can say that the F3 has checked into the selfie hotel. The question is: is there room for yet another selfie phone out there? Even if calls itself an expert?