Amazon’s pursuit to replace the neighborhood grocery stores doesn’t seem to have stopped at the Dash button. The company has now unveiled a $20 device with a fridge magnet. The Dash Wand can be used to scan the barcode of items, and the same will be added to your Amazon Cart. The Dash Wand is available starting today for only $20, and moreover, it comes with a $20 gift certificate thus making it effectively free. 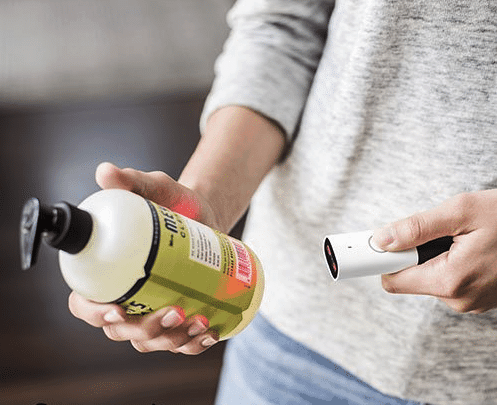 The Dash Wand joins the Echo Show, and the Echo Look Alexa devices that were released recently and the Dash Wand is shaped like a little remote control that fits snug in your palm. The device is equipped with a central trigger button surrounded by a LED ring. Apart from scanning barcodes, the Wand will let users access Alexa by just pressing the button and ordering the things. Furthermore, one can also use the Wand to access other Alexa skills including the one wherein you can call anyone with just voice commands.

A recent survey from Morning Consult says that the Alexa is the most popular intelligent assistant and it further remarks how the price is the number one criterion for buyers of just Amazon Alexa, Cortana and even Google’s Assistant. Amazon is very aggressively fostering its own ecosystem that would eventually help them to eye a monopoly across different categories including Grocery and Apparels. The Echo Look, for instance, helps buyers compare two dresses and it also gives them a sense of how the outfit looks Furthermore it also gauges your body changes and intelligently suggests dresses from Amazon.

In the meanwhile, Google is sharpening their knives and getting ready for the AI battle with the Google Home and the recent one to join the bandwagon is Apple with its new SIRI speaker.