Twitter always has been one of those services I’ve constantly failed to put down. Teeming with a widely disparate set of people and opinions, the social network has consistently managed to captivate me. However, it’s no secret the platform is losing numbers every day as critical issues continue to plague its environment. Twitter, as a result, has been adding a slew of features over the past year but unfortunately, those have nothing but overwhelmed the app with sections I find utterly useless. Fortunately, I’ve found a solution already, and no, it’s not another third-party client. 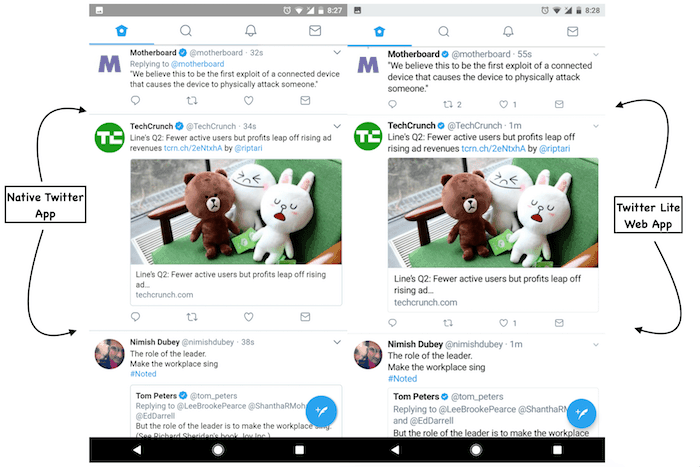 It’s Twitter Lite. Yes, the progressive web app Twitter launched a few months ago. A couple of days back, I accidentally ended up on the website and found myself quite satisfied with its feature set. Twitter must have made some significant changes recently as when I tried it after its original launch; the app lacked a sense of responsiveness I expect from a social networking platform. Nevertheless, as an experiment, I added Twitter Lite to my homescreen, enabled notifications for it and disabled the native Twitter app. All set.
[pullquote]Twitter Lite’s lack of ‘Night Mode’ is a blessing in disguise[/pullquote] Before I talk about what kind of benefits Twitter Lite brings to the table, let me first tell you why I am still using it. The reason is the fact that Twitter Lite lacks a night mode which might not seem like a positive trait at first glance but trust me, it is. My Twitter addiction becomes drastically more apparent during the night, and that’s when I employ the native app’s dark mode. Since Twitter Lite doesn’t come with that, I no longer scroll an endless list of tweets before going to bed. I know, I know, I can easily turn off that night mode switch and continue using the main app, but if history is any indication, I won’t be doing that. Hence, if you’re someone who suffers from a similar illness, I would advise switching to Twitter Lite as soon as possible.

The other most significant edge Twitter Lite has over its native counterparts is that it’s completely free of superfluous features the company has introduced in the recent times such as highlights in the notification tab. Fortunately, it doesn’t skimp on notification and keyword filters. Of course, then there are the more obvious advantages of using a web app. Twitter Lite only consumes a couple of MBs of storage compared to the hundreds the native app does. Especially if you’re on a phone that usually falls short of RAM, Twitter Lite is certainly a no-brainer.

Twitter Lite, unlike most other web apps, isn’t necessarily a stripped down version of the native app. It’s lighter, faster and devoid any sort of unnecessary bloat Twitter has added. If you are not aware of installing a web app, take a look at this guide on progressive web apps we posted earlier this year.

Was this article helpful?
YesNo
TechPP is supported by our audience. We may earn affiliate commissions from buying links on this site.
Read Next
With Football Manager 2023 Touch, Apple Arcade finally has its “killer ...
#Opinion #twitter #Twitter Lite #web apps