WhatsApp is one of the most popular messaging apps globally, and its subscriber base is rapidly increasing. When it comes to new features WhatsApp hasn’t exactly been the first one, for instance, WhatsApp was actually one of the last messaging apps to get the voice and video calling feature. However, the implementation of new features is something that’s laudable it’s astonishing how WhatsApp’s new Status feature, heavily inspired by Snapchat stories became a super hit. 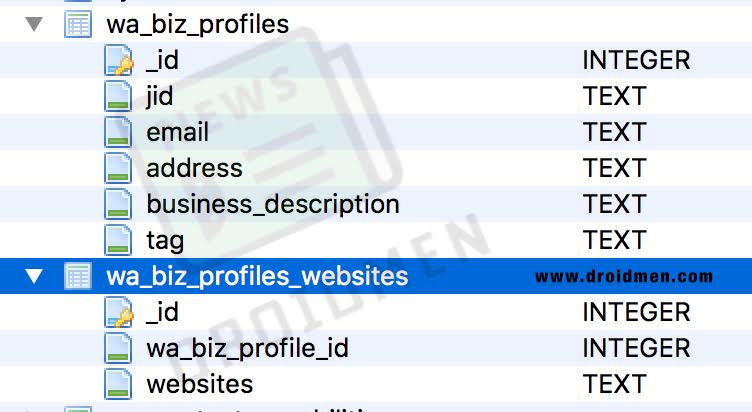 This time around, WhatsApp is testing the Business Profiles feature, and the same was found nestled among the database files. The rumor mills have been speculating an enterprise version of the WhatsApp by the second half of the year. Two tables in the WhatsApp Database hint at the business profiles being developed for the app. Both the tables consist of various components, and they are expected to be filled before the feature goes live.

The first table is titled ‘WA_BIZ_PROFILES’ and this particular table stores components like jid, email, address, business_description, tag. The second table is titled ‘WA_BIZ_PROFILES_WEBSITES’ and it is here that the users will be able to add their website details. Both the database tables have been apparently added in the version 2.17.299 and were extracted using the WhatsApp Key DB Extractor.

Simply put by adding business profiles WhatsApp is expected to generate more revenues. This doesn’t mean that the messaging app will bombard your screen with ads from the brand. The company seems to be more inclined in developing business platforms where consumers can directly converse with the business owners, something that scores of WhatsApp users are already doing in a simpler way.

It’s likely that WhatsApp may also introduce a new feature that would allow enterprise users to make use of the platform as a collaborative tool. If this happens, WhatsApp can leverage the user base they already have. In a nutshell, the WhatsApp Business will open a multitude of possibility and also revenue channels.

TechPP is supported by our audience. We may earn affiliate commissions from buying links on this site.
Read Next
How to Use WhatsApp on Chromebook [2023]
#WhatsApp #WhatsApp Business