Xiaomi will soon be updating its budget Redmi lineup of smartphones. Earlier today, the Xiaomi Redmi Note 5A Prime was spotted clearing FCC. Now, its smaller sibling, namely the Xiaomi Redmi 5A made an appearance on Chinese certification website, TENAA. 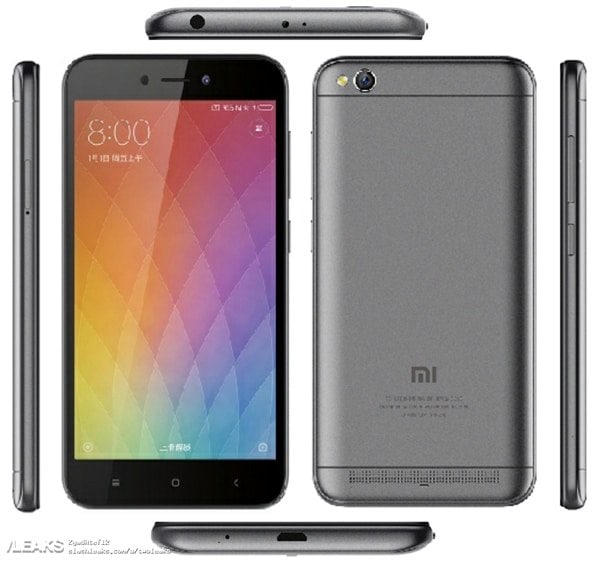 The Xiaomi Redmi 5A is an update to the company’s Redmi 4A which was launched in India earlier this year. The variant that was spotted on TENAA comes with a 5-inch HD (1,280 x 720p) display. It seems that Xiaomi has also made some modifications to the design of the budget device. The Redmi 5A appears to sport a metal unibody design with horizontal antenna bands. That said, it’s too early to take a call on the same by simply looking at the TENAA images. Often than not, smartphones OEMs give a metal like look over polycarbonate to its budget range of smartphone. The Meizu M6 is a living testament of the same.

Under the hood, the Xiaomi Redmi 5A is powered by a 1.4GHz octa-core processor. It’s safe to assume that the chip inside is none other than the Qualcomm Snapdragon 425. Additionally, the Redmi 5A comes in two variants. These include 2GB RAM/16GB storage and 3GB RAM/32GB storage. Talking of the cameras, the budget smartphone features an 8MP rear and 5MP front-facing shooter. The Xiaomi Redmi 5A is listed to come with a 3,000mAh battery. Sadly, it still rocks the old micro-USB port. Moreover, the smartphone also misses out on the Fingerprint sensor. It’s slightly unsettling to see Xiaomi sticking to Snapdragon 425 as Redmi 4A too came with the same processor, while battery capacity has gone down from 3120mAh to 3000mAh if this report is true.

The Xiaomi Redmi 5A comes in two color options, namely black and gold. It runs on Android Nougat 7.1.2 with MIUI 9 on top. Xiaomi is expected to price the smartphone highly competitively. It is expected to cost 599 Yuan and 699 Yuan for the 2GB RAM/16GB storage and 3GB RAM/32GB storage variant.

Was this article helpful?
YesNo
TechPP is supported by our audience. We may earn affiliate commissions from buying links on this site.
Read Next
With Redmi A1, is Xiaomi Resurrecting the Android One Dream, but Without Google?
#xiaomi #Xiaomi Redmi 5A