As promised, Reliance Jio today has revised all of its “Dhan Dhana Dhan” recharge plans. The new tariff cuts off a few days of validity from the existing ones and introduces two new entry-level plans. The current most preferred Rs 399 plan is now replaced with a Rs 459 one which offers 1GB of 4G data, unlimited calls and access to the operator’s suite of entertainment services. 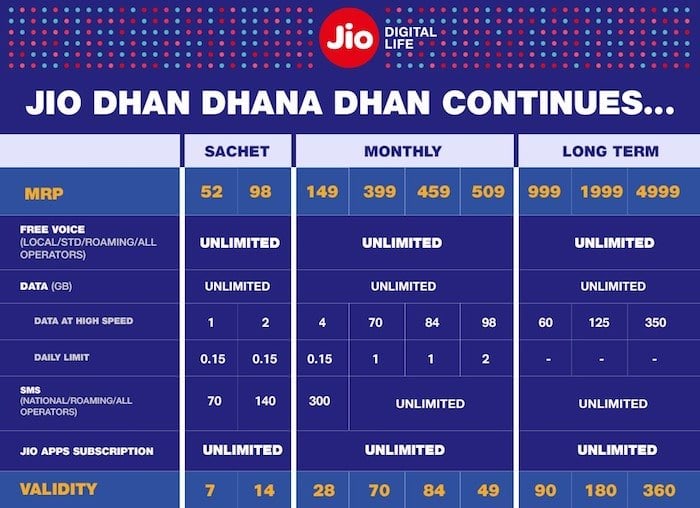 In addition to that, the Rs 149 plan has actually been improved and offers more data now. Before it was limited to 2GB per 28 days and now, it has a daily restraint of 0.15GB and 4.2GB in total. Below this price range, there are now only two plans you can look into instead of three. The Rs 98 one has a 0.15GB daily limit and 2.1GB for two weeks. The other one costs Rs 52 and has a similar daily constraint with 1.05GB total allowance for a week.

The Rs 9999 long-term plan has been scraped off as well. The remaining still exist, however. The validity period has been significantly reduced on the basic Rs 999 one, though. It now runs for only two months in contrast to three as before. On the contrary, the period for others has been increased. The clear goal here is to obviously to push the more expensive packages.

Another tidbit worth noting here is that post the high-speed allowance, the bandwidth will be cramped to 64Kbps instead of the more acceptable 128Kbps. That’s yet another instance of Jio arbitrarily changing the T&Cs.

The rest of the plans have largely remained unchanged with nominal reductions in benefits. You can view the embedded image for more details. The new revisions will be effective from today i.e. 19th October. You can still make use of the 100% cashback offer the company announced a few days ago.

Was this article helpful?
YesNo
TechPP is supported by our audience. We may earn affiliate commissions from buying links on this site.
Read Next
How to Buy JioPhone Next: Complete Guide and FAQ
#Diwali #Jio Plans #Reliance Jio