After it rained dual cameras in smartphones, we think now the tech world is heading towards a cyclone of edge to edge displays. The feature, just like dual cameras, first came with premium smartphones, but is now becoming mainstream. As a result, even budget smartphones are getting taller with each passing day. A few months ago, Micromax launched the Canvas Infinity, one of whose USPs was its 5.7-inch display with 18:9 aspect ratio, at a price that was surprisingly in four figures (inspiring our mentor to compare it to the Joker). Now, the company has launched an improved version of the device called the Canvas Infinity Pro which comes with similar USPs, focusing on a nearly bezel-less display and cameras. But is the device edgy enough to survive the tough competition? Here are our first impressions. 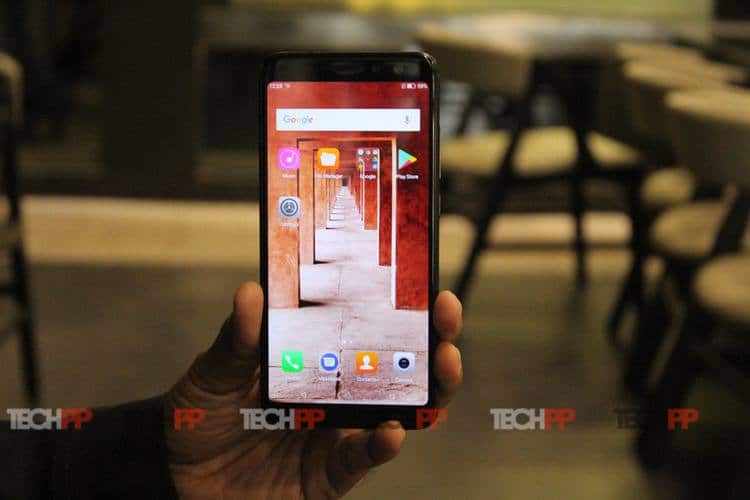 Familiar design, but reminding us of good things

The first thing which anyone notices about a smartphone is generally its display and with some of its bezels beings shaved off, the display of the Canvas Infinity Pro definitely screams for attention. The smartphone comes with 5.7-inch “almost” bezel-less HD display with a resolution of 720 x 1440 pixels topped by a 2.5D curved glass. The smartphone comes with an 18:9 aspect ratio display but it does have well pronounced, if not very large, bezels around it. These bezels are not as prominent as we have seen in some other devices but they are not particularly invisible either. The area above the display carries the dual front-facing cameras with LED flash, the proximity sensor, and the earpiece, while the one below the display is plain – the navigation buttons are placed on the screen, as is becoming increasingly the rule in 18:9 aspect display phones. The device measures 152.3 x 72.8 x 8.3 mm – the phone is a little large to be handled with one hand but is not uncomfortably so.

Turning the smartphone over, the Infinity Pro looks familiar, like a cross between the Moto G5s Plus and the Lenovo K8 Note. Which is not a bad thing, as this kid has definitely inherited their good looks. The back has two dark grey antennas, one near the top and another near the base. Both the antennas curve around the edges. Just below the first antenna, the company has placed the primary camera with LED flash in a capsule-shaped unit which protrudes from the back. The camera capsule, at first glance, looks like it sports two cameras, but a closer look clears the horizon and the sensor gets separated from the LED flash. A little down south from that is the recessed circular fingerprint sensor. 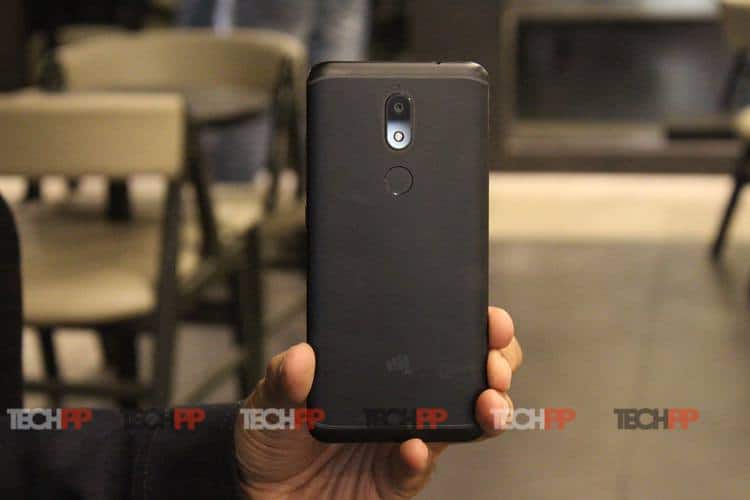 There is a very subtle grey Micromax logo above the second antenna band. The back also curves on the edges, and has a matte finish, giving it a very firm grip and making it comfortable to hold. The left side of the smartphone carries the dual SIM card slot, as well as a dedicated slot for a microSD card. On the other side are the volume rocker and the power/lock button. This button is slightly textured which makes it easier to identify (a hint of Moto, perhaps?). The base of the Canvas Infinity Pro carries the speaker grille, the mic, and the micro USB 2.0 port while the top carries the 3.5 mm audio jack.

In terms of sheer looks and design, we think Micromax has done well with the Canvas Infinity Pro. The device has got the display dominated front with relatively thin bezels and the back adds to the glory of the front. That said, the metal on the back picks up smudges quite easily. They might not be too loud like they would be on a glass back but are visible. But all said and done, the Canvas Infinity Pro punches above its weight when it comes to looks.

A spec bump up but nothing…infinitely great!

As mentioned earlier, the Micromax Canvas Infinity Pro features a 5.7-inch HD+ display with a resolution of 720 x 1440 pixels and 18:9 aspect ratio, which is the same as it was in its predecessor. The smartphone is powered by Qualcomm Snapdragon 430 processor (up from the 425 on the Infinity) paired with 4 GB RAM and 64 GB internal storage (again up from the 3 GB/ 32 GB combo on its predecessor). Users can expand the storage on the device up to 128 GB via MicroSD card. 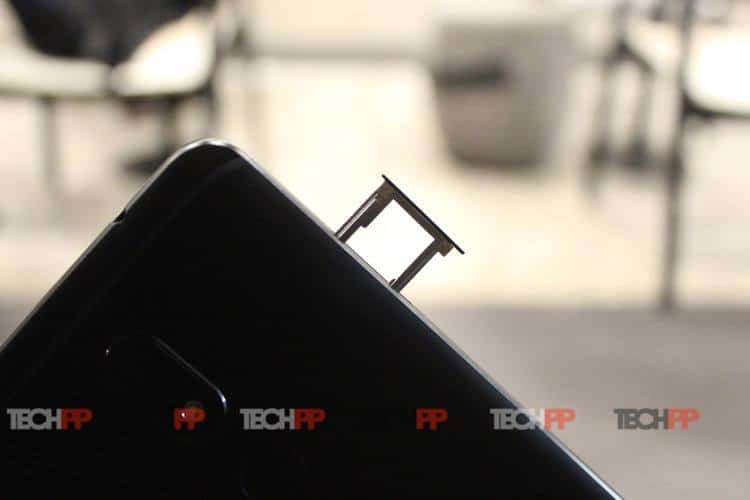 In the camera department too, there has been a bump in numbers – the rear camera is 16 megapixels, up from 13. But if you are missing a dual camera set up, fear not, the Canvas Infinity Pro comes with a dual camera setup on the front. It has 20-megapixel and an 8-megapixel sensor for selfies and video calls with features modes like Portrait mode, Beauty mode, Panorama and even Time Lapse. The device runs on Android Nougat 7.1 but comes with a software skin on top – we did expect Oreo, but hopefully, that is an update away. It features a 3000 mAh battery (which is slightly – ever so slightly – more than the 3000 mAh one on the Canvas Infinity). The connectivity options on the device include 4G VOLTE, Wi-Fi, Bluetooth and FM radio. 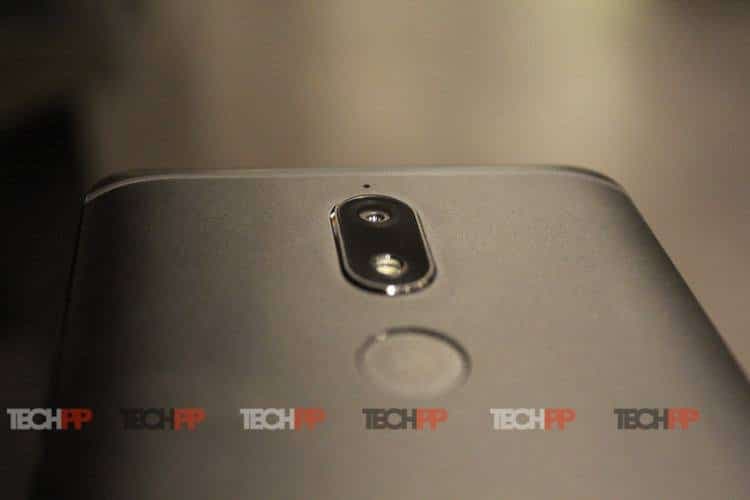 The Micromax Canvas Infinity Pro is priced at Rs. 13,999 and comes with some interesting features, most of which are bang in front of the device – that display and those dual cameras. But while an 18:9 display is laudable, it is let down by the fact that it is not even full HD which is pretty much hygiene now in budget smartphones at its price range – it is not as compelling a feature at this price as it was at Rs 9,999. The phone comes with mostly middling specs but has a dual camera set up on the front that comes with pretty impressive sensors, at least in terms of numbers.

That said, this segment of the market is pretty competitive in terms of features and pricing. The Canvas Infinity Pro faces tough competition from devices like Honor 7X which comes with dual primary cameras, comparative specs, and a full HD 18:9 screen, as well as a much more premium design. There are also the Lenovo K8 Note and the Xiaomi Mi A1 both of which might not have the edge to edge display but do have some impressive specs and not to forget, very good dual primary cameras. There are also devices like LG Q6, Moto G5s and the good old bestseller, the Redmi Note 4 which can give the Canvas Infinity Pro a run for its money. Will the Canvas Infinity Pro spaceship travel to infinity and beyond or is it going to crash right after the blast-off? Read our detailed review to find out. Stay tuned.

Was this article helpful?
YesNo
TechPP is supported by our audience. We may earn affiliate commissions from buying links on this site.
Read Next
Poco F3 GT: Made of Mad-deningly Good Design
#First Cut #First Impressions #hands on #micromax #MIcromax Canvas Infinity Pro