The kit is already being employed by a slew of major companies such as Bose, Jabra, Beyerdynamic, Linkplay, Wilkins and more. Amazon also said Bose, in particular, had been working with the company to test and improve the interface for better compatibility. It will be widely available to third-party developers starting from this summer. Bose, not long ago, unveiled the second-generation of its QuietComfort 35 wireless headphones which comes with a dedicated key for invoking the Google Assistant. Hence, it’s safe to assume that the company will be soon releasing a similar product, this time with Amazon’s Alexa.

The toolkit essentially brings a lightweight solution for gadgets which lack ample processing power. As a result, the module functions by sending voice requests to the Alexa app installed on your iPhone or Android phone instead of living directly on the device. Hence, it will come down to how effortless the process will be for the user as the requests can become a bit time consuming especially in low connectivity areas. However, because of this, manufacturers won’t have to make a whole lot of changes on their devices as the kit merely requires them to exchange pieces of audio which, in most cases, they already do.

“Bose is excited to add a remarkable new Alexa experience for our customers. Accessing Alexa’s music, information, and a vast number of skills on our headphones will become easier than ever, and we’re looking forward to bringing our collaboration to life.”, said Brian Maguire, Director of Product Management at Bose, said in a statement. 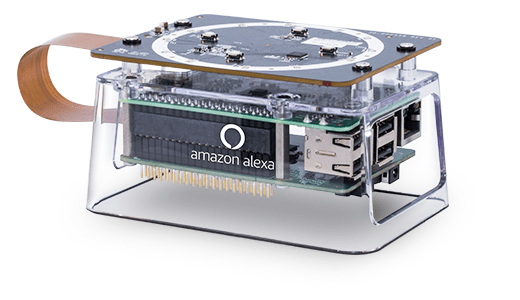 In addition to the Mobile Accessory Kit, Amazon also announced an upgrade to its far-field voice technology with a new development kit called “Amazon Alexa Premium Voice”. The module will allow device makers to offer richer and high-quality voice experiences in their products. To achieve this, it includes support for either 7-mic circular or 8- mic rectangular array boards and comes with a native integration of Amazon’s proprietary algorithm for “Alexa” wake word recognition, noise reduction, beam forming, and acoustic echo cancellation.

The Mobile Accessory Kit marks a significant step forward in Amazon’s quest to put Alexa into every corner of your environment. Considering its reign in the smart home market, it won’t be a strenuous task for third-party manufacturers to promote their upcoming Alexa-powered wearable devices. Amazon has, as of late, brought Alexa to a bunch of smartphones as well through exclusive partnerships.

The move will also substantially impact Google’s “Made for Google” program that involves devices such as headphones that are designed to work with Google Assistant. The search engine giant is already facing stiff competition from Alexa in the smart home space and the arrival of these new kits won’t make situations any better.

Was this article helpful?
YesNo
TechPP is supported by our audience. We may earn affiliate commissions from buying links on this site.
Read Next
12 Best Audible Alternatives: Top Free or Cheap Audiobook Apps [2022]
#Alexa #Amazon #Devices #wearable