Replying to every single message you receive can be a bit of a hassle. So why not let machine learning take care of it for you? Google has similar thinking, and for the past year, it has been adding “Smart Replies” to its messaging and email services.

“Smart Replies” essentially let an app suggest a bunch of quick responses whenever a message arrives eliminating the need for you to manually type them. For instance, if someone sends you “Dinner at 8?”, it will recommend replies such as “Sure”, “Yeah” in the notification panel itself. You can then just tap the bubble, and that’s it. 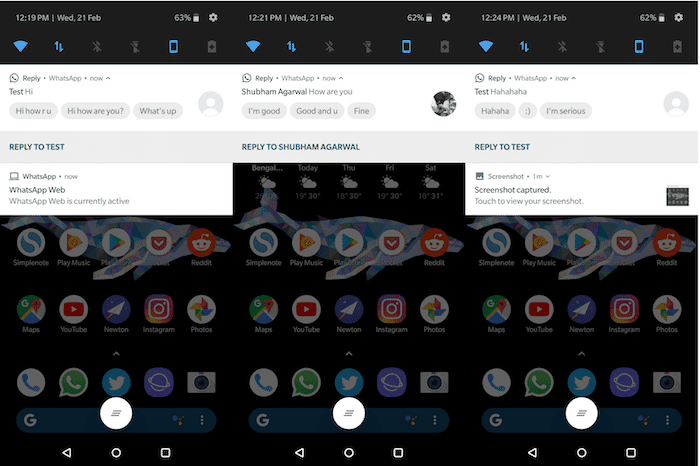 Sadly, though, the feature has remained limited to Google’s own applications and unless you’re one of THOSE people who employ any of the company’s half a dozen messaging apps, chances are you’ve never truly realized how convenient “Smart Replies” can be. Fortunately, that’s about to change as Google’s Area 120 team is gearing up to bring the feature to third-party messaging clients like WhatsApp, Twitter Direct Messages, and more. While the company is yet to officially make the app — called Reply — available for everyone, you can grab the leaked APK file and have it up and running in a matter of seconds. Here’s how to get started. 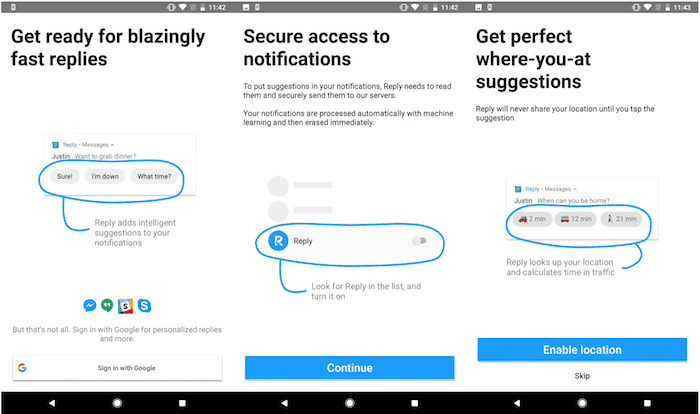 Now, whenever you receive a message through any of the compatible apps, Reply will add a handful of smart replies besides the notification or beneath them if you expand it. For enabling time estimates, you will have to configure your home and work addresses in the app. The option can be found in the left navigation drawer. To turn Reply off for any particular app, open up the app, swipe right from the left edge for pulling out the drawer and head into “Apps”. 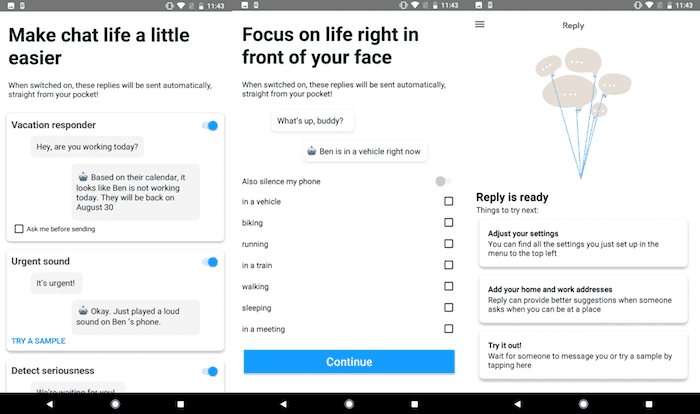 As I mentioned earlier, the app can also send automatic replies if you’re busy. The settings for those features are located in the same navigation drawer. The suggestions, in the majority of cases, are quite accurate. But the app is still learning and can be a little off especially if the message is long or phrased oddly. Its forte lies in conversations that involve replying with quick texts like “Okay”, “Sure”. I’m also glad to report that, though, it is compatible with emojis. 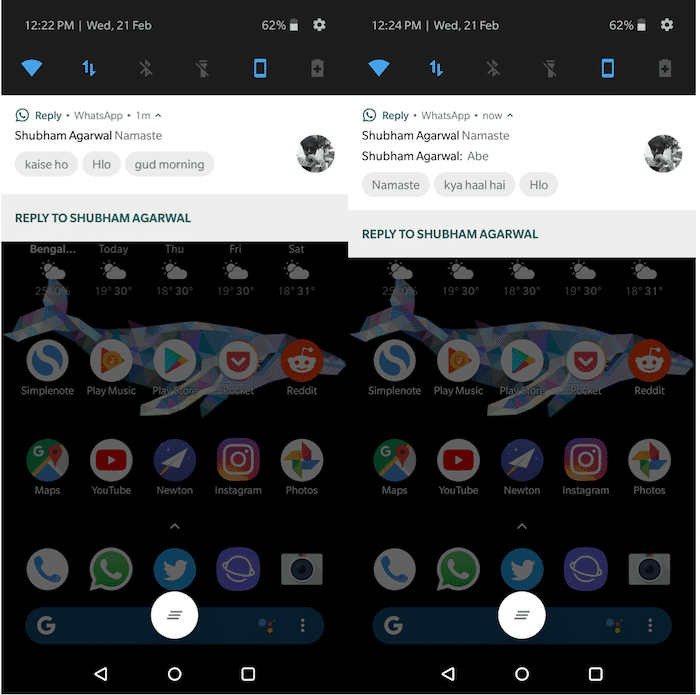 Surprisingly, it worked with Hinglish messages as well which kinda makes sense since Google has already support for it on Allo and Assistant. Another interesting tidbit I noticed was that, at times, Reply suggested “gud morning” instead of “good morning” which could mean Google is feeding data to it from its other ventures. I guess that’s one price to pay for Machine Learning.

Reply, however, is still in its alpha stages, so you’ll have to deal with a few pesky bugs and limitations. To begin with, notifications from apps like WhatsApp don’t go away if you read them on directly on the app instead of tapping the alert. That’s probably because Reply seems to be channeling the notifications through its own interface. Moreover, it only functions with the last message. Unlike Android’s native feature, you can not attend each of them individually. It also doesn’t support a whole lot of messaging apps for now. I was able to use it with WhatsApp, Hangouts, and Direct Messages from Twitter.

Reply is still an excellent utility, and I’m certainly looking forward to when it becomes more widely available and compatible with more apps. There’s also a possibility that it might soon natively get integrated with Android, perhaps we’ll know more about that in May during the company’s annual developer conference. Until then, have fun messing with Reply and wave goodbye to typing mundane texts like “Ok”.

Was this article helpful?
YesNo
TechPP is supported by our audience. We may earn affiliate commissions from buying links on this site.
Read Next
How to Check and Recover Clipboard History on Android
#android #how to guide #Messaging #Reply #Smart Replies 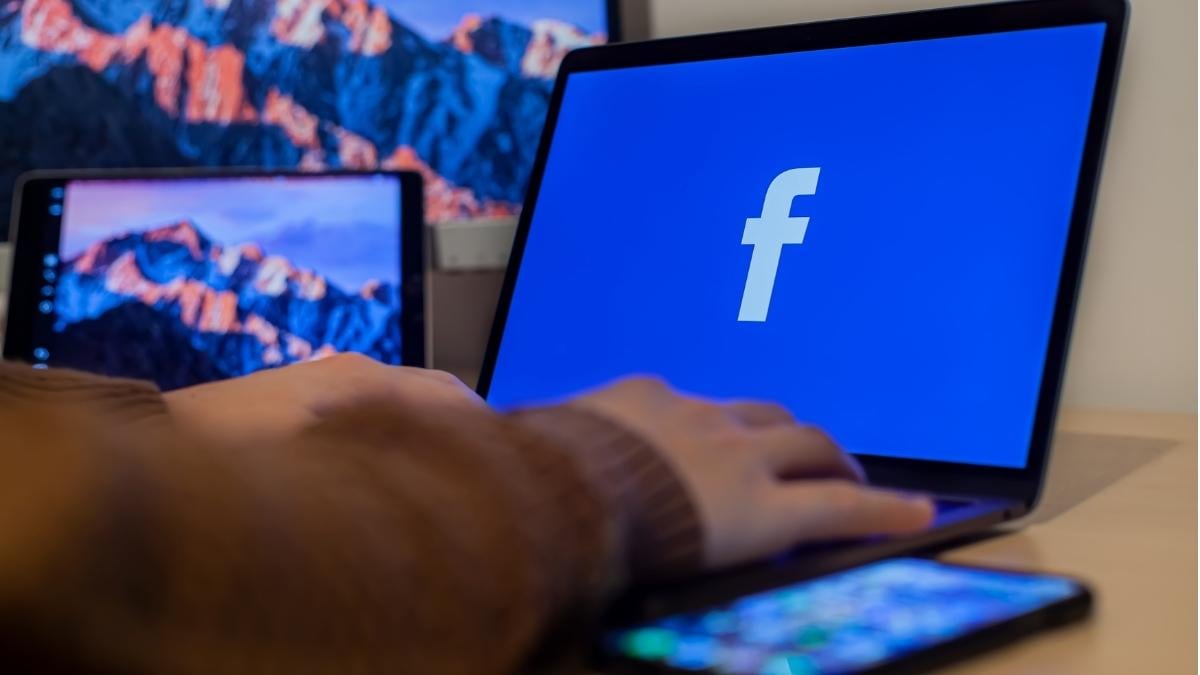