Last year, Google had added the ability to transfer money to Android Messages through Google Wallet. A recent apk teardown had also indicated new incoming features for the Google Contacts app, and this seems to have arrived, at least for a user in Canada. 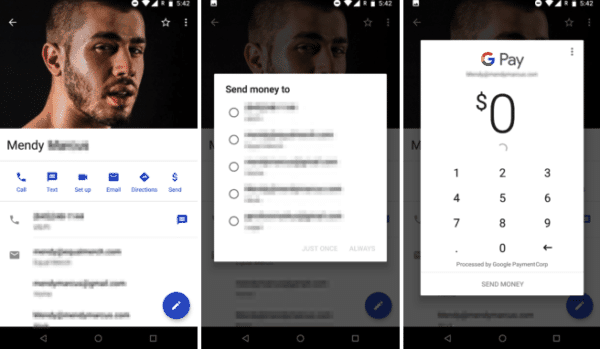 Android Police has reported that one of their readers is now able to see a new “Send” icon on the Google Contacts. In all likelihood, this new feature was enabled via server-side switch while the UI is similar to the one on the Android Messages. Users can also choose the contact method to send the money. That being said the “Request Money” option seems to be absent as of now, but the same was observed earlier in an apk teardown.

It is quite possible that Google is testing out the new feature via server-side switches and the feature in itself is not fully functional. For instance, the ‘Request for money’ is yet to be added. Interestingly, the reader who has access to this function is running Contacts v2.5 on Nexus 6P, and since he is in Canada, the pay feature is not working completely. All said and done this is a nifty little feature for Google Pay users.

Android Pay app was recently treated to a rebranding and was introduced as Google Pay for Android. In India Google launched Tez, a payment app that would go at loggerheads with other solutions like PayTM. At the end of the day Google, like other companies, Google is bullish about making a place in an ever-expanding mobile payment ecosystem. The other players include Samsung Pay and Android Pay. The development of mobile solutions aligns with the growth in the number of mobile payment users worldwide. The total number of mobile payment users is said to have reached an estimated 450 million users in 2017 and is likely to maintain a similar growth trajectory in the coming years.

Was this article helpful?
YesNo
TechPP is supported by our audience. We may earn affiliate commissions from buying links on this site.
Read Next
How to Use Android Phone as Webcam for PC
#android #Google Contacts #Google Pay #Google Tez #Mobile Payments