Ad wars are not new to the world of technology. We have had companies poking fun at each other for years now, trying to embarrass each other, in order to not just grab more eyeballs but to also convert their rival’s customers into their own. And one of the most famous ad rivalries in the world of tech is that between Apple and Samsung. Over the years, the two companies have become the top companies in the world of mobile technology, so competition is expected. However, while the Cupertino giant’s digs at its rival have generally tended to be understated (often taking a poke at Android, rather than a brand in particular), the South Korean company has often erred on the savage side and been more direct. Samsung has now again tried to mock its arch-enemy, but this time has made a rather odd area to attack it in – an almost four-year-old device!

“Throttled” by the iPhone 6!

“Moving on”, a one-minute ad starts with a woman walking up to a security check with her iPhone 6 (yes, you read it right!) in her hand to show the boarding pass to the security person. Just when she opens the Wallet app, her iPhone goes blank and takes a few seconds to load the boarding pass, holding her up, and getting her a frustrated look from the security personnel. The person next in line, with what seems a Galaxy S9, scans her ID and passes through swiftly.

As our protagonist then proceeds towards her plane, she gets a message on her phone from her mom saying, “Did you upgrade from that iPhone 6 yet?” 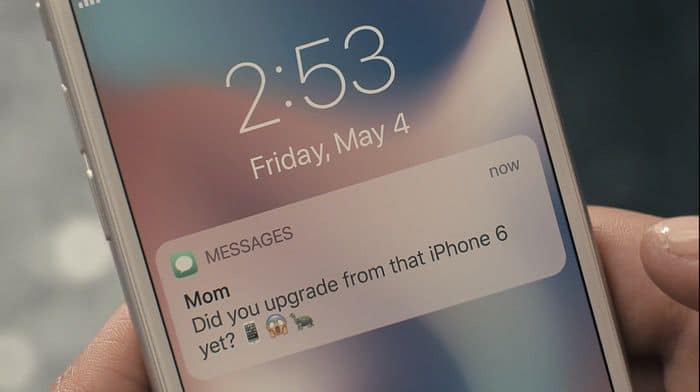 After getting on the plane, she tries to open the TV app on her iPhone which again takes a few seconds to launch while the gentleman sitting next to her enjoys a movie without any problem on a Galaxy S9. And as she gets out of the airport to get in her Uber, her ride gets all mixed up because her iPhone 6 is slow. Adding to her misery is the pouring rain outside.

Frustrated and irritated, our tortured protagonist, spots an Apple Store on the way, asks the Über driver to stop the cab and walks in. There she asks an Apple employee if they can fix the phone tonight as it is really slow, to which he tells her that she can switch the performance management option off, but that might cause the phone to shut down abruptly, thus highlighting the battery throttling issue. Or she can just upgrade her iPhone. 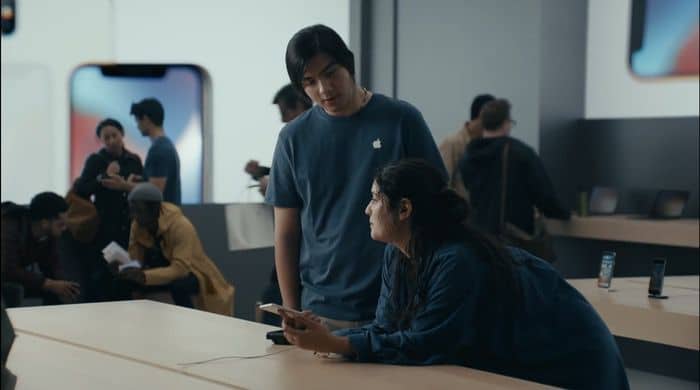 Walking out of the store, our iPhone 6 user exchanges looks with the guy with the Notch haircut. Yes, the same guy that was there in the Samsung’s “Growing up ad” but this time he also had a kid with the same haircut – such a cult, eh? All this leads the protagonist to buy a Samsung Galaxy S9. She then texts her mom saying “Got that upgrade!” Along with three bolt emojis. The ad ends with the company’s logo. The ad has “ am moving on” by Chyvonne Scott playing in the background.

Would you compare the speed of an almost four-year-old computer or any other consumer tech product with one that has just arrived in the market? Well, most people might consider it to be more than a little ridiculous (given the speed at which technology changes these days) but Samsung clearly does not. The company has not just compared an iPhone 6 (a 2014 product) with the Galaxy S9 launched in 2018 but has created an entire, elaborate ad around it.

And we cannot help but ask: WHY?? 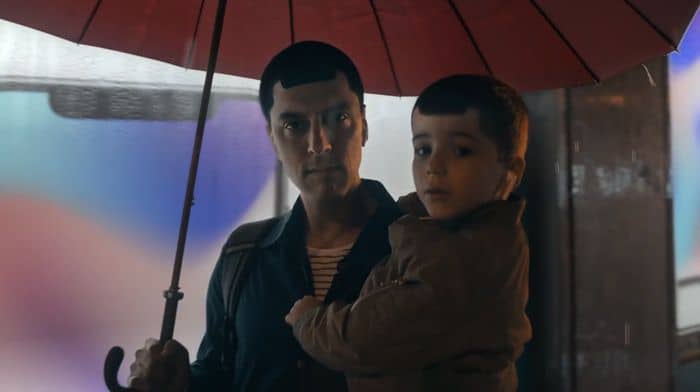 Yes, the ad is sleek and has good production values and a narrative. But our problem is with the very foundation on which it rests. It is not as if Apple has not launched a phone which can go head to head with the Samsung Galaxy S9 or has stopped manufacturing smartphones after the iPhone 6. There is an iPhone X around which is actually the one phone as per most sales figures. Logically, Samsung should be pointing all its guns at it. And even if the company did not want to go all in by comparing the Galaxy S9 with the iPhone X, we think it would have still made more sense to compare it either with an iPhone 8 Plus or 8. Instead, the company targeted the iPhone 6!

And the problems in the ad do not end here. The new Galaxy S9 ad also highlights the battery throttling issue that came up late last year. And although we think, highlighting this issue had the potential to push the Apple ship into rough seas, Samsung was just a little late in making its point – Apple did take a lot of flak over the issue, but the uproar has since died down. Interestingly, even when this issue actually comes up in the ad, the “Apple employee” does not even mention the battery replacement option which can fix the problem faced by our protagonist – it would be way lighter on her pocket as opposed to buying a new Samsung Galaxy S9.

Samsung has instead chosen to go with the “oh I am so frustrated and helpless because my phone is so slow” approach while chasing the tail of a 2014 device. Imagine Apple comparing the iPhone X with Galaxy S5 and saying “oh, look we are way ahead of Samsung in the game because our new device is better than the one they made in 2014!”

What’s more, Samsung has spent so much time highlighting what is wrong with the iPhone 6 that it has completely forgotten to highlight any significant USP of its own smartphone in the process. The Galaxy S9 in the ad is shown to function but in no special manner – the stress is more on the lack of speed of the iPhone 6 than of the speed of the S9. 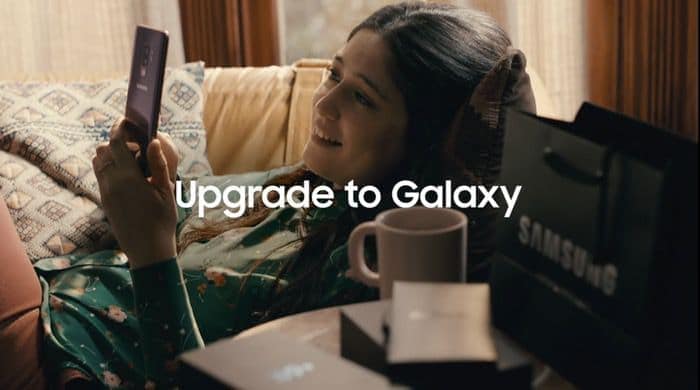 Everyone loves a good competitive ad that pokes fun at a rival, but the new Samsung Galaxy S9 ad feels a little spiteful and very out of place. The ad revolves around Apple so much so that after a while you forget that it is an ad for Samsung and only remember that it is an ad against Apple – a little desperate for a company that has created some very solid and extremely creative ads in the past. As per the ad, people frustrated with their old iPhone 6
(that are not even commercially available now in some markets) can “move on” to a Galaxy S9. Honestly, we think, it is Samsung who needs to do a bit of moving on, because it seems still stuck in 2014. Come on Samsung, it is 2018, and you have got newer devices to talk about. And some of them are even your own. Give them your attention – they deserve it more than a sluggish iPhone 6. Really!

Was this article helpful?
YesNo
TechPP is supported by our audience. We may earn affiliate commissions from buying links on this site.
Read Next
Best Places to Buy Refurbished MacBook or Mac [2023]
#Ad Review #apple #iPhone 6 #samsung #Samsung Galaxy S8 #Tech Ad-ons