Xiaomi Redmi Y2 vs RealMe 1 vs Redmi Note 5: How do They Compare?

Xiaomi has today upgraded its line of phones designed primarily for people who prefer a beefed up selfie camera over everything else with the launch of the Redmi Y2. However, you’ve probably noticed that there is already a shedload of phones available in the same price range the Y2 lives including Xiaomi’s own Redmi Note 5. Therefore, in this article, we find out if the Redmi Y2 has enough brawn, on paper, to take on the best of its contenders which includes Oppo’s RealMe 1 and Xiaomi’s own Redmi Note 5.

The new Xiaomi Redmi Y2 comes with a rather surprising polycarbonate build with brushed metallic finish that we used to see long back. In comparison, the Redmi Note 5 comes with an aluminum body and metal frame with small pieces of plastic on top and bottom near the antennas. However, the RealMe 1 manages to dramatically stand out here with its unique rear which might seem like glass but is made out of plastic and a polymer composite material. So yeah, the Realme 1 is the most unique, while Redmi Note 5 has a sturdier build and finally, the Redmi Y2’s polycarbonate body ends up looking like a compromise.

The displays on the Redmi Note 5 and the Realme 1 are pretty identical — a 5.99-inch (6.0-inch on the RealMe 1) FHD+ LCD screen with an aspect ratio of 18:9. But the Redmi Y2 carries a lower resolution 5.99-inch HD+ screen (with 18:9 aspect ratio). There is no mention of protection on the Redmi Y2 display, while the other two phones do come with Corning Gorilla Glass.

While the Redmi Note 5 and the Redmi Y2 are powered by Xiaomi’s favorite Snapdragon 625 chipset, the RealMe 1 comes with a significantly more powerful Helio P60 processor. There are 3GB RAM / 32GB memory variants available for all of them but the RealMe 1’s highest-end option carries 6GB RAM, 128GB storage, whereas the Redmi Note 5 and Redmi Y2’s most expensive flavor has 4GB RAM, 64GB storage. 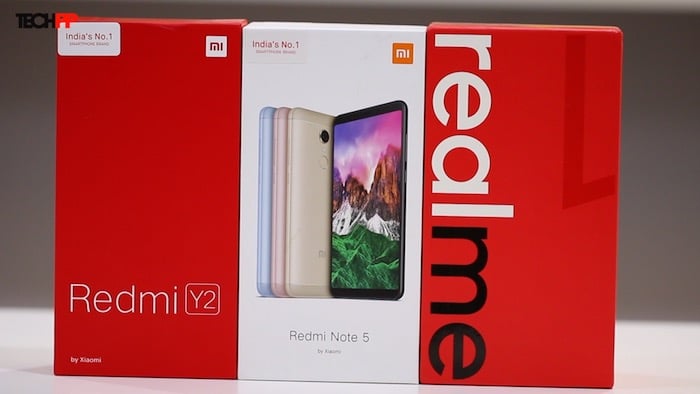 The software, as you’d expect, is a similar story between the Redmi Y2 and the Redmi Note 5 — MIUI 9.5. Although it’s worth noting that the former is running on Android 8.1, while the latter comes preloaded with Android 7.1.2. The RealMe 1 also has Android 8.1 but the custom skin is Oppo’s ColorOS 5.0 instead of MIUI. An important thing to note here is that both Redmi Y2 and Realme 1 lack support for the WiFi 5GHz band, while the Redmi Note 5 comes with dual-band WiFi support.

In this trio, the Redmi Y2 is the only one with two camera sensors on the rear — a primary 12-megapixel lens and another 5-megapixel for depth-sensing and most certainly, that is its unique selling point as you must have seen looking at the other points above. Its front camera also has the highest resolution — a 16-megapixel snapper which is even assisted by a soft LED flash. The Xiaomi Redmi Note 5, on the contrary, lacks the secondary 5-megapixel camera on the rear and the selfie camera too is a meager 5MP one. The RealMe 1, lastly, features a 13-megapixel lens on the back and an 8-megapixel one on the front.

So that’s it for this quick comparison between the Redmi Y2, the Redmi Note 5 and the Realme 1. Let us know if you have any specific question about the same in the comments section below.