After endorsing Gionee with the “Selfiestan” campaign, Alia Bhatt has now moved on to another smartphone brand. The Bollywood actress has recently been appointed as the brand ambassador of Nokia. And with Diwali approaching, the company has released an ad featuring her for the occasion. But is it a cracker (pun intended)?

Forty seconds of Alia Bhatt…and a bit of Nokia

“This Diwali do what only you can do” is a 40-second ad which features a Nokia phone in the hands of Alia Bhatt in different situations. It begins with Alia being a part of a Diwali gathering. She first takes a panorama shot with the Nokia phone of her family enjoying the occasion. Then she moves on and takes a portrait image of one of her friends. After this, Bhatt captures a funny GIF of one her guests at the gathering. And lastly takes a selfie with her mother, who is feeling lonely. In the background of all this is Bhatt’s monologue, which is in Hindi, and basically describes the pictures she is taking and what role they will play in her life (there is a WhatsApp reference). The spot ends with Bhatt holding up a Nokia phone and saying, “Do what only you can do. Only with Nokia.” This is followed by an array of Nokia phones on the screen and the company’s logo with Nokia’s iconic ringtone. The ad has peppy background music all throughout.

When it comes to advertising, we have had our reservations about celebrity endorsements. While a few celebrity endorsement ads like those by Vivo featuring Aamir Khan manage to still highlight the product, the vast majority of these often fall prey to the celebrity’s aura, resulting in attention generally revolving around the celebrity, and doing very little for the product. Unfortunately, that is what has happened here.

The problem is, “This Diwali do what only you can do”, features Alia Bhatt first and Nokia second, which means the brand along with its smartphone comfortably take the back seat while Bhatt controls the steering wheel of this ad-wagon. While the Nokia phones are supposed to be the heroes of the ad, it is Alia who stays in the spotlight. The actress is seen moving around the house with a Nokia phone in hand, highlighting different bits of the Diwali gathering, and is just taking pictures with the phone here and there (we really think there is more that can be done with a phone – battery, UI, build, and so on). The phone just keeps sitting pretty in her hands, barely making it out of the clutches of the celeb, majorly focusing all its attention on her.

To be blunt, we think the ad lacks clear direction. It perhaps tries really hard to touch different aspects of the smartphone but ends up focusing on only one feature: the camera. And in all honesty, we do not think it did justice to even the cameras on the phone. The ad showcases how the phone takes panoramas, selfies, portrait shots, and GIFs but does not tell us what is so special about the phone itself or its cameras- these features can be easily found in most budget smartphones. What’s so special? We did not get it, unless it was of course, that the phone happened to be in them celeb hands.

Diwali is coming and we expect brands to bomb us with Diwali themed ads, but honestly, we think, the company could have used the occasion better. The ad does not bring out any connect between the festival and the brand. Nokia used to boast about the brand “connecting people” but in this case, the brand is highlighting very generic features, which probably most smartphones present in the market today can match. Ironically, the “do what only you can do” line does not come through in the ad at all. All we see is a celebrity using a phone normally and doing nothing that seems out of the ordinary by modern smartphone standards – bokeh? Others do that too. Panorama? Duh, everyone else has that. Selfies? Please!

Tell us what only YOU can do, Nokia 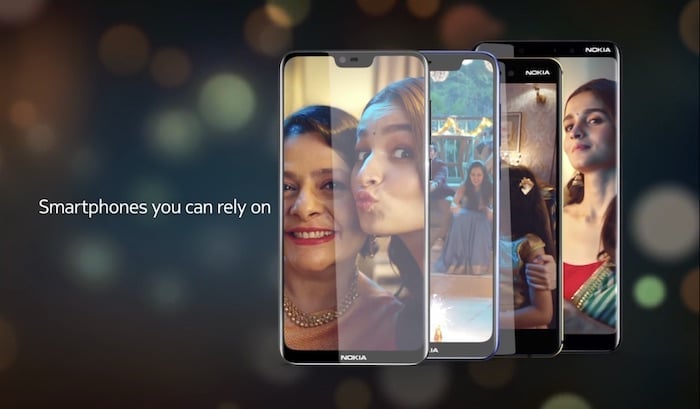 The ad, in our opinion, is missing the creative spine in its structure as everything that it has served us seems stale. The idea of a celeb going around gatherings taking pictures has not just been used but overused. And in a day and age where companies spend billions on marketing campaigns, we were expecting a little more, especially from a company like Nokia that has a long history of creating good (and often exceptional) emotional appeal ads – remember the ad about the mother missing her son last year? This ad may claim to have talked about things only you can do at your family gatherings but ironically shows what MOST people do on such occasions. And it has definitely not talked about what ONLY Nokia can do.

Was this article helpful?
YesNo
TechPP is supported by our audience. We may earn affiliate commissions from buying links on this site.
Read Next
Nokia Power Earbuds Lite Review: Connecting through Clear Audio against Tough...
#Alia Bhatt #HMD Global #nokia #Tech Ad-ons