Facebook, The Social Network, completed fifteen years of existence on February 4. And in these fifteen years, the network has seen more than its fair share of ups, downs, and controversies. While some hail it as a meeting ground of friends from all over the world, others accuse it of promoting vanity and of actually being a propagation of false news. We are not getting into that debate today, but as the network turns fifteen, are celebrating it by bringing you fifteen amazing facts about it: (and we are trying to go beyond amazing figures and stats and the oft-told story about how it started) 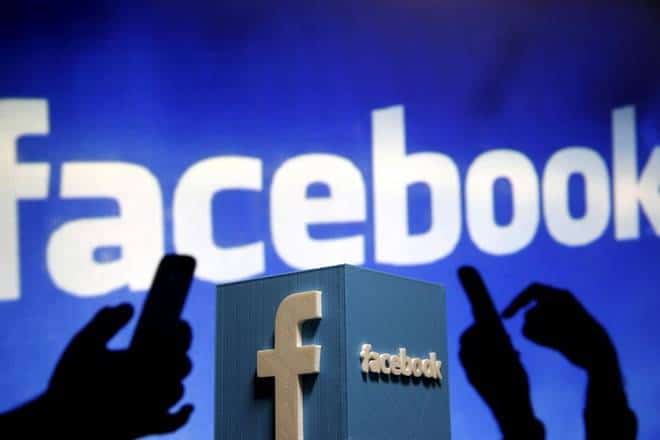 Where does the name Facebook come from? Well, it is derived from the “face books” that were given out by universities in the US to familiarise students with each other at the start of the academic session. These were directories that contained pictures of students and their names.

2. Mark could not see red or green…so…Blue!

What is the reason for Facebook’s primary blue color? Well, there are a few theories out there, but many say it is because the social network’ s founder Mark Zuckerberg is color blind and cannot get red or green, and is most comfortable with blue color. Well, no one is feeling blue about it!

3. But there’s a yellow one too

So Facebook is always available in blue, right? Wrong. As per some sources, there is a yellow version of Facebook too. But it is available only to a select number of employees in the company and is used to test out features before they are launched.

4. The face of the Godfather

The first logo for Facebook was designed by Andrew McCollum, Mark Zuckerberg’s classmate at Harvard in 2004. It was a face covered with ones and zeroes, representing its digital side. Not too many knew it at that time, but the face was that of legendary Hollywood actor, Al Pacino. 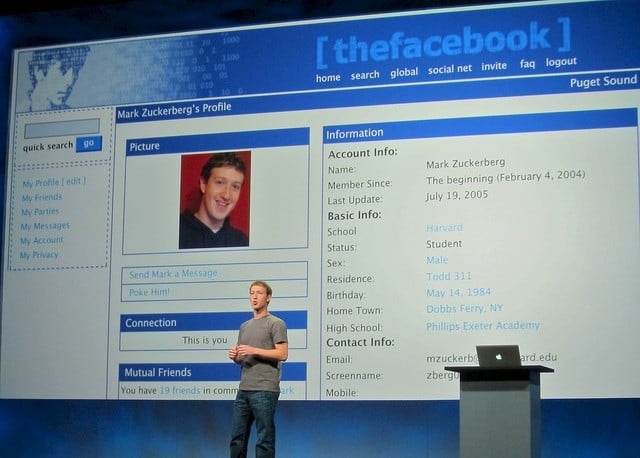 Facebook started out as TheFacebook – yes, with a “the” in the name – because the company could not get the facebook.com URL which was being used by AboutFace. But as the social network began to get popular, a key personality suggested that it drop the “The” from its name. This was Sean Parker, the founder of Napster, who strongly stressed the need to remove “The” from the name and URL. Facebook listened, and the URL was evidently purchased for USD 2,00,000. The network also changed its name to just Facebook.

6. …and some photo sharing too

Parker played a key role in Facebook’s formative years. He was the social network’s first president. And not only did he get the “the” out of its name, but is also supposed to have been the moving force behind one of its key features: photo sharing.

7. Food, glorious food…and for free too 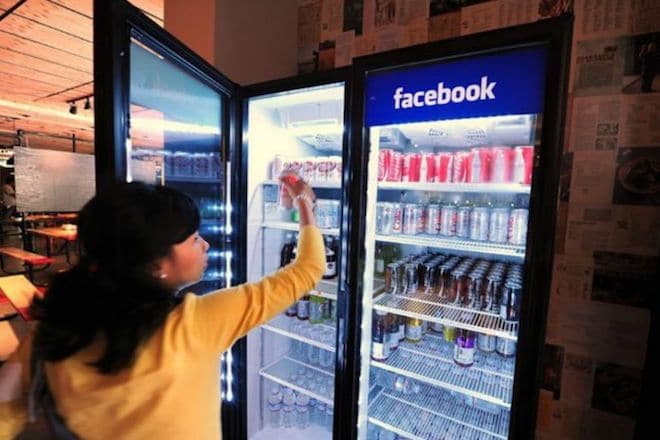 Whatever you are short of while working at Facebook, it certainly will not be food. The office has outlets that serve yogurt, toppings, ice cream, and candy. Free of charge. The cafes also serve three meals a day five times a week and helpfully label food as green, yellow or red, depending on how healthy it is.
`

The popular “like” button on Facebook which allows users to show their approval and applaud content, would have been labeled “awesome” if some Facebook engineers had had their away. However, Zuckerberg is believed to have not liked the idea in 2007 and the network decided to go with “like”, bringing the button into existence in 2009.

9. If you think your work is done, look up 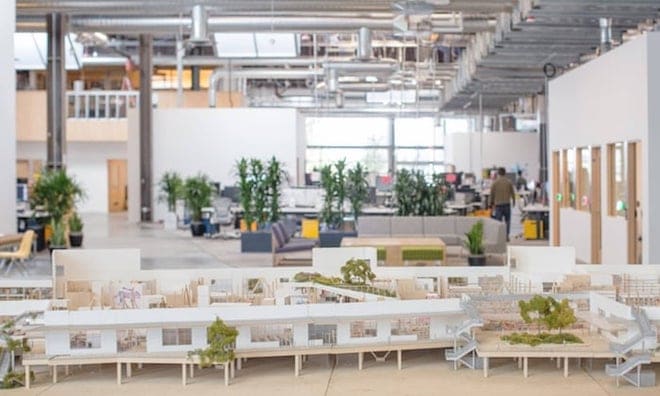 The Facebook office evidently has unfinished ducts on its ceiling. This is not a sign of design sloppiness or oversight. Evidently, these exist to remind people that their work is never done.

One of the first major investors in the new social network, was Peter Thiel, the co-founder of PayPal. He invested half a million Dollars in it in 2004. It was a sound investment – he later sold his stake for more than a billion Dollars.

Steve Jobs is believed to have thought of giving Facebook a chance to present its app at WWDC 2008 (the App Store was still relatively new at that time). However, things are believed to have gone wrong when Zuckerberg reportedly decided not to do the presentation and instead sent a marketing manager to do it (and not too well, as per some sources). Steve was not appy. The presentation did not take place, of course. 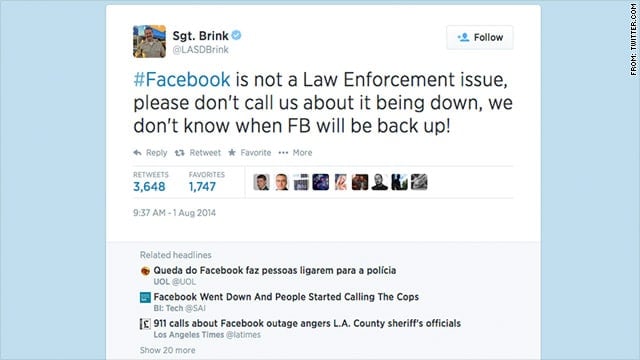 The size of Facebook’s membership and the number of people almost addicted to it is well documented. But the impact it has on people’s lives can be gauged by the fact that when Facebook was disrupted for about half an hour in August 2014, many people actually called the 911 Emergency number. Things got so bad that an officer tweeted: “Facebook is not a law enforcement issue, please don’t call us about it being down, we don’t know when FB will be back up.”

13. Missing out on Mr. WhatsApp 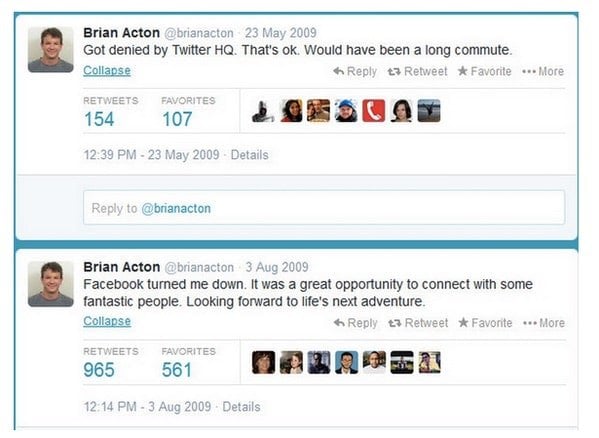 It might be one of the world’s most popular social networks but Facebook has made its share of embarrassing mistakes. One of them undoubtedly was missing out the chance to hire Brian Acton, the man who went on to co-found WhatsApp Messenger. “Facebook turned me down. It was a great opportunity to connect with some fantastic people. Looking forward to life’s next adventure,” Acton famously tweeted on August 3, 2009. Of course, he would later launch WhatsApp, and Facebook would eventually purchase it for a colossal USD 19 billion in 2013. Incidentally, Twitter too had turned down Acton a few months before Facebook (“Got denied by Twitter HQ. That’s Ok. Would have been a long commute,” Acton tweeted on May 23, 2009).

14. No cubicles in office

Facebook offices are generally supposed to have no cubicles. This is to stress the openness of the organization and also to encourage collaboration. It does seem to work!

Love him. Hate him. Ignore him, even. But you CANNOT block Mark Zuckerberg on Facebook.

Wordle Game: Ten Facts About the Latest Rage on the Internet
Read Next

Ten years, Ten Amazing facts about the iPad
10 Amazing Facts about Microsoft Windows you Probably Didn't…
PS2: I love you! 20 years, 20 facts about the PlayStation 2
Facebook announces Facebook Pay for Facebook, Instagram, and…
Happy Birthday to Mi: Ten Years, Ten Things You Might Not…
Seven Years, and STILL Going Strong: What Makes the ATH-M50x…