How to Watch Grammys 2019 Online for Free

If you’ve cut the cord and want to stream the Grammys, here’s where to find it online for free.

The 61st Annual Grammy Awards are scheduled to be held on February 10th, 2019 from 8 p.m. ET/5 p.m. PT at the Staples Center in Los Angeles, California. As always, CBS will be broadcasting the Grammys 2019. If you’re looking to watch Grammys online, you have come to the right place, as we tell you the different ways to watch Grammy awards 2019 on various devices of yours. And guess what? Alicia Keys will be hosting the Grammys 2019, following the footsteps of recent hosts which included James Corden (2017, 2018) and LL Cool J (2012-2016).

The Grammys performance lineup includes Cardi B, Miley Cyrus, Shawn Mendes, Ricky Martin, Janelle Monáe and a whopping ten more impressive live acts. Kendrick Lamar leads the pack for the 2019 Grammys, with eight nominations, including Record of the Year and Song of the Year for “All the Stars”. In the past, CBS was known to delay the streaming of Grammys, but that got changed a couple of years back. While the live broadcast of the actual Grammys starts at 8 p.m. ET/5 p.m. PT, the red carpet will start much earlier. And cord-cutters can still stream Grammys live online. We tell you how.

Much like last year, CBS will be live streaming the Grammys online through the CBS All Access subscription service. The live stream will be viewable on desktop or the CBS mobile app for All Access subscribers. You can also stream it on your Apple TV, Roku or Amazon Fire TV Stick. In case you are wondering, the subscription for CBS All Access will cost you $5.99-per-month, but here is a trick to watch Grammys online for free! You can sign up for a free one-week trial! The CBS All Access service also allows people to watch other live events and CBS shows on demand. If you ask us, it’s worth the subscription beyond the free trial.

IT'S OFFICIAL! 15-time GRAMMY winner @aliciakeys will host the 61st #GRAMMYs⁠⁠, marking her first time as master of ceremonies for Music's Biggest Night.

Unlike previous years, Grammys live stream on CBS All Access won’t be restricted to few states but will be available across the country. The Grammy Awards 2019 live stream will start at 8 PM ET. The official Grammys and CBS apps will have a live stream of the GRAMMY Awards Premiere Ceremony and red carpet festivities starting at noon PT/3 p.m. ET, and the app will offer a second screen experience of sorts for those viewing the awards on TV at home. 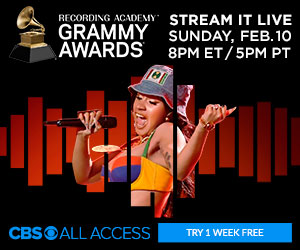 If you pay for an online cable service like Hulu Live or YouTube TV, you should still be able to watch the awards show live by tuning into CBS while it airs. Do note Hulu Live TV comes with a seven-day free trial, while YouTube TV has five days free. DirecTV Now will also live stream Grammys and has a one-week free trial.

But what if you don’t have CBS subscription, well, you aren’t completely out of luck. E! Online will be the live streaming the Grammys red carpet on their website. For those who can’t catch the Grammys live stream, can go visit the YouTube channel for frequently updated clips.

If you are outside of the US, there’s no official legal live stream of Grammys 2019. But in the past we have seen some low quality (and probably illegal) streams on sites like Ustream.tv. Alternatively, subscribe to CBS All Access and use one of the Free VPN services to bypass the geo restrictions. Let’s see who will rule the roost at Grammys 2019. Will it be Cardi B or Drake or Brandi Carlile?