It is perhaps one of the most nuanced reactions we have seen to a high-profile error. The Internet was buzzing yesterday with how US President Donald Trump had referred to Apple CEO Tim Cook as “Tim Apple” at a White House event. “You’ve really put a big investment in our country. We appreciate it very much, Tim Apple,” the US President told the Apple CEO who was seated near him. Of course, the comment launched a thousand memes and remarks.

It also resulted in a subtle reaction from the Apple CEO. He actually changed his name to Tim Apple on his official Twitter account. 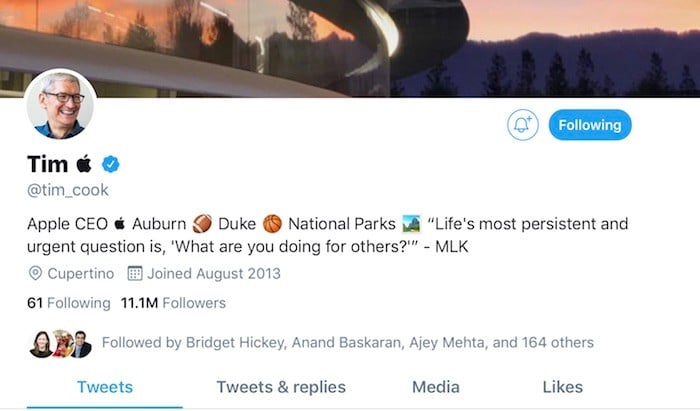 Twitter users who will access the Apple CEO’s account on the social network on their iOS and Mac OS devices will see “Tim” and an Apple logo next to it. No, it is not visible on devices from other platforms, but for all Apple product users, Tim Cook at the Time of writing is “Tim Apple” indeed.

Is that the best Twitter name ever? Well, it certainly is one of the best. Steve Apple must be laughing somewhere.

Was this article helpful?
YesNo
TechPP is supported by our audience. We may earn affiliate commissions from buying links on this site.
Read Next
With Football Manager 2023 Touch, Apple Arcade finally has its “killer ...
#apple #Tim Cook #twitter