It has been raining Samsung smartphones, especially in the budget and mid-segment. So much so that one could even say that Samsung is actually trying to create its own ‘Galaxy’ of budget and mid-range smartphones. Pardon the bad pun, but it actually is true. The South Korean giant has been launching phones left, right and center and is spreading them like peanut butter and jelly all over the market. And the rain shows no sign of stopping. The brand has added another smartphone in the mix to carry this smartphone frenzy on – the Samsung Galaxy A70. It is the most expensive of the M and the A series smartphones we have seen in India recently, with a price tag of Rs. 28,990. Needless to say, with that price tag come great expectations. 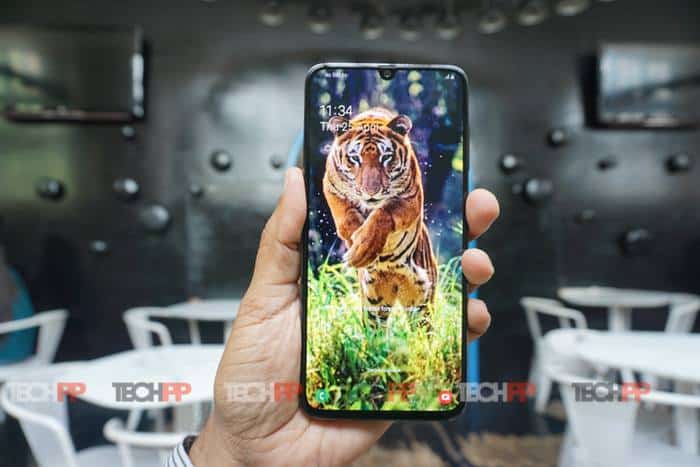 There is a design pattern book in town and all brands seem to be taking pages off it lately for their smartphones. Samsung is no different. Much like many recent Samsung A and M series devices, the Galaxy A70 also comes with a glass-like polycarbonate back which is reflective and creates different patterns when light falls on it. This one, in particular, has a very prism-like effect and reflects a rainbow pattern when put in light – shades of the A50. With all the smartphones with gradient finish backs and different patterns in the market today, the back of the Samsung Galaxy A70 is not going to wow you. Yes, it looks beautiful and adds a very premium touch to the device but it is nothing extraordinary. Not any more. The back houses the triple camera setup arranged vertically in a capsule on the top left side of the back. Following the camera is a circular LED flash and a little down south from the flash sits the company’s logo. 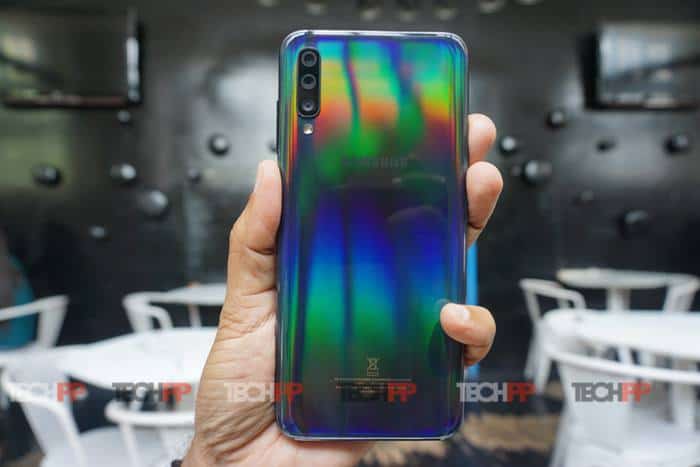 There are no two ways about it: the Galaxy A70 is a tall phone, although its deep blue back curves gently outside on the edges, making it slightly comfortable to hold. The tallness of the device stems from the display the phone sports on the front. The Samsung Galaxy A70 comes with a massive 6.7-inch full HD+ Super AMOLED display. Following in the footsteps of “more display, less bezel” smartphones, the A70 brings very slim bezels and a dot notch to the table. The bezels are almost completely absent and the display is surrounded by thin black lines from three sides (top, and the two sides), although the chin, on the other hand, has been dealt a slightly thicker looking bezel card. For all the discomfort and drop-proneness the tall display of the A70 might bring to the table, that display does look beautiful at first glance.

Sandwiched between the glass front and the polycarbonate back is the metal-like frame that holds a 3.5 mm jack, USB Type C port, and speaker grills on the base while the top is relatively plain. The left side of the frame holds the multi-card tray, with dedicated slots for a microSD card and two nano SIM cards. The right side carries the volume rockers and the power/lock button.

At 164.3 x 76.7 x 7.9 mm and 183 grams, the smartphone is obviously tall and lands on the heavier side of the weight scale. Pocketing and even holding it with a single hand might be a task, let alone one-handed usage, although if you are keen on using the phone with a single hand, Samsung does offer a One-Hand mode which is nestled away very deeply in the settings. 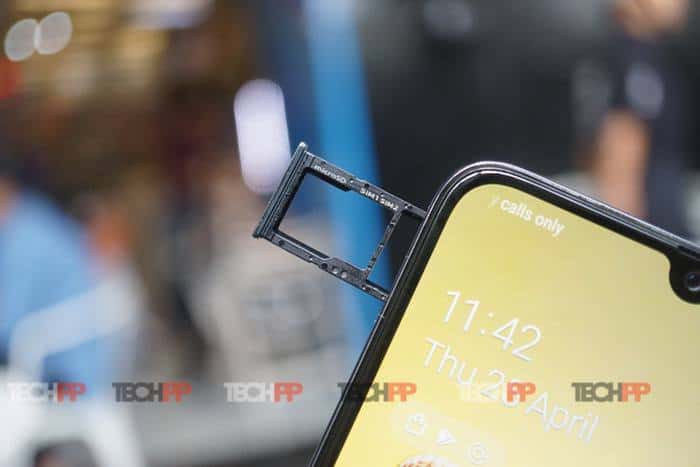 The design of the Galaxy A70 is definitely impressive, although it stops well short of mind-blowing, and the same is the case in the specs department. The smartphone comes with a very tall (we cannot keep stressing that) and beautiful 6.7-inch full HD+ Super AMOLED display with a drop notch that houses the front camera. The A70 is one of the few new Samsung devices that comes with a Snapdragon processor in India. It is powered by the Qualcomm Snapdragon 675 chipset which is paired with 6 GB RAM and 128 GB storage. The storage can be expanded up to 512 GB using a microSD card.
Triple cameras seem to be becoming a Samsung favorite as we have seen quite a few triple primary camera setups from the brand recently (the M30, the A50, and of course the mighty S10+ itself) and joining the party is the Galaxy A70. It houses a 32-megapixel main sensor with f/1.7 aperture and PDAF, alongside an 8-megapixel ultrawide sensor and 5-megapixel depth sensor, both with f/2.2 aperture. There also sits another 32-megapixel sensor on the front with f/2.0 aperture for selfies and video calls – one of the biggest in megapixel terms that we have seen on a Samsung device. Wondering where the physical fingerprint scanner on the device is? Well, the A70 comes with an in-display fingerprint sensor. 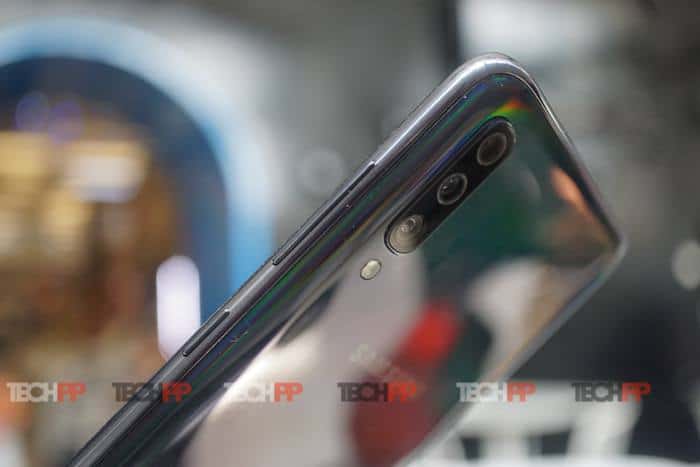 The device comes with Android 9 (Pie) out of the box which is topped with Samsung’s OneUI 1.1 variant, which claims to be cleaner and less cluttered than the much-maligned Experience UI and TouchWiz. All the tallness also means there’s more space for battery, and Samsung has added a big battery to the A70 mix. It runs on a big 4,500 mAh battery with support for fast charging (there is a 25W charger in the box as well – we wish Xiaomi would learn something from this). The connectivity options on the smartphone include 4G, Wi-Fi, GPS, Bluetooth 5.0. 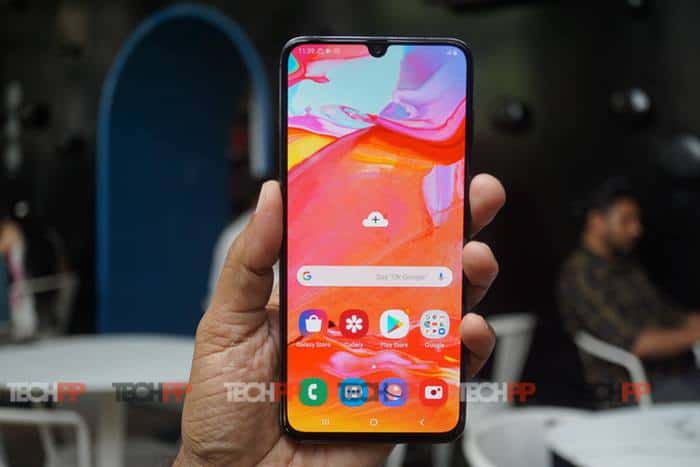 Priced at Rs. 28,990, the Samsung Galaxy A70 comes packed with features but still finds itself in a bit of tough spot. Yes, the smartphone looks premium and comes with good specs but the competition in the sub Rs 30,000 segment is pretty fierce. The device faces heat from Vivo V15 Pro that comes with a very fast pop up 32-megapixel selfie camera and a 48-megapixel main sensor on the back. It brings a relatively smaller 6.3-inch full HD+ AMOLED display to the table but we think that actually can be a positive for the V15 Pro against the tall A70. The device also faces competition from the good old Poco F1, that has laid all its competition to waste with its Qualcomm Snapdragon 845 processor. And there is also the little matter of the well crafted, stock Android endowed Nokia 8.1. Can the Samsung Galaxy A70 beat the heat and come out as the ultimate smartphone between the mid and the premium range? Wait for our detailed review.

Was this article helpful?
YesNo
TechPP is supported by our audience. We may earn affiliate commissions from buying links on this site.
Read Next
Samsung Galaxy S22 Ultra Long-Term Review: The Updated, Up-Noted Android Univ...
#First Cut #First Impressions #hands on #samsung #Samsung Galaxy A70