The 2019 OnePlus devices are finally here! And this time around the company has announced two new smartphones, the OnePlus 7 and OnePlus 7 Pro, changing its update-cycle scheme from one model to two. Likewise, the launch event took place at different cities across the world including the US, UK, and India, with China launch on May 16. 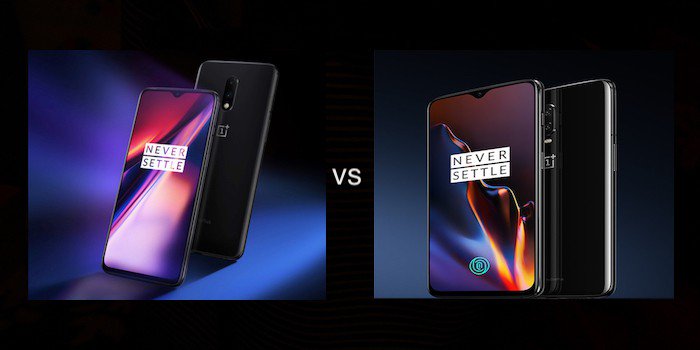 The price for OnePlus 7 starts at Rs 32,999, whereas, for the Pro model, starts at Rs 48,999. With that difference in price, it is pretty evident that both these devices are designed to cater to people with different requirements, and for the most part, they seem to do a pretty decent job with that pricing.

With almost similar pricing for the OnePlus 6T and OnePlus 7, it would be confusing for a lot of people to decide between both the devices and for some, who already own a OnePlus 6T, whether the upgrade is worth. So to make it easier, here’s a detailed comparison between the OnePlus 7 and the OnePlus 6T.

Another major deterrent for a lot of users when deciding between two smartphones is the battery. Unfortunately, there’s no difference in the battery capacity on both the devices and they come with a 3700mAh non-removable battery with Fast Charging.

Another essential these days, user authentication is achieved using the same in-display fingerprint scanner and face unlock mechanism on both OnePlus 7 and OnePlus 6T. To jog your memory, the OnePlus 6T was the first OnePlus device to offer this authentication mechanism, and the same has been retained by OnePlus on the newly launched OnePlus 7.

The OnePlus 7 and OnePlus 6T have identical connectivity specifications with 2×2 MIMO, Wi-Fi 802.11 a/b/g/n/ac, 2.4G/5G, Bluetooth 5.0, NFC, GPS, GLONASS, and Galileo. Not to mention, dual nano-SIM slot support on both the devices.

Another major deterrent when deciding to buy a smartphone is the camera. And over the years, OnePlus has been constantly making efforts to improve the image and video quality of their camera and reach a point where their camera can stack up against other major competitors.

When stacked up against each other, the OnePlus 7 comes out as a winner with a much better 48MP + 5MP shooter on the rear, which is a massive upgrade from the 16MP + 20MP shooter found on the OnePlus 6T. In terms of the front-facing camera, both devices offer the same 16MP shooter with f/2.0 aperture and 1.0 µm pixel size. In terms of other additional features, the OnePlus 7 manages to get an upper hand over OnePlus 6T with the addition of RAW Image, Pro Mode, UltraShot, and AI Scene Detection up its sleeve.

The OnePlus 6T offers some really good specifications, which, when stacked up against some of the other smartphones out there, showcase an at par (if not better) performance. And for most people, that performance should suffice their daily tasks and even a lot of intensive tasks for that matter. However, for those wanting the best of their device, the OnePlus 7 is an ideal choice. With a powerful processor, capable of delivering better overall performance and a major camera upgrade, the OnePlus 7 definitely stands out superior to the OnePlus 6T in most aspects.

Was this article helpful?
YesNo
TechPP is supported by our audience. We may earn affiliate commissions from buying links on this site.
Read Next
Snapdragon 782G vs Snapdragon 778G Plus: What Has Changed?
#comparison #oneplus #OnePlus 6T #OnePlus 7