“Oh, why?”
“Well, Microsoft insists that’s what I should be called. I am in their new Surface ad, you know!”

“Wow, that’s so cool. What are you going to be doing?”
“Well, it’s really kinda simple. It is a very basic ad, you know. They introduce me as a real person called Mac Book. And then I sit with a Surface Laptop 2 and a MacBook…”

“Wait, so you sit with yourself? As in a duplicate? A clone?”
“No, I sit with a MacBook computer and a Surface Laptop 2…”

“Who is this Sir Face Laptop 2?”
“No, Surface Laptop 2 is actually a computer.”

“Well, someone could be called Sirius Face and you could call him Sir Face (Surface, geddit!?)… I mean, why does only the MacBook get human representation?”
“Whatever, it is Microsoft’s idea. Lemme tell you about the ad, really…”

“Oh yes, a human with a name like a computer talks about two computers. This is very convincing already!”
“Oh come on, it is actually a lot of fun. So there is this voice over which asks me questions like which lasts longer, which one is faster, and the best one: which has the better touchscreen. And I reply that the Surface is better. I even point out that the MacBook does not have a touchscreen. And every time I replay, the voice-over repeats what I have said with text appearing on the screen, saying “Mac Book says Surface lasts longer.’ ‘Mac Book says Surface is faster,”. And in the end, I say, “You should get a Surface. Trust me, I am Mac Book.” And the words appear on the screen at the end ‘Mac Book says get a Surface Laptop.’ Hilarious!” 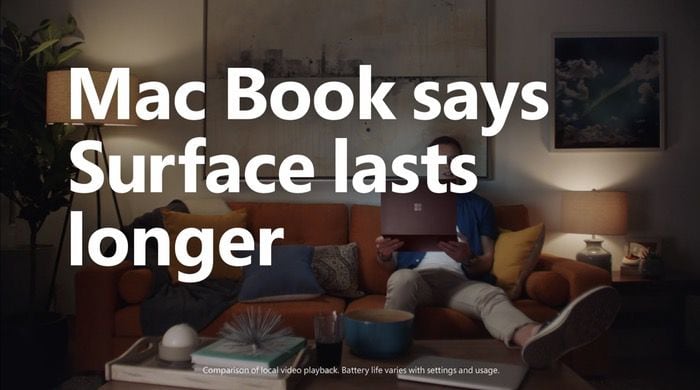 “Oh in those tiny letters that are barely there for a few seconds? Right! Why not the MacBook Pro?”
“Oh come on, the Air is reasonable competition.”

“It is? It is meant for portability and does not go above a Core i5, whereas the Surface Laptop 2 seems more for a power user – I think it has a Core i7 version and even a 16 GB RAM version. Oh anyway, you must have mentioned it in the ad…”
“No, we didn’t, actually!”

“Oh, but when you say that the Surface is faster or lasts longer, you, of course, give data or information on how it lasts longer – battery statistics and all, or maybe you just make some symbolic representation, showing stamina?”
“Well, I say it lasts longer. And there is a small note on the ad…”

“Oh, again those tiny letters – ‘Comparison of local video playback. Battery life varies with settings and usage.’ And how do you show the Surface is faster. Wait, you played some high-end game on it and showed how fast it loaded and how smoothly it played, right? Or a benchmark?”
“Well, no. I just say it is faster and there is…” 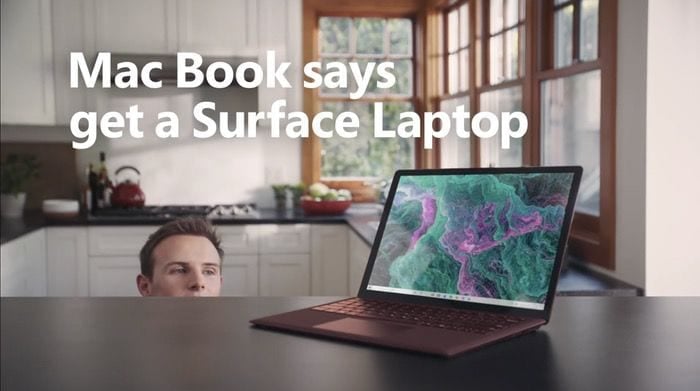 “Wait, I know. A note in tiny font at the base of the screen, right?”
“Yeah, it says ‘GeekBench Multi-Thread Score Comparison’.”

“But why should anyone believe you? Are you introduced as a tech expert? A geek? A regular notebook user?”
“Well, I am Mac Book. It is a pun, you know. Like MacBook says Surface is better, you know? A play on words”

“So basically, if you had been called Samuel Sung, the ad would have said ‘Sam Sung says Surface is better. What’s next? Someone called Ian Padmore and perhaps call him I Pad?”
“Wait, wait, this is just a light-hearted banter…”

“About two very expensive computers! Come on, you had so much to talk about, dude! I mean, you could have totally ripped that Butterfly keyboard of the MacBook apart…”
“I don’t have a Butterfly keyboard, dude!”

“No, I meant the computer!”
“Oh…sorry, but hey, come on, Apple made Mac vs PC ads too, remember. And they had people representing computer…”

“Yes, but both the Mac and the PC were people. I mean okay, you are a young person from Australia who dresses casually and represent MacBook. Who is Surface?”
“I don’t know. I am Mac Book. The ad is really about me…” 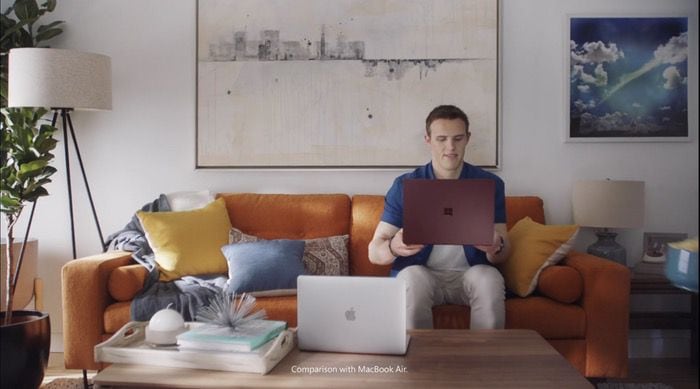 “Who just says you should use a Surface, without giving any comparative data or information to back up his claims, unless one looks at those tiny notes, with zero figures, at the base of the screen, which most people will miss?”
“Yeah.”

“And we are supposed to believe it because a person called Mac Book says Surface is better than a MacBook?”
“Yeah. Cool, isn’t it?”