As the world battles with the Corona Virus, a number of developers are doing their bit by making apps and games available at concessional prices or even free of cost, to help people work or while away the hours while staying at home (so essential in lockdown areas). We had Alto’s Odyssey and Alto’s Adventure become available free of cost a few days and now award winners have just lost their price tags on both Android and iOS – Lara Croft GO and Monument Valley 2.

There will be some who will grumble about the games being a bit on the old side. Fair enough, Lara Croft Go was released in 2015 and Monument Valley 2 arrived two years later. But both games have aged remarkably well, and are still an absolute treat to play and in our opinion, every bit as good as any out there right now. Best of all, they are both single-player games so you do not need anyone else to play them. You can just pick them up and play away.

Both titles are puzzle games with a hint of adventure and both have female leads but there their similarities end. Lara Croft Go as its name indicates, allows you to step into the shoes of the athletic archaeologist, Lara Croft, the star of the epic Tomb Raider series. And in best Tomb Raider tradition, you have to roam, jump, hang on and roll around as you search for artifacts and generally attempt to save the world. Of course, there are enemies in your way, and there are some battles to be fought but this is mainly a puzzle game with more than 115 puzzles all spread over seven chapters. The graphics remain very good with a top-down view and lush and detailed environments (very similar to the Apple Arcade title, Where Cards Fall) and the gameplay is incredibly simple, with you having to mostly tap and swipe most of the time. It is a hefty 1.2 GB download but there are hours of riveting gameplay here.

The gameplay of Monument Valley 2 is if anything even simpler, with you, just having to tap the display most of the time. But here you have two characters, a mother and her daughter, and your task is to guide them through a number of architectural puzzles. There are levers to be moved, pathways to be discovered and a whole lot more. A 500 MB plus download, Monument Valley 2 is again a visual treat but in a more minimalistic way as compared to Lara Croft Go. The focus is more on highlighting intricate architecture, while the surroundings themselves at times almost seem nonexistent. It is as if you are navigating a palace hanging in the air. Another strength of the game is its almost zen-inducing music. It is not action-oriented at all (Lara Croft would disapprove) but again you have dozens of puzzles to deal with, and they keep getting more difficult as you go ahead. 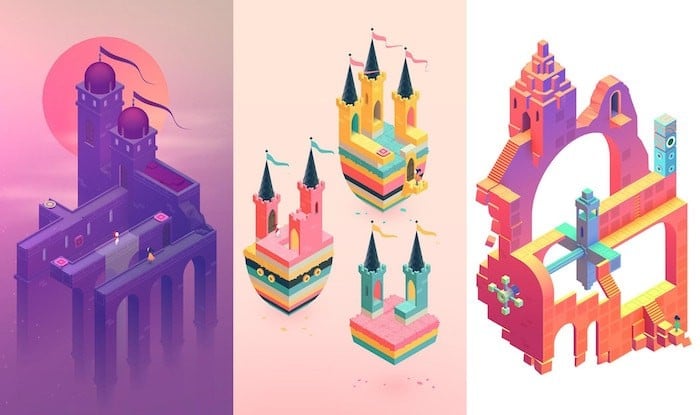 All in all two wonderful games that can serve up several hours of extremely challenging entertainment (no mindless button-mashing titles these) and also still look and sound wonderful. And they are free. We have no idea for how long (a week seems to be the popular estimate), but we certainly would recommend downloading both! Warning: they are extremely addictive.

Was this article helpful?
YesNo
TechPP is supported by our audience. We may earn affiliate commissions from buying links on this site.
Read Next
10 Hidden Free Games on Google: Solitaire, Tic-Tac-Toe, and More
#CoronaVirus #free games