Asus ROG Phone 3 Review: It’s All About the Numbers!

When Asus launched the ROG Phone 2 last year, it created a lot of buzz by pricing it aggressively at Rs. 37,999 and for that price, the kind of specs that it offered on paper was a dream for any smartphone enthusiast. As a result, the ROG Phone 2 remained out of stock most of the time which can be indicative of the fact that the phone was relatively well-received in India. 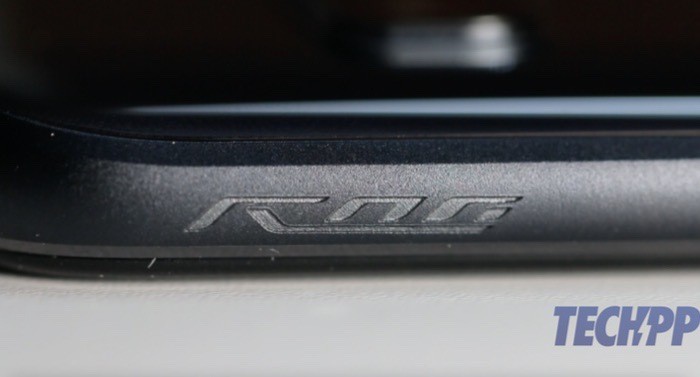 With the ROG Phone 3, Asus wants to ride on the success of the ROG Phone 2 but in a different price segment this time, thanks to 5G chips from Qualcomm being expensive, increase in GST rates, and the fluctuating dollar value. At Rs. 49,999, the ROG Phone 3 is arguably the most spec’d-out phone one can purchase. But the bigger question is if those numbers on paper actually translate to a good real-world experience. Having used the ROG Phone 3 for almost the past two weeks, we will tell you if you should pick one up for yourself. Here’s the Asus ROG Phone 3 Review.

The ROG Phone 3 carries over the typical gaming aesthetics from the ROG Phone 2 but tones it down just enough to attain a slightly more sober look. The ROG Phone 2 looked like a portable gaming console that was also a phone. ROG Phone 3 looks like a phone that can also play games. Subtle difference, but it’s a welcome change. What hasn’t changed, however, is the weight of the ROG Phone 3. 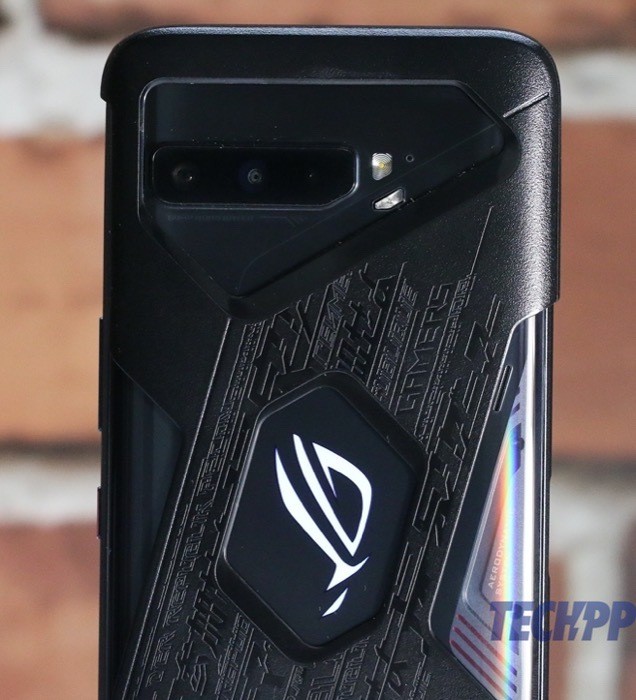 At 240 grams plus a few more that a case would add, you’re looking at a thick, heavy slab of metal and glass in your hands and pocket throughout the day. The difference is noticeable especially since the ROG Phone 3 is huge and when combined with the weight, you just cannot use the ROG Phone 3 one-handed without the fear of dropping the phone overshadowing your laughter from a TikTok video. Oh, sorry, shouldn’t matter if you are in India.

Anyhow, the gist of it is that the ROG Phone 3 is heavy and it’s not something you can ignore as it’s quite evident while using it. It does, however, carry a big advantage which we will talk about in the battery department. The glass back carries the ROG logo which of course, in true gamer sense, is backlit with RGB LEDs and accentuates the gamer look. The metal frame houses touch-sensitive areas that Asus refers to as air triggers and these can be customized to perform any function that you may want inside a game.

While most of the design aspect so far has been pro-gamer, what is not is the move to get rid of the headphone jack. Asus has included a USB-C to headphone jack adaptor within the box itself to make up for it which makes sense since you get two USB-C ports on the device so if you are using earphones with one port, the other one is vacant if you want to charge your phone simultaneously or you wish to stream your gameplay using a capture card. The ports on the left side of the phone can also be used to attach additional accessories like a cooling fan, PC dock, etc.

Just the way the basic design template of the back of the ROG phone 3 remains unchanged, the look on the front also remains largely the same. There are pretty thick bezels surrounding the 6.6-inch 1080P AMOLED display but that is understandable since the phone is targeted towards gamers who would appreciate the extra real estate to rest their palms. The dual front-firing stereo speakers are now stealthier in black compared to the copper accents on the ROG Phone 2 which is a welcome move. 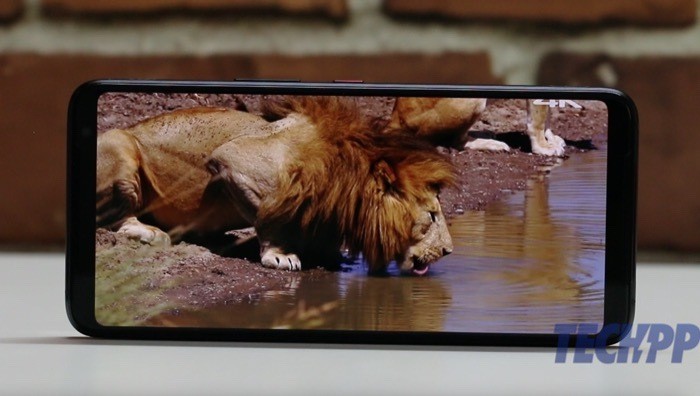 The display itself, though, has gotten a few important updates. The refresh rate is now 144Hz which feels faster than ever, the touch response rate is 270Hz, it is HDR 10 compliant, and overall, it’s beautiful and it’s fast. If you haven’t realized already, this phone is all about being FAST. Right from animations to touch response to scrolling, the display is one of the snappiest we have used. Content consumption too is a treat with colors popping out. However, the display is slightly on the warmer side which may not appeal to you if you are very particular about the way you see whites on the screen.

Going back to those bezels, apart from being there to provide extra space to hold the device, they also serve two very good purposes that seem to be diminishing gradually with newer phones – front-firing stereo speakers and our personal favorite, a notification LED. The speakers get ample loud which adds to the overall experience while watching videos/movies. 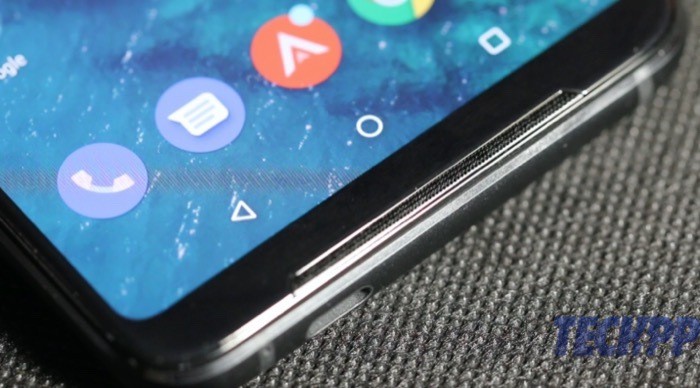 The Asus ROG Phone 3 is one of the first phones to be launched with a Snapdragon 865+ chipset which breaches the 3GHz clock speed mark for the first time on a smartphone. When coupled with UFS 3.1 storage and LPDDR5 RAM, and not to forget, that fast refresh rate display, everything you do flies on the ROG Phone 3. Yes, that is an overused statement, but trust us when we say this, the speed at which apps launch on this phone, it actually feels like things are flying on the screen!

Be it intensive apps or games, the ROG Phone 3 is a performance champ and it’s not surprising either since that’s exactly what one would expect from a phone with major emphasis on gaming. That being said, it’s not necessary that only a hardcore gamer would enjoy the way the ROG Phone 3 performs. Even basic apps like WhatsApp and Instagram feel smoother on the ROG Phone 3 compared to other phones and this just enhances the overall experience.

While the hardware is excellent, software optimization also plays a very important role in the way a phone performs and Asus has done well in this department too. The skin that the ROG Phone 3 is running is very close to stock android with added customization and tweaking options like the ability to change themes, armory crate to specify different functions for the RGB lighting and triggers, and helpful tweaks that enhance the user experience. That being said, it’s not perfect as we did encounter some slight freezes from time to time that needs to be ironed out via updates. 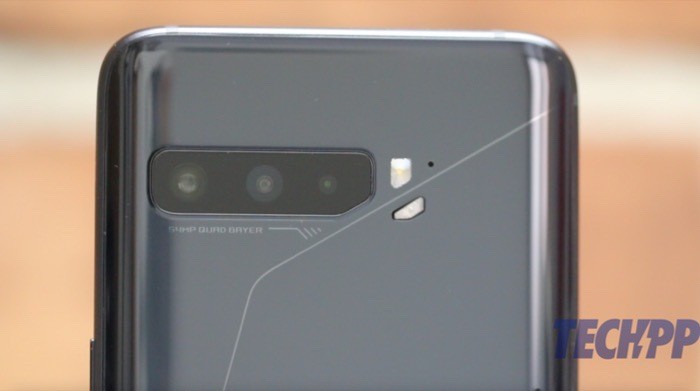 The way brands dedicate most of their R&D towards the performance of a gaming phone, it is automatically assumed that the camera is the Achilles’ heel of a gaming phone. While that’s not entirely true on the ROG Phone 3, it certainly is one aspect that Asus could have worked on to make the ROG Phone 3 a more all-round device than it currently is.

The primary 64MP Sony IMX 686 camera does a good job in well-lit conditions but the dynamic range certainly could have been better as the shadows are not exposed very well. Colour reproduction is good and the natural bokeh adds to the overall look when capturing a close-up subject. While the details are preserved well, thanks to the high megapixel count, there seems to be some sort of over-sharpening that is evident even in low-light scenarios. 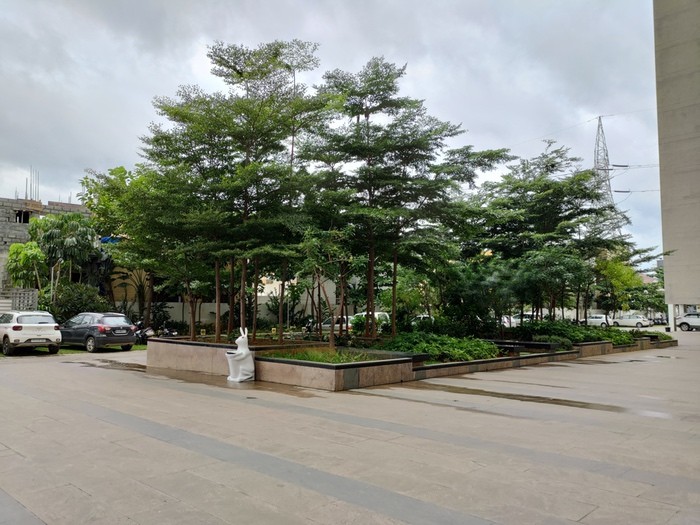 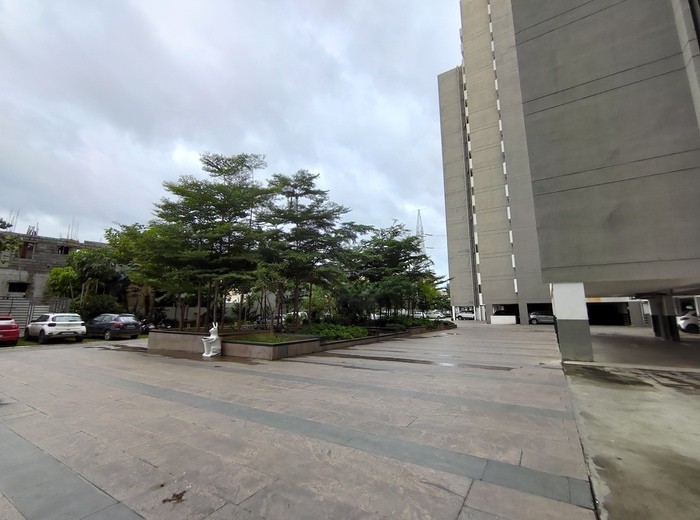 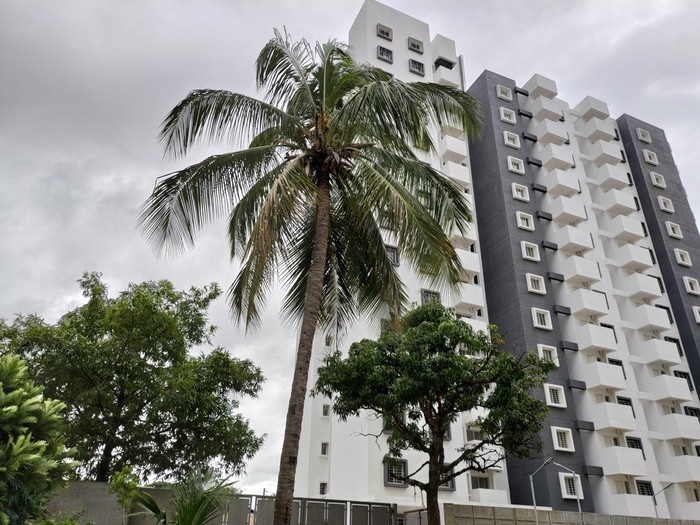 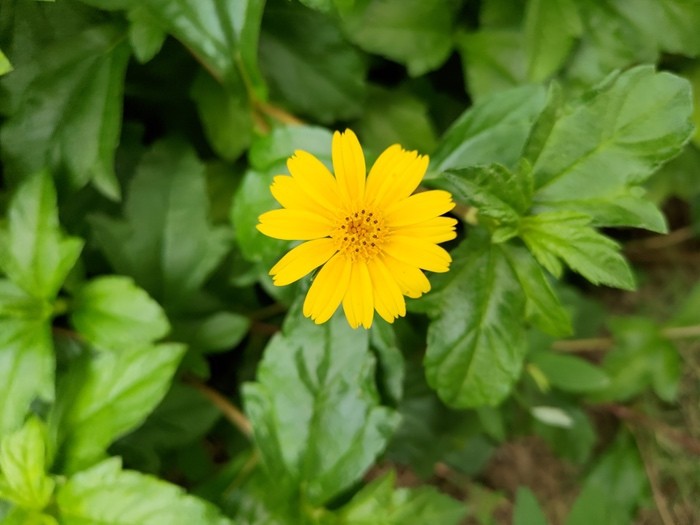 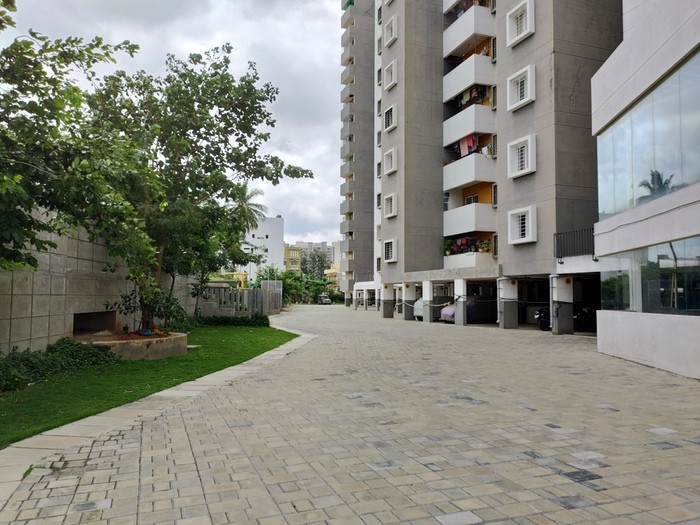 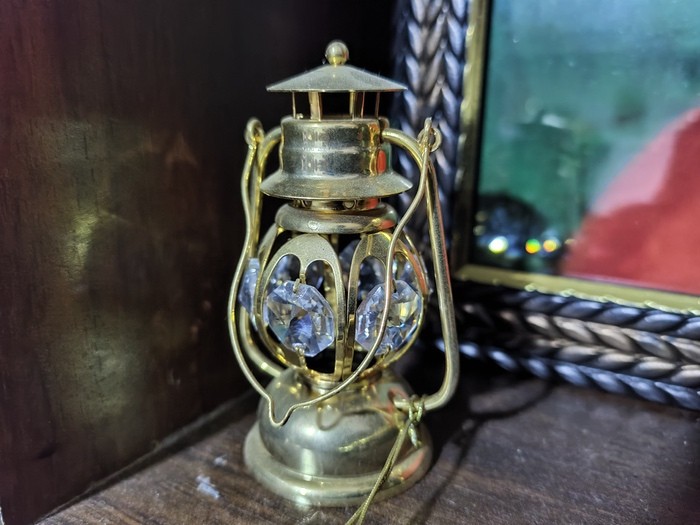 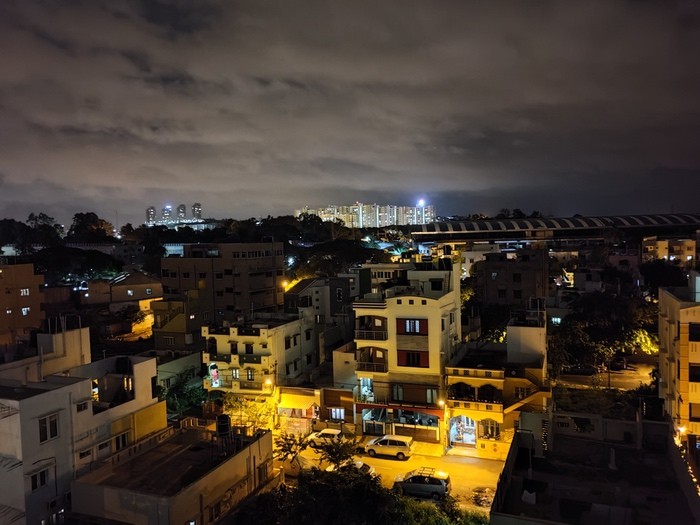 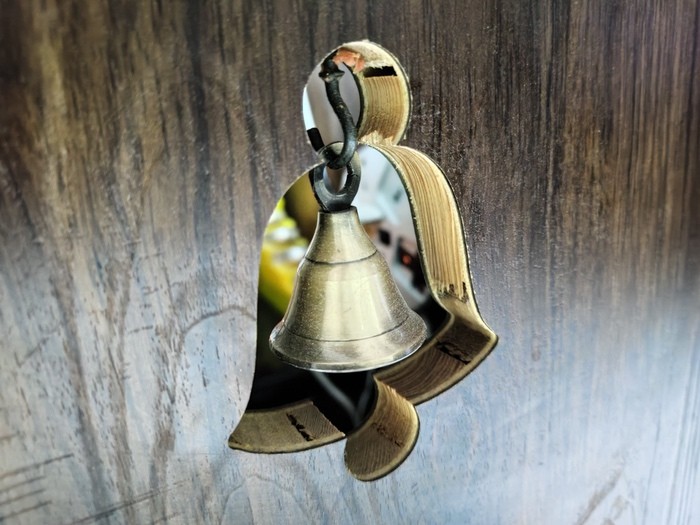 Speaking of low-light conditions, the ROG Phone 3 captures sufficient light but at times does not get the colors right which gives the images a washed-out look. These are issues that Asus should be able to fix via an update. The 13MP ultra-wide sensor is the same from the ROG Phone 2 and just as one would expect, does an alright job in good lighting, and when post-sunset, the images tend to get soft. The 24MP selfie shooter is good at managing dynamic range but it smoothens out the skin more often than not. There’s a 5MP macro sensor too which works as advertised but not sure how often one would be using it.

Given that the IMX 686 is a capable sensor, a Google Camera port should be able to produce better images. We’re on the lookout for a suitable build and will do a dedicated post if there is a drastic difference in the quality of output. A few things that we found interesting in the camera UI though is that the ROG Phone 3 can shoot slow-motion videos in 4K which is a rarity. It can also shoot HDR videos.

6000mAh. We could probably just end the battery section with that but we will go on to elaborate further since there are some interesting features here too. First up, the battery life on the ROG Phone 3 is insane. While the phone, for the most part, does everything very well, we haven’t used this adjective for any other section including performance because there are other phones offering an experience that is similar or at least close to what the ROG 3 offers. The battery life, though, is truly remarkable. 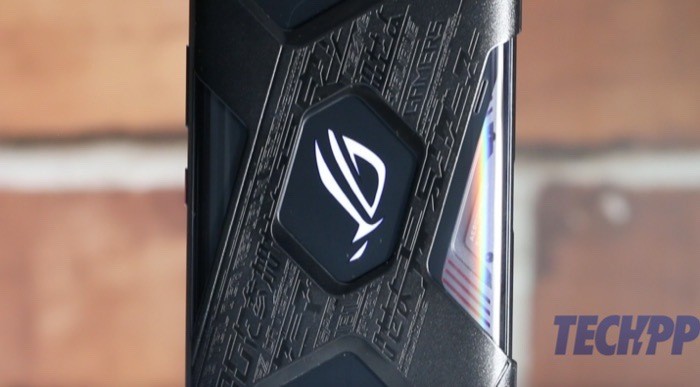 You can achieve up to 8-10 hours of screen-on time on the ROG Phone 3 if you want to kill it in a single day but if used moderately, one can easily get through two days of usage. That’s not it, there’s support for 30W fast charging that charges the phone completely in under 1.5 hours which given the huge capacity is commendable. Additionally, if you choose to charge your phone overnight, Asus has a smart feature that lets you sync the charging speed with your alarm. If you’re going to sleep for 8 hours, you can choose to let the phone charge completely over a span of 8 hours which helps preserve the capacity of the battery in the long run.

There’s no wireless charging and IP rating on the ROG Phone 3. The inclusion of these two features would’ve made it a complete flagship in all senses even for the non-gamers out there. It is Widevine L1 certified, Vo-WiFi, and carrier aggregation is supported. You also get always-on display and an in-display fingerprint scanner that’s not as fast as the rest of the phone. 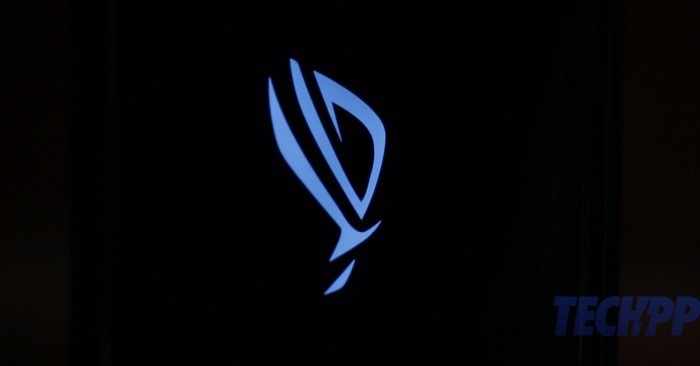 It all comes down to this, doesn’t it? Let’s try to simplify it for you. Below Rs. 50,000, the two options you have are the ROG Phone 3 and the Mi 10. The Mi 10 undoubtedly has better cameras, a curved display with a bezel-less look, a more usable form factor, and wireless charging. The ROG Phone 3 has better performance, a faster and smoother display, better battery life, and a cleaner UI. We have done our job, now it’s time to do yours. Get a piece of paper and make a list of your priorities. Now, go through this paragraph again and make a note of which device your priorities line-up with the most. That is the device to pick.

Alternatively, if you can extend your budget by Rs. 5,000, the OnePlus 8 Pro also enters the picture and now you have to factor in the clean UI, IP rating, and equally good performance that are additions to everything that the Mi 10 offers. Unless you particularly want flagship cameras, wireless charging, and water resistance, the ROG Phone 3 offers good value for your money and should be your pick, even if you are not a gamer per se. Reiterating the fact though, that of all the big numbers that the ROG Phone 3 boasts of, the most important one to keep in mind is 240. 240 grams.