In December last year, Flipkart entered a brand licensing partnership with Nokia to launch a Nokia smart TV powered by Android. A few months back, earlier this year, we started hearing rumors about the launch of a smart streaming box emerging from the same partnership. And today, Flipkart officially announced the same. Called Nokia Media Streamer, the media streaming device allows users to transform a traditional TV into a smart TV. Here’s a closer look at the streaming device. 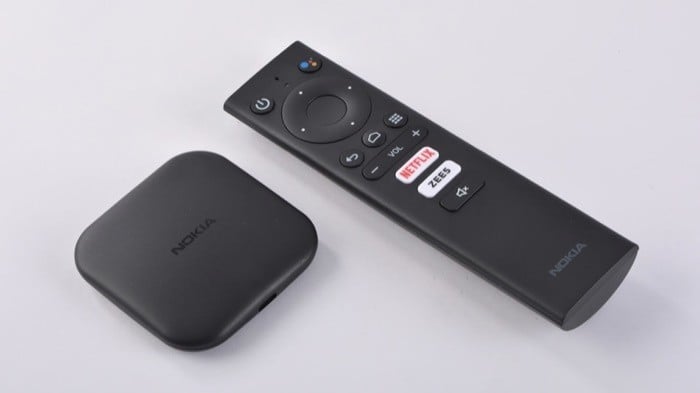 For those unaware, this is not the first time a company has come out with a streaming device that claims to make a traditional TV smart by offering the ability to stream content from different OTT platforms. In the past, we had the likes of Fire TV Stick from Amazon, which has been the best streaming option for quite some time, until a few months back, when Xiaomi brought the Mi Box 4K and Mi TV Stick to India that promise to offer similar functionality. And the latest offering in this space comes from Flipkart and Nokia and competes right up against these other devices.

The Nokia Media Streamer likely runs on Android TV 9, Google’s offering for smart televisions and media streaming devices. It offers a Full HD resolution (1920 x 1080) along with support for Dolby Vision. The device provides built-in Chromecast support to allow users to cast their device’s screen on the television. At its core, there is an unnamed quad-core SoC powering the box, with likely a Mali 450 GPU. Assisting the processor is 1GB of RAM and 8GB of internal storage. The device comes with Wi-Fi (2.4GHz/5GHz) to allow for content streaming and an HDMI port to connect the device to the television.

Furthermore, the Nokia Media Streamer includes a remote that features hotkeys for Netflix and Zee5. In addition, it also has a shortcut key for Google Assistant, which can be used to summon the assistant quickly. Besides, the streamer comes pre-installed with some of the essential Google apps.

The Nokia Media Streamer comes in at Rs 3,499, and it competes with the likes of other popular streaming devices like the Fire TV Stick, Mi TV Stick, and Mi Box 4K, which are also available in the similar price range. As for availability, the device is slated to go on sale on Flipkart starting August 28.

Was this article helpful?
YesNo
TechPP is supported by our audience. We may earn affiliate commissions from buying links on this site.
Read Next
Nokia Power Earbuds Lite Review: Connecting through Clear Audio against Tough...
#Flipkart #nokia #nokia media streamer