The Indian smartphone market has staged a remarkable recovery in the third quarter of the current year. In the period from July 1 to September 30, the market which had witnessed a slump in the first two quarters of the year because of the pandemic and the subsequent lockdown, bounced back in spectacular fashion, hitting record levels, as per a report from Canalys. 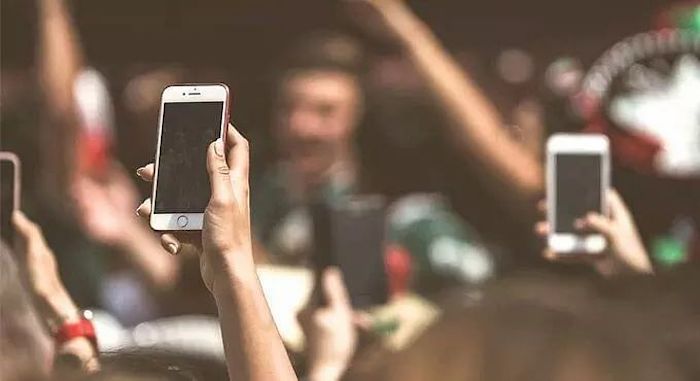 Here are the highlights of the report:

Surprise, surprise: Q3 2020 shipped the most smartphones ever!

Whether it was the pent-up demand that built during the early part of the lockdown or the festive mood, we do not know. What we DO know is that a total of 50 million phones were shipped in Q3 2020, which was not only 8 percent more than the 46.2 million during the same period last year, but actually the highest number of smartphones shipped in a single quarter in India. Now, THAT’s something.

There had been some talk of Samsung outdoing Xiaomi in recent times, but the Chinese brand retains its number one spot in the Indian market, shipping 13.1 million units for a market share of 26.1 percent. This number is well above the 12 million units shipped in the same period last year as well as the 25.9 percent share it earned the brand in Q3 2019. Indeed, the brand recorded a 9 percent year on year growth, continuing its reign as India’s number one smartphone brand.

Samsung’s aggressive pricing in the lower price segments seemed to yield dividends for the Korean brand as it shipped 10.2 million units in Q3 2020, up from 9.5 million in Q3 2019. Ironically, however, its market share went down in spite of this – the brand had a 20.6 percent share in Q3 2019, which came down to 20.4 percent in Q3 2020, in spite of the 7 percent increase in shipments.

In terms of percentage growth, both Realme and Vivo recorded very impressive numbers. In fact, they were neck and neck in the Indian market in Q3 2020, with Vivo being only marginally ahead with a 17.6 percent share as compared to 17.4 percent of Realme. Realme was the fastest-growing brand of the top five in Q3 2020, recording a 23 percent growth as it shipped 8.7 million units as compared to 7.1 million in the same period last year. Vivo on the other hand recorded a 19 percent shipment growth, going to 8.8 million units as compared to 7.4 million in Q3 2019.

Oppo too does well

Rounding off the top five was Oppo, which also registered an increase in shipments in this period, although, like Samsung, its market share slipped marginally. The Chinese brand shipped 6.1 million units as compared to 5.7 million at this time last year, to record 6 percent growth. Its market share slipped a little from 12.3 percent to 12.1 percent over this period, but we do not think this is likely to cause too much concern. 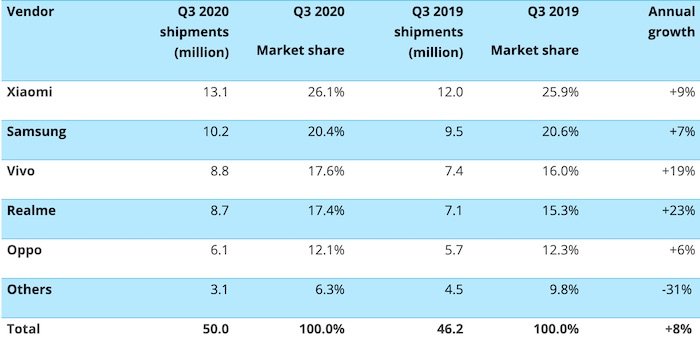 The report says that Apple “regained momentum” in India in this quarter, shipping nearly 8,00,000 units and recording double-digit growth. This is about 1.6 percent of the market, which is up from 1.3 percent last year. Interestingly, as per sources (but not in the excerpt of the report accessible to us), Apple overtook OnePlus in terms of market share in this quarter – OnePlus is reported to have a 1.1 percent market share, which adds up to about 5,50,000 units. Given the price differential across the two brands and the fact that OnePlus released the affordable Nord in this period, this is a bit of a surprise, although we would like to reiterate that OnePlus’ figures are not confirmed by the excerpt of the report we have seen.

Anti-China sentiment? Not in the market

Social networks have been abuzz with talk of the anti-China sentiment following border clashes between Indian and Chinese troops a few months ago. This, however, does not seem to have affected Indian phone consumers. Not only did the shipments of leading Chinese players in the Indian market – Xiaomi, Vivo, Realme, and Oppo – go up in Q3 2020, but Chinese vendors comprised 76 per cent of the smartphone shipments of Q3 2020, up from 74 per cent in 2019.

Although we could access no details in terms of figures, the report states that this period saw online channels like Flipkart and Amazon played a major role in India’s record quarter. “Despite the economic downturn, India’s penchant for a good smartphone, and a good bargain remains intact,” a Canalys analyst says. It would definitely seem so!

Was this article helpful?
YesNo
TechPP is supported by our audience. We may earn affiliate commissions from buying links on this site.
Read Next
How to Change Your AirDrop Name on iPhone, iPad and Mac [2023]
#apple #Canalys #oneplus #oppo #Realme #samsung #Stat Stories #Vivo #xiaomi