After having appeared on benchmarking sites quite a few times, Asus has today finally unveiled the much-awaited smartphone for the year, the ROG Phone 5. It goes without saying that the ROG Phone 5 succeeds the ROG Phone 3 (skipping the number 4), and therefore, boasts a series of improvements in performance over the last generation model. What’s different this time around, though, is that Asus is offering three models for the device, namely the ROG Phone 5, the ROG Phone 5 Pro, and the ROG Phone 5 Ultimate. 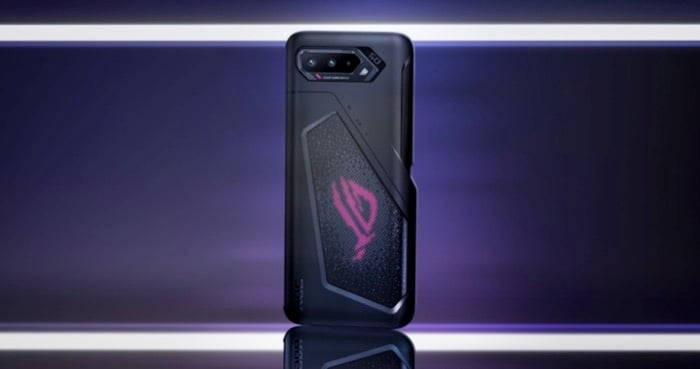 Starting off with the design, as already mentioned, the ROG Phone 5 comes in three different models: ROG Phone 5, ROG Phone 5 Pro, ROG Phone 5 Ultimate, with the difference lying in the back cover used on the three models. The standard ROG Phone 5 has a dot-matrix design with an RGB light back and is available in two colors Storm White and Phantom Black. On the other hand, the Pro variant comes with a PMOLED display called ROG Vision that can be customized to view incoming calls, charging, etc. It will only be available in Phantom Black color. Lastly, there is the ROG Phone 5 Ultimate edition, which features a monochrome PMOLED display and comes in Storm White color. In terms of design, what separates the Ultimate from the Pro is the addition of two additional AirTrigger touch sensors.

Moving to the front, all three models feature a 6.78-inch (Samsung) AMOLED display with Corning Gorilla Glass Victus on top. The display comes in at a 20.4:9 aspect ratio and is HDR10+ certified. It provides a 144Hz refresh rate with a 24.3ms touch latency and a 300Hz touch sampling rate for a smooth gaming experience. The ROG Phone 5 also has a display processor called Pixelworks i6, which uses AI to automatically adapt the picture quality and tune the contrast, brightness, sharpness, and color temperature of the display.

Talking about performance, being a gaming phone, the ROG Phone 5 uses the latest and top-of-the-line chipset offering, the Snapdragon 888. The Qualcomm Snapdragon 888 is a 5G-enabled chipset built on the 5nm manufacturing process. It offers up to 2.84GHz of clock speed and has the Adreno 660 GPU to handle all the graphics processing. Assisting the Snapdragon 888 is up to 18GB of LPDDR5 RAM and up to 512GB of UFS3.1 storage. And to power the internals, all three models have the same 6000mAh battery (x2 3000mAh) with 65W charging support. The battery utilizes what Asus calls an MMT design, which enables lower temperature during charging and discharging.

As for other specifications, the ROG Phone 5 comes with support for 5G, dual 4G VoLTE, Wi-Fi 6, Bluetooth 5.2, and NFC. It runs on ROG UI based on Android 11 out of the box. For audio, there are dual 7-magnet speakers with GameFX and Dirac HD sound on the device, powered by dual Cirrus Logic AMP. Moreover, Asus has also included a 3.5mm audio jack. What’s more, the phone comes with Asus’s own gaming portal, along with a host of other features and functionalities to aid with a better gaming experience, such as GameFX audio, side-mounted port, AirTrigger 5, GameCool 5, and AeroActive Cooler 5.

As for video recording capabilities, the ROG Phone 5 can record up to 8K at 30fps. It has a 3-axis EIS for image stabilization. Moreover, the rear cameras also support 4K time-lapse recording, along with slow-mo video up to 4K at 120fps.

All three ROG Phone 5 are available in different RAM and storage configurations.

As for availability, the ROG Phone 5 will be available in India starting April 15 on Flipkart.

Asus is also offering a host of accessories for the ROG Phone 5, such as the ROG Kunai 3 controller, Kunai 3 bumper, Kunai 3 Grip, and Kunai 3 Charger, which can be bought separately.