Is your home REALLY clean?

Dust is a by-product of everyday life, and it’s not going anywhere soon. As you read this, microscopic specks of dust are settling on the screen of your smartphone, settling in the cracks of your ceiling and your floorboards, and coating the washing machine that churns out clothes for your family. As you go about your day, dust clings to your clothing and skin, and as you sleep at night, dust settles in the seams of your bedsheets. 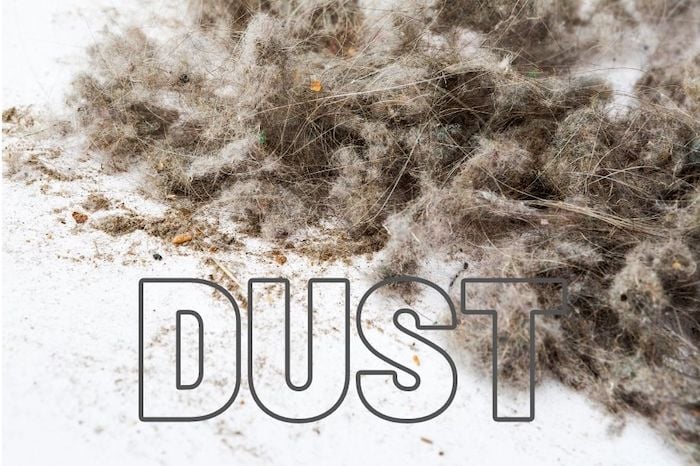 The general consensus is that dust is harmless, but sadly, it’s not. You will realize this once you understand the constituents of the household dust. Dyson India, along with FICCI Research & Analysis Center (FRAC) carried out a study in 45 Indian households comprising of 184 surfaces spread across four major Indian cities – Delhi, Mumbai, Bangalore, and Hyderabad. This was the second such study carried out by Dyson in India with the first one commissioned in 2018 comprising of 100 households.

My house was amongst the 45 households which were part of this study. As someone who has a family member fighting allergic bouts, it was a great opportunity to know and understand the allergy-causing constituents of dust at my house. It’s a high-rise apartment (beyond the 20th floor) next to an urban forest in Bangalore. While we regularly clean the home, using both traditional (sweep, mop) and modern (vacuum) methods, the assumption was there wouldn’t be much dust for the team to collect. We had also deep cleaned the beds, mattresses, and sofa less than two weeks back. 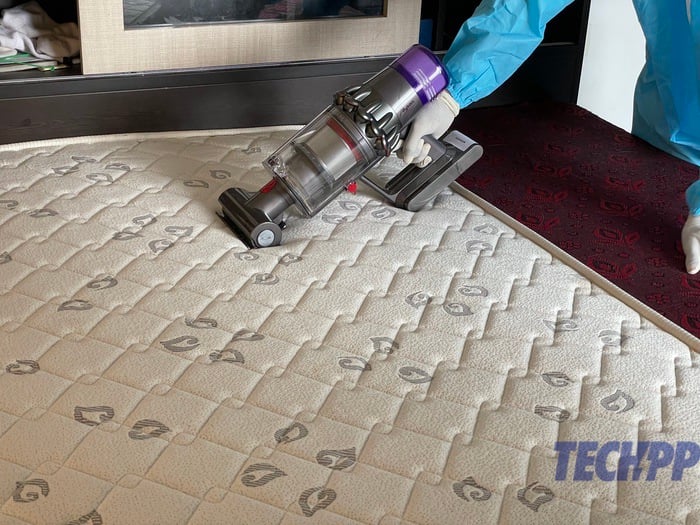 The FRAC personnel collected samples from four sources for the study – the sofa, the mattress, the car, and the carpet. In my case, with an uncarpeted floor, the team collected dust from just the sofa, mattress, and car interiors. The study examined 11 different allergens, mainly normal ones like human, dog, and cat hair, but also less obvious ones like bacterial and fungal counts, dust mite allergens, and even spore counts. Approximately 25 grams of dust were collected from each of the above-mentioned sources. As you’d expect, the team used a Dyson V11 Absolute Pro handheld vacuum with a separate unit for each of the sources to ensure the dust collected isn’t mixed at any point. 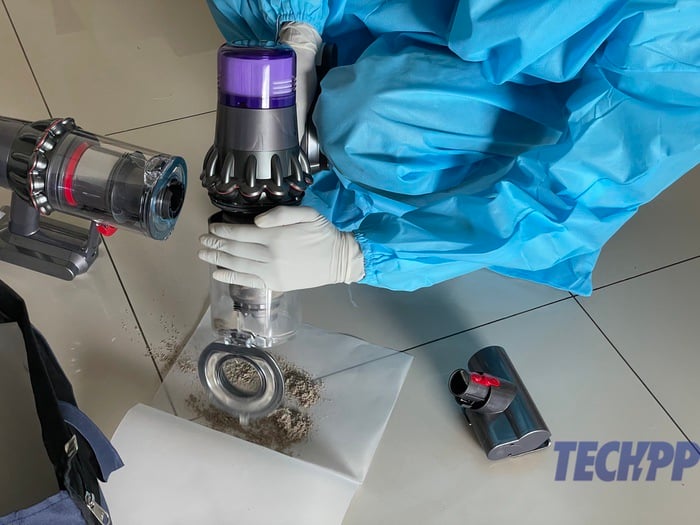 Household dust consists of many components such as dust mites, dust mite droppings, bacteria, mold, small insects, and particulates. Their droppings and dead bodies are what causes allergies. Their presence is almost undetectable on various surfaces in our homes where we eat, sit, play, sleep, such as on floors, mattresses, sofas, beds, and carpets, especially in areas that cannot be cleaned regularly by conventional methods. A simple act such as sitting on a sofa can cause allergens to become airborne and trigger allergic reactions or allergies. Dust mite allergens, mold spores, and other insect allergens are microscopic in size and can easily be transferred to our bodies without us realizing it. Their size is often between 0.5 and 5 microns. (For comparison, the diameter of a human hair is about 50 microns).

Here are some shocking dust facts and figures

What are the sources of house dust?

House dust may be a nuisance and it may trigger allergic reactions, but it’s not simple. House dust comes from a myriad of sources, some of which include our own bodies, as we move in and out of our homes. In fact, about 75% of the materials found in house dust are human skin cells. The rest is composed primarily of clothing fibers (including pet hair), carpet fibers, animal dander, bacteria, mold spores and pieces of insects that have flown into the home or been tracked in on shoes.

Findings of the study 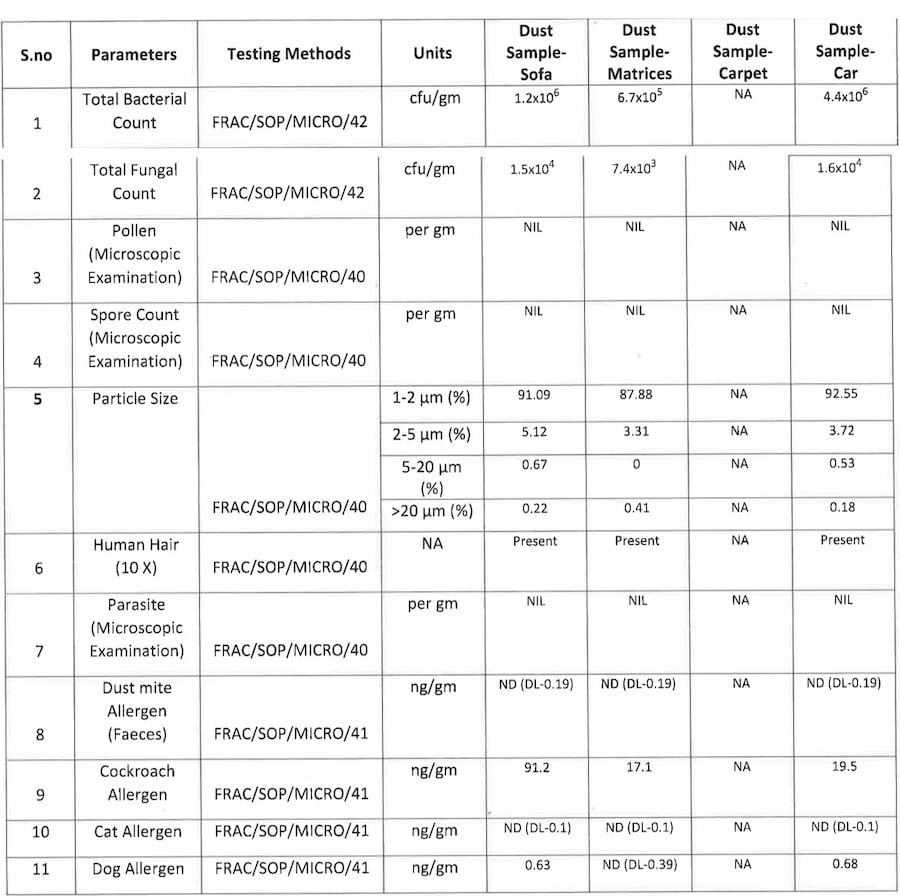 For someone with a pet at home, finding dog allergens wasn’t really a surprise. But the number of Bacteria and fungal counts really shocked us. They were found in significant amounts in all three sources with the highest being in the mattress. However, there were no pollen allergens found in the samples collected. It’s interesting because Bangalore is known to be a hub for pollen and we stay next to a forest so we always assumed the primary cause of allergy being pollen.

While the above was specific to my home, the findings from the other 44 households paint a shocking picture yet again.

The earlier dust study carried out in 2018 revealed that Cockroach Allergens were commonly found inside traditionally cleaned Indian homes. Many were surprised at the amount of dust that was found hidden in their homes and cars after traditional cleaning methods had been used regularly.

As per Dyson, many of the respondents believed that dusting, sweeping, and mopping were effective in keeping their homes dust-free and were surprised at how much hidden dust was in their homes after the traditional cleaning methods were used regularly. It also revealed that Bangalore’s moderately humid and slightly warm weather resulted in a higher dust mite concentration than Mumbai. The findings also showed that in two out of three houses in Bangalore, at least one person was affected by some kind of dust allergy and that the total fungal count in Bangalore was higher than in other metropolitan cities like New Delhi and Mumbai. This sort of matches with my anecdotal observations over the years while living in Bangalore. 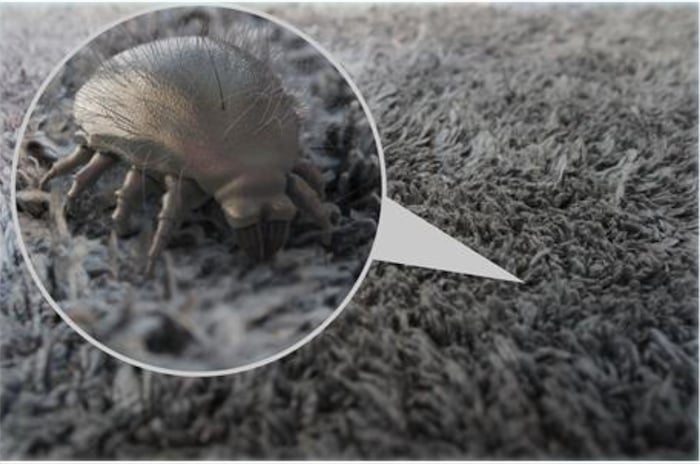 According to Dr. Lancelot Mark Pinto, Consultant Pulmonologist at P.D Hinduja Hospital & MRC, the average number of asthmatic attacks per year is 8.4, with an average duration of four days per attack. In India, asthma is only one manifestation of allergy. Others include allergic rhinitis/sinusitis, ocular manifestations (eyes), and food allergies. Contrary to the general perception of avoiding outside pollution to stay safe from allergens, Dr Pinto says we are not safe from allergens inside the household either. In addition to outdoor pollutants making way indoors, house dust has allergens which are unique to the indoor environment such as house dust mites, cockroach allergens, pet dander, fungal spores, all of which tend to be present in high densities indoors, owing to the limited ventilation that modern-day homes offer.

This was a real eye-opener for me and my folks at home. While we would spend considerable amount of time to clean up and mop the floors, the amount of dust (and all the different constituents) on sofa and mattresses was shocking to say the least. The traditional way of ‘dusting’ doesn’t really help since the dust simply settles down on other surfaces. Air Purifiers can help to a certain extent by trapping bigger particulate matter but for smaller constituents like bacteria, fungi, pet/cockroach allergens etc., there is no real alternative to frequent vacuuming. In addition to that, fumigation and getting rid of mold formations from time to time should help bring down the bad effects of house dust. Mind you, dust isn’t going anywhere soon. We have to cut down the sources.

Skullcandy Jib+ Review: Some plus, some minus
Puravankara Atmosphere: Smart Homes just got Smarter
[First Cut] Vivo Z1x: The Z1 Pro with some X Factor
VPNs aren’t perfect: Here are some of the best VPN…
What is GTD, and what are some of the best GTD apps
First Cut: Xiaomi Redmi 8: The 8A with some glossy style and…