Xiaomi is a brand known for offering smartphones at extremely competitive prices. The brand and its sister brands, Poco and Redmi in particular, broadly follow the affordable price-powerful specs equation approach. This has worked so well for the company that it has got extremely comfortable on the number one spot of the smartphone market leader board in India. But what happens when devices from sister brands following a largely similar strategy get in each other’s way? Well, that is what happened when Xiaomi launched the Redmi Note 10 Pro Max with the same starting price of Rs. 18,999 as the Poco’s X3 Pro. They are easily among the best options at that price point, but which of them is the better one? We put them in the ring to see which of the two lands a knockout punch. 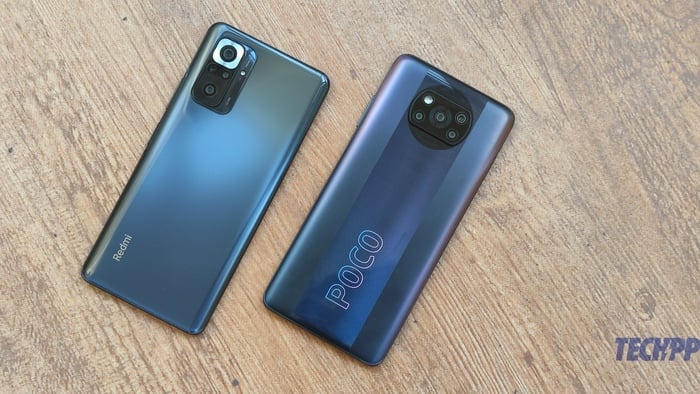 Looks and design: Loud vs classy (and glassy)

We often complain that most smartphones today pretty much follow a broadly similar design outline these days. While this somewhat fits the Redmi Note 10 Pro’s design, the same cannot be said about the Poco X3 Pro. Poco has managed to make a smartphone that would most definitely stand out of your average-looking smartphone crowd. The smartphone comes with a circular camera unit on the back which comes as a breath of fresh air in the era of all-things-rectangular, and also brings in a flashy dual-tone finish back. We call it flashy because the middle strip shines quite vigorously when light falls on it from different angles. Adding to this is the massive Poco logo lined with iridescent colors, placed vertically on it. The smartphone screams for attention like a couple fighting in the middle of a restaurant. You wouldn’t want to be a part of that conversation, but would definitely pay attention.

The Redmi Note 10 Pro Max follows a slightly more conventional design trend but Redmi has managed to make the Note 10 Pro Max look stylish and classy. Unlike the X3 Pro, the phone does not really stand out. It is more like a classy person who sits in the corner of a coffee shop by the window and makes you curious and intrigued when you pass by. The Redmi Note 10 Pro Max also has a glass-y edge over the Poco because the phone is glass front and back and is slim and light, while the Poco X3 Pro comes with a plastic back, and is also a tad thicker and heavier in comparison. Both phones come with splash resistance with an IP53 rating but Poco X3 Pro has a Gorilla Glass 6 protection on the front while the Redmi Note 10 Pro is protected by a Gorilla Glass 5. 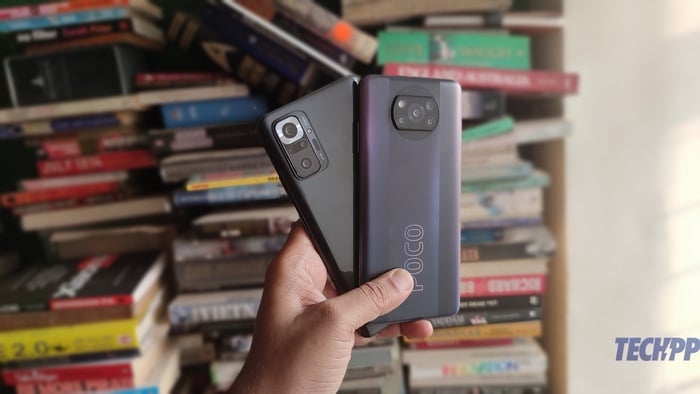 For those who want their phones to be so loud in terms of design that they do not just edge out but push all other smartphones off the table when you put them down on the table, the Poco X3 Pro is the phone made for you. But if you are someone who prefers an ageless, classy, understated design, we think the Redmi Note 10 Pro Max is the one for you.

And while we have been complaining about boring smartphone designs for a while, the Poco X3 Pro is a little too loud even for us, which is why Redmi Note 10 Pro Max is the winner here. 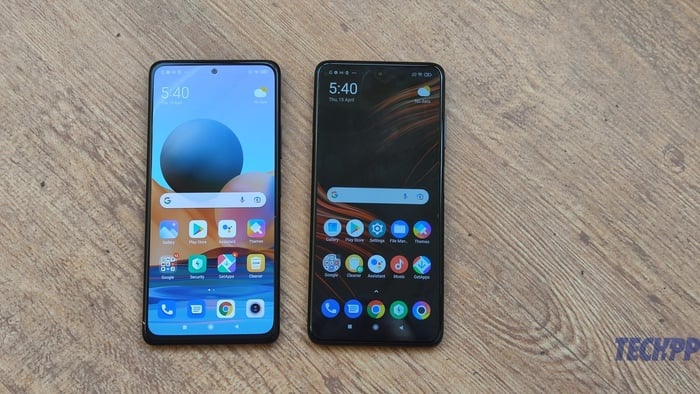 Processor and gaming: Mid-segment Dragon gets sunk by a flagship one! 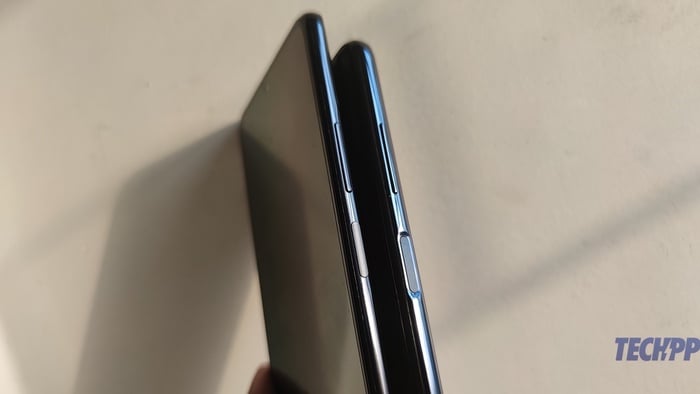 The difference in the names reflects in their prowess and performance. While the Snapdragon 732G is a very efficient processor in its own right, it is going up against a high-end processor, the Snapdragon 860. The Redmi Note 10 Pro Max handles casual gaming very well and will even be able to offer you a reasonably high-end gaming experience. This means in no way lags would dominate the high-end gaming experience on the Note 10 Pro Max but the phone will feel as if it can be pushed too far. And this feeling will get amplified when you will compare it with the Poco X3 Pro. The phone handles high-end games with an ease which is unparalleled to anything on the Redmi Note 10 Pro or indeed anything in the sub-Rs 25,000 segment.

The more powerful processor on the Poco X3 Pro makes it a winner in this category. 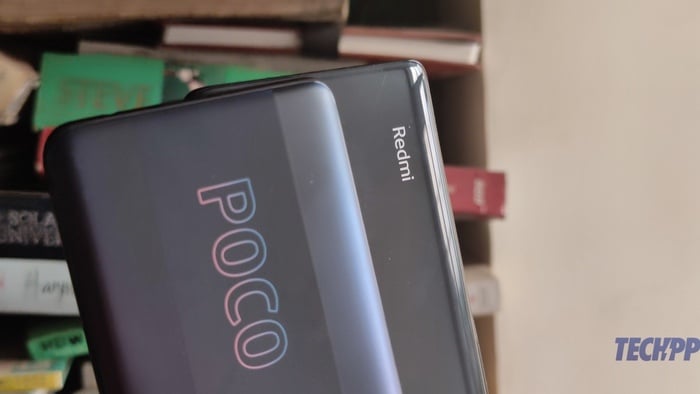 Thanks to a more powerful processor, the Poco X3 Pro feels snappier, prompt, almost as if the phone is always on its feet to get your daily chores underway. Do not get us wrong, the Redmi Note is very quick but the difference in speed comes forth when it is compared with the Poco X3 Pro. That said, the Note 10 Pro Max’s display wins it some brownie points as it would make for a better binge-watching partner as compared to the Poco X3 Pro. Both devices have stereo speakers which have pretty much the same output although the Poco X3 is slightly louder.

Neither gets support for 5G which means there will be no immediate effect on the two phones’ performance but the phones are not “future proof,” for those who are already looking forward to that faster network. Call quality on the Redmi Note 10 Pro Max is a teensy bit better and its lighter, smaller frame make the device generally easier to hold and use. The Poco X3 Pro might be faster but the Note 10 Pro Max is by no means slow and is easier to handle. This is why we are calling this one a tie in general performance terms. 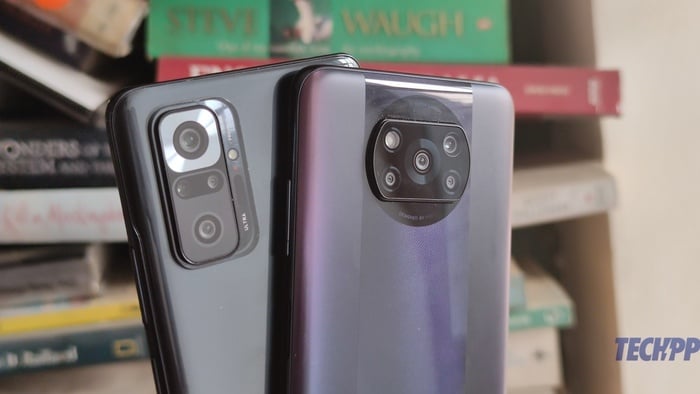 While we do not discriminate on the basis of megapixel numbers, the extra megapixels on the Redmi Note 10 Pro Max seems to be grabbing extra detail and information in pictures. The 48-megapixel shooter on the Poco X3 Pro does well but falls a little behind in the detail department. The two phones walk shoulder to shoulder in the video department and the X3 Pro actually seemed to be processing high-resolution shots faster than the Redmi Note 10 Pro (that processor, perhaps) but the Redmi Note also has a better macro sensor which gives back the Note its edge. That said, the 20-megapixel front-facing camera on the Poco X3 Pro captures more detail and produces more realistic colors as compared to the 16-megapixel shooter on the Redmi Note 10 Pro.

The Note is easily the more notable performer in the camera section, although the Poco leaves a mark in the selfie one.

Battery: The charge of the mAh brigade 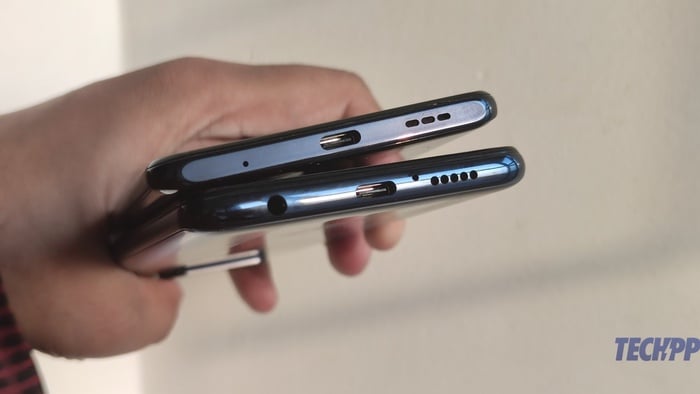 There are many things working in Poco X3 Pro’s favor when it comes to battery performance. The variable refresh rate of the display, a marginally bigger battery, and perhaps a slightly less bright display, all join hands to make the X3 Pro last longer as compared to the Note 10 Pro Max. The Poco X3 Pro’s 5,160 mAh battery managed to see us through a day and a half of normal usage while the 5,020 mAh battery on the Redmi Note 10 Pro Max only saw a little more than a day of our daily usage. The two phones come with support for fast charge and have a 33W charger in the box. Despite the same number, the Poco X3 seemed to charge a tad faster as it went from zero to 100 percent in a little more than an hour as compared to the Redmi Note 10 Pro Max which took about an hour and twenty minutes. All of this makes the Poco X3 Pro the clear winner in the battery round.

The brands may be different but their bloodline is the same. Both the phones are powered by Android 11 topped with MIUI 12. But there is a slight difference. The Poco X3 pro comes with the Poco launcher which it claims is ad-free. At one time, the Redmi Note’s UI was laden with ads but recent times have seen their number come down, so as to be hardly noticeable. The overall interface experience on the two devices is largely the same for most users. It is a tie for us. 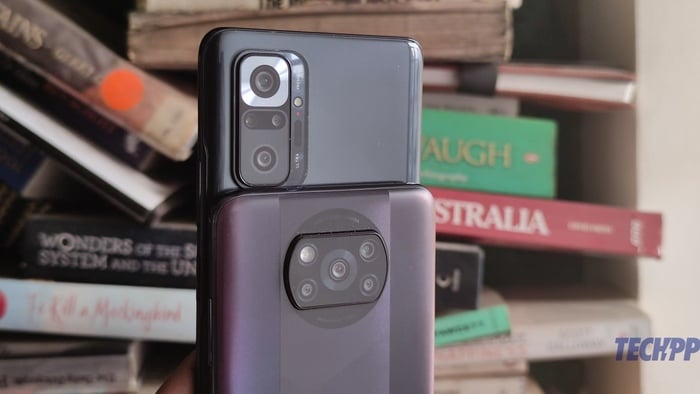 Verdict: Which of the Pros is the One? 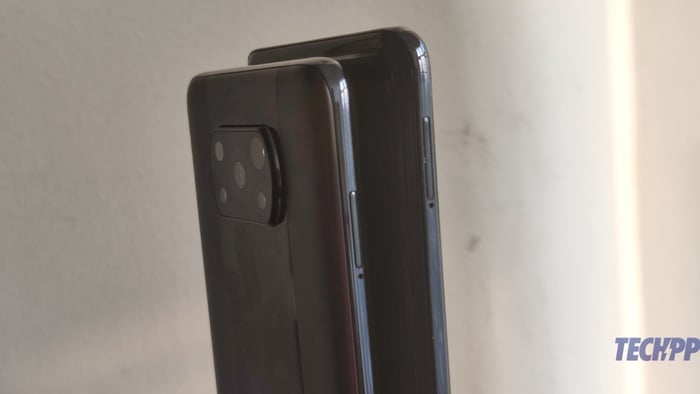 Just how closely these two phones are matches can be seen by the fact that both win three rounds each, and two are tied. And the rounds they win should give you an indication of which of the two is best for you: the Poco X3 Pro wins on Price, Gaming and Processor, and Battery, while the Redmi Note 10 Pro Max wins on Looks and Design, Display and Camera. Both phones are tied in UI and General Performance.

Our verdict is simple: If you are in the market for a phone that looks stylish and classy, has a great display, a substantial rear camera, and a decent performance, then you should opt for the Redmi Note 10 Pro Max. But if high-end gaming and near-flagship performance, a scream for attention design, better battery performance, and as much value for money as possible occupy important places your phone buying criteria then the Poco X3 Pro is the device of your dreams.