For many people, the term “Android tablet” is a contradiction. And that is because for reasons best known to those behind the OS, Android never really got too comfortable in tablet-land. Yes, it did have its notable moments with the Nexus 7 tablet, and some even recall the Motorola Xoom fondly, but by and large, Android has been a very distant second to Apple in the tablet race. Things have come to the stage that the tablet game has become a one-horse (tab?) race very much, with the iPad a few laps ahead of the competition. Android tablets generally come into the picture only on tighter budgets or when those addicted to the S Pen from Samsung want the Note experience on a larger device. 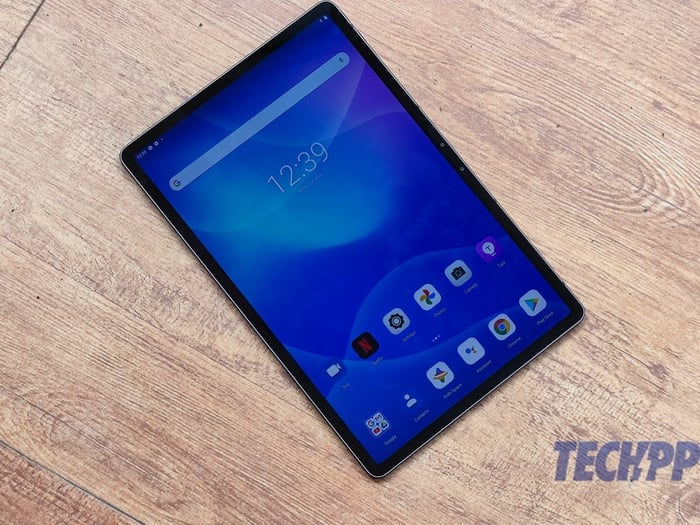 Does the new tablet from Lenovo, the Tab 11 Pro, change that?

Well, in terms of design, the Tab P11 Pro can go toe to toe against just about any tablet out there, and yes, we include the iPad in that list. This is a very smart-looking and well-designed tablet. Its glass front and aluminum unibody frame and back give it a very premium feel. Like the recent iPad Pros and iPad Air, the sides are straight rather than curved. The back has a subtle dual-tone, with a slightly different shaded band running along part of the back. At 6.9 mm thin (and that too because of the slightly protruding camera unit), it is impressively slim, and at 485 grams, it is on the lighter side for a tablet with an 11.5-inch display (the 10.2-inch display sporting iPad weighs 471 grams).

All of which makes the Tab P11 Pro a very classy-looking product – even the speaker grilles look good. Mind you, the placing of the power/display button, which also doubles up as the fingerprint scanner, is a little odd – it is right on top of the tablet if you hold it in portrait mode (assuming the side with the USB type C port is the base). So if you are reading in portrait mode, your finger has to travel a fair distance to unlock the display – perhaps having it on the side (a la the new iPad Air) would have made more sense.

The fact that the power button is flat against the frame (making it a little more difficult to press) while the volume buttons stand out is a little odd too. There is also a pogo pin port for a special keyboard to be connected to the side (in landscape mode, obviously), but there is no keyboard in the box. 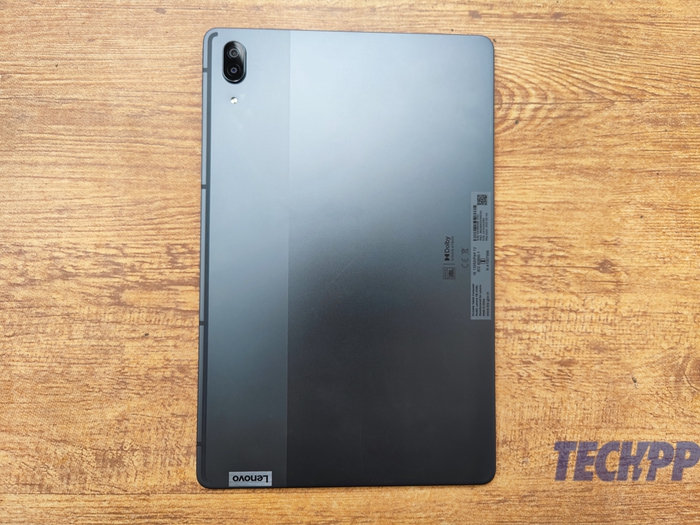 But these are minor issues. The Tab P11 Pro ticks the design and portability boxes comfortably. This is a good-looking tablet you can easily carry around with yourself without ever feeling burdened.

There is no doubt who the star performers of the Tab P11 Pro – that 11.5-inch 2K (2560 x 1600) OLED display (normal 60 Hz refresh rate, though) and the quad JBL speakers with support for Dolby Atmos. The display is bright and sharp and allied with those very good speakers, made the tablet one of the best options for those who want to binge-watch videos or series. Watching films on the tablet is frankly breathtaking. And the speakers are good enough to be used for casual listening. We did miss an audio jack, though. 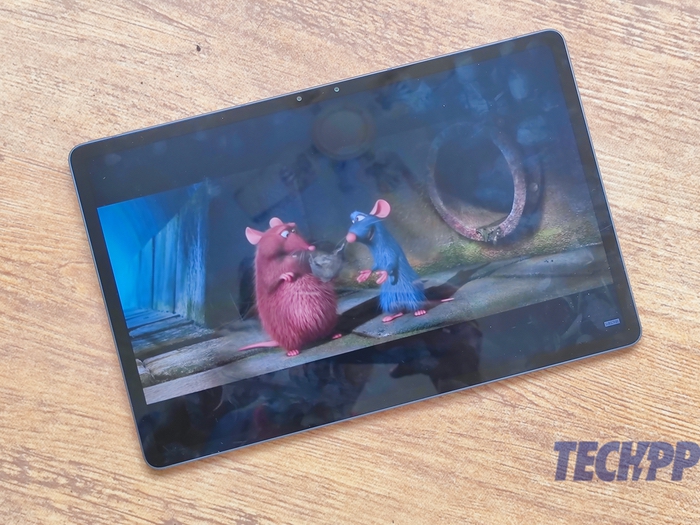 However, step away from the multimedia zone, and the Tab P11 Pro becomes a little more mortal. No, it is not a bad performer. Indeed, it flies through most regular tasks like social networks, web browsing, checking mail, and messing around with messages and even handles casual games easily – that display is an absolute joy to use.

However, get into slightly high-end gaming or even get into very intense multi-tasking (which one is tempted to do with so much display real estate), and the odd lag and stutter creep in. Perhaps the reason for this lies in the choice of processor driving the device – the Snapdragon 730G is a distinctly mid-segment chip, and even when paired with 6 GB of RAM and 128 GB of storage (expandable using a memory card slot), it does start struggling after a while. And that is a pity when you consider the price of this tablet.

A steady performer, but not quite THE Pro 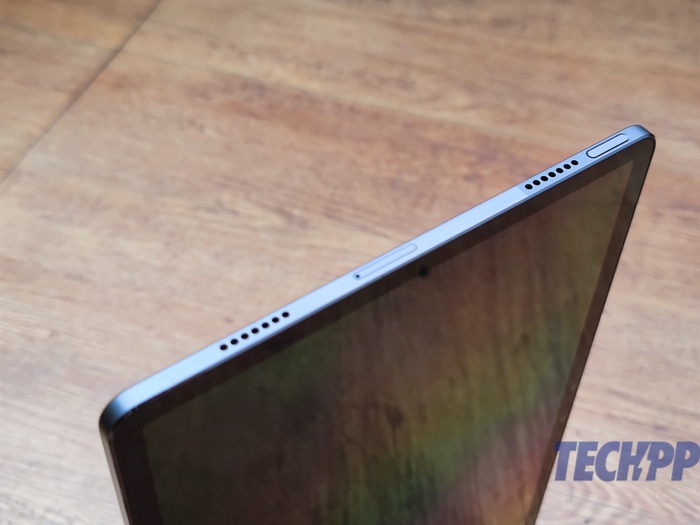 There is also the matter of Android. The OS might be the Lord and Master of smartphones, but many of its apps are not really designed for tablets, and the fact that the P11 Pro runs on an older version of the OS (Android 10) does not help matters. Lenovo has kept the UI clean and uncluttered, but the unusual resolution of the P11 Pro means that a number of apps that we use regularly are not really at their best on it and end up looking “stretched.” And that is such a pity when you consider what a brilliant display the device has.

It also stops the device from living up to the “Pro” tag in its name – Lenovo has added some productivity apps to the tablet (Bamboo Paper, OneNote, MS Office, and others). Still, while they work reasonably well, you can notice the odd stop and start. We do not know the costs involved, but perhaps Lenovo missed a trick by not bundling a stylus (its own Precision Pen is supported) or keyboard with the tablet – without them, the Pro label seems plain odd. While speaking of missing Pro features, it would have been nice to get 4G connectivity at this price (the tablet comes with Wi-Fi, Bluetooth, and GPS). 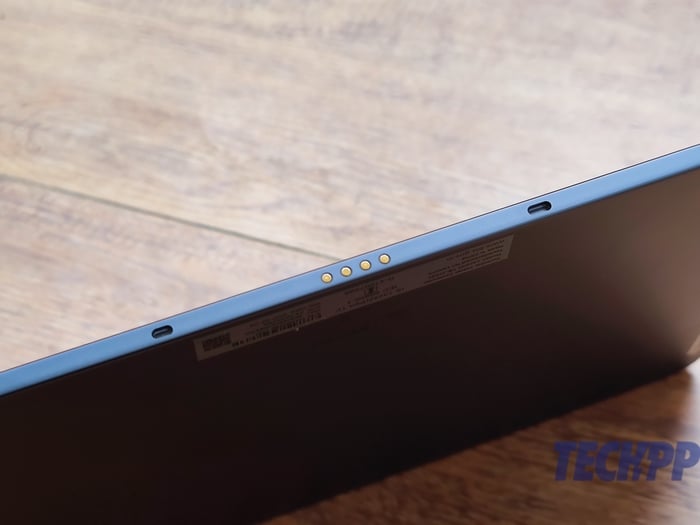 The tablet has dual cameras at the back (13-megapixel main and 5-megapixel ultra-wide) and two 8 megapixel cameras in front (on the right side, rather oddly, rather on top, indicating they would be best used in landscape mode). The main rear camera is a good one, although the size of the tablet makes it slightly odd to take pictures with, and the front-facing cameras are good for Zoom calls – the big display makes this a good device for those group calls.

Battery life is good. We got eight to ten hours of normal to heavy usage, with a lot of video viewing and buzzing mail and social networks. There is a 20W charger in the box that can get the tablet from zilch to a hundred in about two and a half hours. Round that off with a fingerprint scanner that works smoothly, and the Tab P11 Pro comes across as a well-designed, efficient tablet. It is no powerhouse, but it will get most things done and will make you want to watch and watch and watch videos! 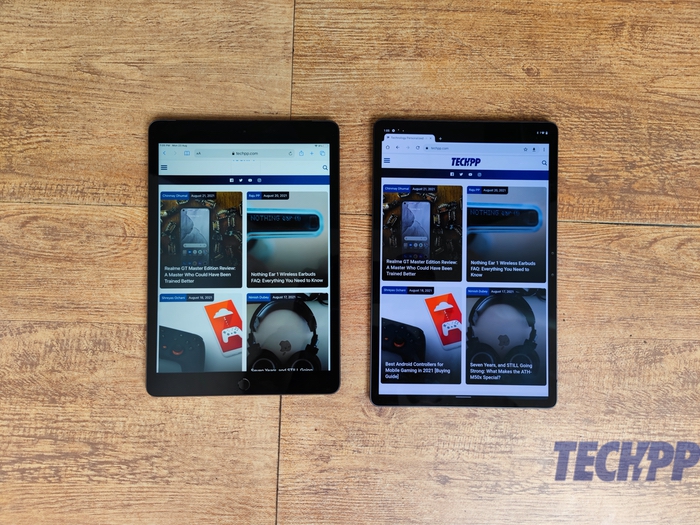 At its starting price of Rs 42,990, the Lenovo P11 Pro has to contend with the Samsung Galaxy S7 FE, which starts at a higher price of Rs 46,999 for a 4 GB/ 64 GB variant. Still, it comes with LTE and the iconic S Pen out of the box, and also runs on the more powerful Snapdragon 750G processor. But perhaps the longest shadow that looms over it is of the iPad (8th generation), which starts at Rs 29,990 for the base 32 GB Wi-Fi edition, but offers a 128 GB LTE version for Rs 41,999 and remains the gold standard for tablets.

Recommending the P11 Pro above any of those is a tough call. The P11 Pro’s brilliant display and terrific sound win it a lot of points, but the processor and the OS hold it back. It is a terrific multimedia device for anyone wanting to watch videos, read books, and browse the Web on the move (perhaps one of the best in its segment in that department), but beyond that, it gets swamped by the competition.

When the iPad was introduced, a lot of folks said the device was great for “content consumption” or for watching content but not the greatest for content creation. The Tab P11 Pro is a lot like that.

Review Overview
Was this article helpful?
YesNo
TechPP is supported by our audience. We may earn affiliate commissions from buying links on this site.
Read Next
Skullcandy Mod Review: Betting on doing the basics well
#android tablet #lenovo #Lenovo Tab P11 Pro #review