A screenshot, also referred to as a screengrab or screen capture, is an image that shows the contents on a device’s display. It’s a nifty system functionality that lets you record a process to assist someone with troubleshooting, capture error messages on apps/software, or save a snippet of what’s displayed when there is no option to download. 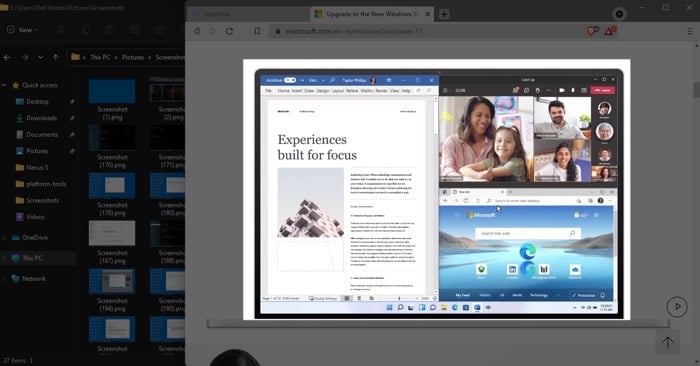 One of the easiest (and time-tested) ways to take a quick screenshot in Windows is to use the Print Screen key. Often labeled as Print Screen, PrtScn, or PrtSc on the keyboard, pressing this key captures the entire screen and copies the same onto the clipboard.

After this, you can paste the captured screenshot into Paint (or any similar app) using either the right-click and Paste functionality or hitting the Ctrl+V shortcut.

2. Capture and Save a Screenshot as a File With Windows+Print Screen

With the Print Screen method, your captured image is saved to the clipboard, and you have to paste it into an app, like Paint or something else, to save it.

While this method works well, there’s a better way to do this: it involves using the Windows key in conjunction with the Print Screen key. For this, open the content/app window you want to capture and hit the Windows and Print Screen buttons together.

Windows will save the screenshot to the Screenshots folder as soon as you do that.

3. Take a Screenshot of the Active Window Using Alt+Print Screen

Sometimes, when you’re documenting steps, you may end up in a situation where you just want to capture the contents of the active window—and not what’s present on the entire screen. Fortunately, Windows lets you do so using the Alt and Print Screen combination.

To do this, bring the active window in focus by clicking on it, and then hit the Alt+Print Screen keyboard shortcut to capture it. The captured screenshot image will get copied to your clipboard, which you can paste on any app you want to save it.

4. Selectively Capture a Part of the Screen With Windows+Shift+S

Similar to situations where you need to capture just the active window, you may also sometimes find the need to take a screenshot of a specific part of the screen.

To make this possible, Microsoft offers screen snipping functionality with a bunch of different capture options. For this, hit the Windows+Shift+S keyboard shortcut to bring up the snipping toolbar. Here, you’ll see the icon for the following options:

Now, depending on what part of the screen you want to capture, click on that icon and use your mouse cursor to draw out a pattern around the object/window to capture it. 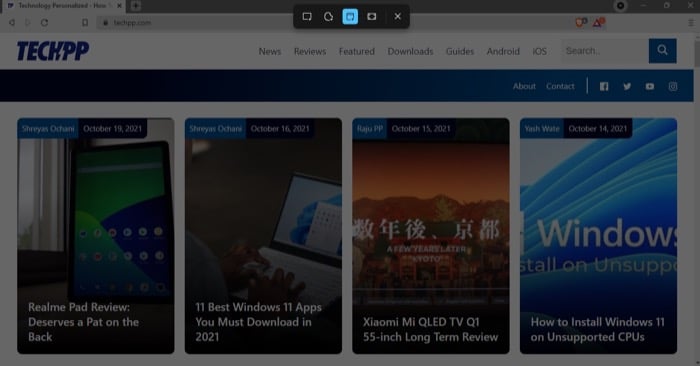 Windows will save this captured image file to your clipboard. You then need to paste it into an app and save it. If you have notifications enabled for screen snipping, you’ll see a popup in the bottom-right corner. Click on it, and you’ll see options to annotate, crop, or save the captured screenshot.

Now, every time you need to access the screen snipping functionality, just hit the Print Screen key on your keyboard.

Much like the screen snipping functionality, Microsoft also offers another built-in screenshot tool. It’s called Snipping Tool, and it comes as a dedicated screenshot app on Windows 11. You can think of it as an advanced version of screen snipping with features like auto-copy, auto-save, the ability to snap multiple windows, and the option to add an outline to each captured snap.

To use the Snipping Tool app, click Start, search for Snipping Tool, and open it. Next, tap the New button in the toolbar. Choose a snip form from the toolbar and select the area you want to capture using the mouse cursor.

Once done, the screenshot will open in the Snipping Tool window where you can perform operations, such as annotating, cropping, etc.

Besides capturing screenshots directly, Snipping Tool also lets you capture screenshots with a delay. This can come in handy when you want to document complex steps through a screenshot wherein you may want to close the Snipping Tool first and open a few apps/perform certain operations on them before taking a screenshot.

To capture delayed screenshots in Windows 11, click on the No delay drop-down menu in Snipping Tool and choose a delay option from the following options: 3 seconds, 5 seconds, and 10 seconds, based on your requirements.

While the above methods of capturing screenshots work well most of the time and offer the basic functionality, they do lack advanced screenshot capabilities available on third-party screenshot utilities.

For instance, certain screenshot tools allow you to take scrolling screenshots, grab text on the screen, take timed screenshots, obfuscate parts of the screenshot, and export them in different formats, among others.

Below is a list of the best third-party screenshot tools you can use in Windows 11:

Choose a Screenshot Method Based on Your Needs

Each of the screenshots methods we’ve listed in this guide allows you to take screenshots on your Windows 11 computer with ease. However, it’s ultimately up to you to choose a method that suits your requirements.

For instance, if you need to take a full-screen screenshot of the entire content on your screen, you can use the Windows+Print Screen method, which captures the screenshot and saves it automatically.

On the other hand, if you want to select an irregular shape on the screen and take a delayed screenshot of the selection, you can use the Snipping Tool method.

Was this article helpful?
YesNo
TechPP is supported by our audience. We may earn affiliate commissions from buying links on this site.
Read Next
How to Install and Use Intel Unison App on Windows, Android and iOS
#how to #how to guide #windows #windows 11