Unlike Windows 10, where you could click through a few settings to change the taskbar location, doing so in Windows 11 isn’t as straightforward.

However, if you’re used to having your taskbar positioned on the top of the display and aren’t feeling at home with a bottom taskbar after upgrading your PC to Windows 11, there’s a handy registry hack that can help you out.

Follow along as we detail the steps involved in using this registry hack to relocate the taskbar from the bottom to the top of the screen in Windows 11.

How to Move Taskbar: Windows 11

A registry hack is an alternative method that involves changing the values of registry keys to customize the appearance and behavior of their associated system components when the operating system doesn’t explicitly provide an option for it.

So, to move your taskbar from the bottom to the top of the screen in Windows 11, you’ll need to modify the associated registry key on your PC using the following steps.

First, head to the Registry Editor. To do this, hit the Windows+R shortcut to launch Run, search regedit, and hit Enter. Alternatively, click on Start and lookup Registry Editor. When prompted in the User Account Control screen, hit Yes.

In the Registry Editor window, click on the search box/address bar right below the toolbar and enter the following key path:
HKEY_CURRENT_USER\Software\Microsoft\Windows\CurrentVersion\Explorer\StuckRects3 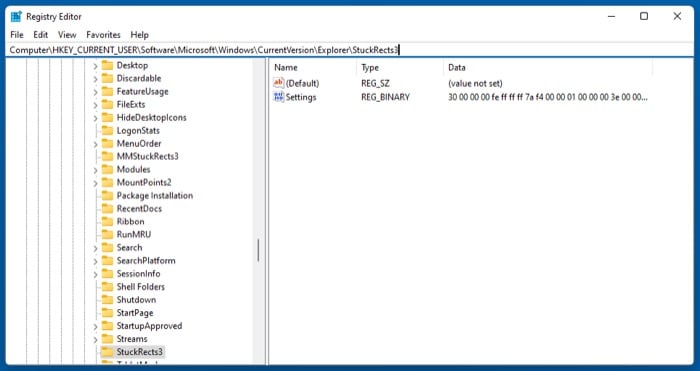 Double-click on the Settings key in the right-hand pane. And, in the Edit Binary Value window, click on the 03 value under the FE column and change it to 01. If you want, you can also choose to change the value to 00 or 02 to change the position of the taskbar to the left or right part of the screen, respectively. However, bear in mind that positioning the taskbar to the left or right is currently known to cause certain problems. 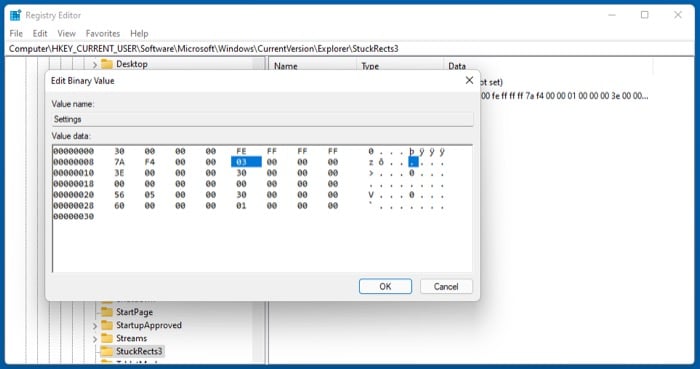 Now, you need to restart the Explorer service for the changes to take effect. For this, you can either restart your PC or restart the process itself.

To do the latter, press Ctrl+Shift+Esc to open Task Manager and click on the Processes tab. Here, right-click on Windows Explorer under Apps and select Restart from the context menu options. 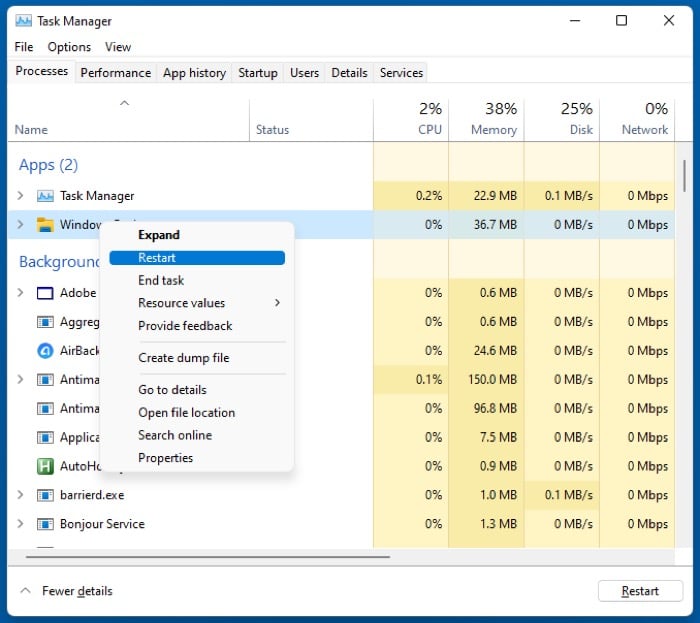 Alternatively, you can also do this via the command line. To do this, launch the Command Prompt in administrative mode by clicking Start, looking up cmd, and pressing the Ctrl+Shift+Enter shortcut.

If you performed the steps correctly and all went well, you should see the taskbar relocated to the top of the screen. And subsequently, you should be able to use it to launch programs, view open apps, access taskbar icons (or other items), and perform other operations seamlessly.

However, when you click the Start button, you’ll notice that even though the Start button is centered in the taskbar, its menu comes from the left-hand side. You can continue using it as is if you aren’t bothered by the layout. But in case you are, you can simply change the Start menu alignment from the taskbar settings.

To do this, open Settings and navigate to Personalization > Taskbar > Taskbar Behaviors. Here, tap on the dropdown menu option next to Taskbar alignment and select Center to align its position with the centered Start button on your taskbar. 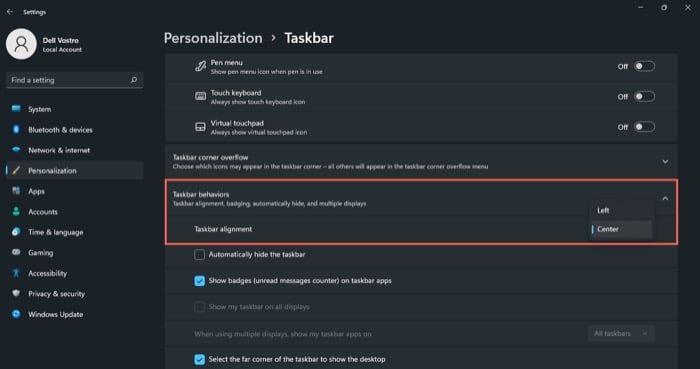 Ideally, you should be able to move the taskbar to the left or right—alongside the top and bottom position—without encountering any errors. However, as it turns out, this currently presents a few issues.

One, sometimes, even after you change the registry value for the taskbar property, the changes don’t reflect on your desktop, and it will continue to show at the bottom. And two, even if you manage to get it to work and align your taskbar to the left or right, the taskbar won’t be very stable and pose random glitches.

Changing the appearance or functionality of some system components is a useful functionality that lets you customize your system to your preference.

If you, too, are wired to work with your desktop setup in a particular way, wherein the taskbar is tiled to the top, right, or left of the screen, you can change the taskbar location in Windows 11 using this guide.

At any point in the future, if you feel like putting the taskbar back to its default location—bottom of the screen—change the value of the registry key (mentioned earlier in the post) back to 03.

Was this article helpful?
YesNo
TechPP is supported by our audience. We may earn affiliate commissions from buying links on this site.
Read Next
11 Best Windows 11 Apps You Must Download in 2023
#how to #how to guide #Taskbar app #windows #windows 11