Off late I am being bombarded with loads of notifications on my Facebook profile and most of them are about me being tagged in a photo and a comment following that. And as you see in the screenshot above, they are about my friends checking ‘Who is glancing through my profile?’ or ‘Who has seen my profile?’

Yes, Facebook provides me an option to Hide and free myself from all such alerts. But the issue is that I see that there are many such apps (with different names) but doing the same thing. The app lures the users by promising to reveal which of their friends are checking out their Facebook profiles recently. 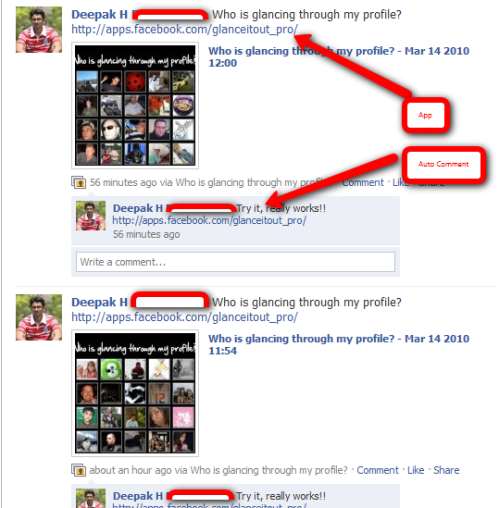 You must know by now that Facebook clearly states that such a thing is very much against their privacy policy. But somehow these apps are making their way into the Facebook app directory and (un)surprisingly find enough innocent people to install them and get fooled. The names of some of these apps have SPAM written all over them. http://apps.facebook.com/azklaukfwucevsz/ is the name of one such app!

It seems, there are some Facebook pages as well which promise to reveal the identities of all those who are checking their Facebook profile, but I am very sure that they are nothing but fake and scam as the users are forced to complete surveys after surveys.

Why I think all these apps are fake? Because most of the notifications I get from Facebook are from those friends whose profile I have never checked. I checked this with a couple of other friends who also shared the same view as mine!

I am not sure what is the process followed by Facebook before approving these apps, but they certainly need to buckle up and evaluate each of them before giving a go-ahead signal.

Update: And now, within minutes of publishing this post, I see one of the apps taken down