Top 5 Free Antivirus for Windows [This Week in Security]

When asked about Anti-virus, I often recommend everyone Kaspersky because of its performance and detection level. But for a less hostile and home environment, going for a free anti-virus alternative is a better choice. Thinking of which, I began my search for the best free antivirus to my already paid license of Kaspersky. I visited most of the AV-companies sites and saw what they had to offer and then compared all those those alternatives to the results of the test conducted by AV-Comparatives in the month of May. According to my observation and my past experience, here are top 5 free anti-viruses. 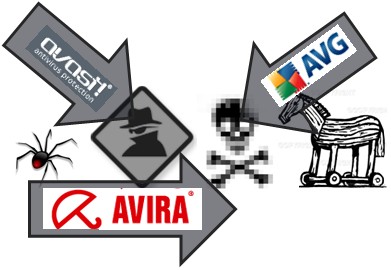 Avira scored the best among all the free available alternatives overall, also beating most of them in Proactive Defence, and other signature based detection. It also has a previous record of performing well in tests conducted by AV-Gmbh.The overall score of the result also points out that apart from Microsoft, Avira is the only alternative that can give the big-guns a challenge, though the disinfection rate history is not in its favour.

In spite of terrible failure of One Care, Microsoft has really bounced back with Microsoft Security Essentials. The anti-virus is extremely light weight and has one of the heighest Proactive Defence levels and least false positives. Avira beats MSSE in only the detection rate. MSSE is gradually being acclaimed for it being a strong competitor to Kaspersky or Norton, but its still not an anti-virus to be used for enterprise of business purposes, but and excellent choice for home.

Only problem is that it requires a 40mb download of virus definitions before it can start functioning fully, also a genuine Windows is a must.

Formerly known as Avast Home Edition, is a perfect blend of all kinds of qualities required in an anti-virus. It neither tops anywhere, nor can be discarded of it being free.It performs better than Panda, McAfee, K7 etc in terms of False Positives, and has a decent detection rates, but lacks in heuristic scanning. AV-Comparitives gave it 2 star and it scored better overall as compared to Trend Micro, PC Tools, McAfee etc.

AVG is a blend of anti-virus and anti-malware. It lack basic firewall but it is sufficient for a home/new users. It also has a link-scanner which keeps a check in any third party exploits to be used onto the system.Its interface is easy to use and virus definitions can easily be updated.

Though not a top-notch, but if you looking for something light, which can do almost all the jobs of protecting your system and which has clean interface with lots of feature, you should go for AVG Free Edition.

It’s an anti-virus with decent heuristics and good detection rate. Overall scores might not be mind-boggling and it scores a fifth spot primarily because of lack of alternatives. It still is new as a brand name in anti-viruses and has a lot of potential. If you are using a personal computer and not hooked up to Internet much, you can certainly go for this one.