I just can’t get enough of Notion Ink Adam! This Android beauty is all set to launch before Christmas and the pre-orders are almost confirmed to begin on December 9th.

Rohan Shravan, Notion Ink’s CEO has been quite open in revealing the details of Adam tablet, so we did have an idea what to expect from it. Now that the specifications, features and design are made official, let us take a deeper look at why this one might just be the best iPad alternative. 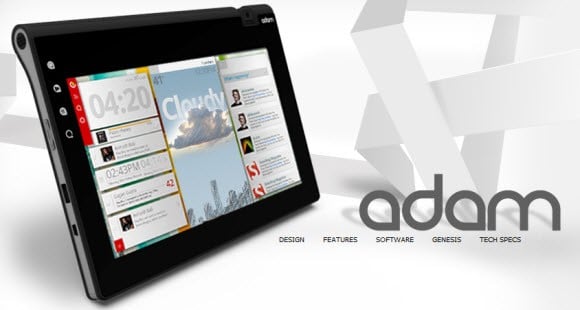 Notion Ink has designed Adam to be around 14 mm thick, while being 191 mm wide and 269 mm long. The tablet PC weighs in at 1.6 pounds, but, given its 10.1-inch touchscreen display (much like the iPad), this should not be too much for sure.

Adam features a free-form design which defines its own bold curve. The curve helps you get a grip that’s evenly weight distributed and ergonomic. No matter which side you look at it, the curve is an advantage over the standard tablet, as its 3-degree elevation lends it a natural viewing angle. What’s more, the cylinder stows away easily-replaceable batteries, provides rotatable housing for the swivel camera, and serves as an excellent location for the stereo speakers.

Even the material being used for Adam is aimed to be light, durable and usable. The screen surfaces are made of pure matte glass that softens reflections under the brightest of lights, and prevents finger-printing. Its insides are crafted from aircraft-worthy magnesium and aluminum alloys, making it light, yet strong.

Adam comes with a camera which you can swivel to take pictures in any direction. A rather basic 3.2 megapixel swivel camera features auto-focus and can be used for video chatting, snapping photos or recording live meetings.

Trust me. Adam carries what many would consider an ideal set of specs for a tablet. It has left many of the geeks like me drooling ever since it was announced early this year.

This bonus feature is rumored to be the ability to multi-boot Android, Windows 7 and Linux! We don’t see the OS details in the tech specs section, isn’t that a clue? We need to wait a while for the official confirmation though! 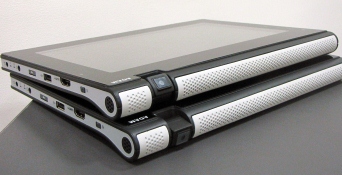 Adam tablet features a first of the kind Nvidia’s Dual core Tegra 250 processor which is much better than what you see in any other tablets in the market right now. Tegra 250 promises incredible number crunching ability for ultra-responsive apps and buttery-smooth animations, coupled with amazing battery life that’ll last you for the long-haul.

The ambient light sensors helps the Adam instinctively switch to the most appropriate display configuration based on your environment. This is a big plus over iPad which suffers when taken out in the sun.

The HDMI port is another major positive which gives you 1080p HD Video output! Not just HDMI, Adam comes with an SD card slot, an USB port and a mini-USB port, all of which can be combined to get upto 120GB of memory storage!

It also features a wide range of networking tools – Wi-Fi, Bluetooth, 3G and GPRS. And did I forget to tell you that Adam supports Flash videos and Adobe Air apps? How cool is that?

Adam will be able to run apps from the Android Market, with a separate platform for software custom-made for the Adam on an app store called Genesis. Their own store will provide apps, music, movies, and “millions of books at aggressive prices”.

Notion Ink has promised that Adam will come with its own office suite that promises to be a lot better than apps available on the Android market.

Though the prices of Adam have not been made official, we do have some expected pricing based on reliable sources. Adam will come in four different models and users can choose the best one depending upon their needs.

If we say it’s competitive pricing, it will be an understatement. Let’s just hope that these expected pricing are indeed true.

So, will you be getting an Adam as and when it’s released? Do let us know.

Was this article helpful?
YesNo
TechPP is supported by our audience. We may earn affiliate commissions from buying links on this site.
#adam tablet #notion ink adam