For every computer to work, an amount of RAM (Random Access Memory) is needed for storing and accessing random instructions at high speed. The RAM is a type of data storage location for temporary information that is erased when the computer is shut down (this is called volatile memory, unlike flash memory which is stored even after the device has been shut down). Each bit of data is stored in capacitors found on the integrated circuit and when the capacitors charge or discharge the data is read/written in bursts. 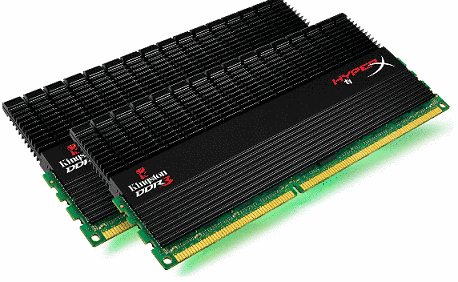 At first glance, RAM is very simple. When you are buying a stick of RAM for your computer, you only look for two specs: interface and frequency. But actually, it is a very complex component that has lots of specs and sometimes can be confusing. We will try to explain as much as we can and give you a solid understanding of what RAM is. We don’t want to scare off the beginner PC builder, but understanding the RAM memory is crucial.

What to consider when choosing RAM

Interface – Be careful to take in consideration what DDR slot you have on your motherboard. When buying a motherboard, you will have to make a choice about what kind of RAM you will use. Nowadays, most motherboards use DDR3 RAM, but there are still old models that work on DDR2 memory. The old DDR1 standard is not in use any more, due to its low speed and low frequency. The main difference between the types of DRAM is the interface, for instance, a DDR2 stick will not fit into a DDR3 slot, so they are not backwards compatible as hard drives are.

How much RAM do I need?

The amount of RAM you install on your PC is also important although there is no standard amount of RAM, many go in the region of 4-8 GB (and this can go up to 32GB) and that pretty much covers just about any usual task, unless you are planning to multitask like there’s no tomorrow. If you do a lot of rendering and you work with multiple programs, than the need for RAM memory is higher. Also, adding some extra RAM to a computer can be a cheap and effective means of increasing its performance. This is also true for slow laptops, but remember that laptop RAM and PC RAM are different.

Also, keep in mind that a 32 bit operating system (x86) can only use a combined maximum of 4GB RAM (this means not only the RAM, but also the memory of the video card). If you plan on installing more than this (some motherboards support up to 32 GB of RAM), you need a 64 bit operating system (this also needs a 64 bit compatible CPU).

Apart from the frequency, RAM also has a Latency setting, which, in common language, is the time that takes from the moment the memory controller sends a request, to the moment when the information stored on the chips is available at the pins of the controller. This should be as small as possible (usually goes between CL 12 and CL 6) but the timing can be modified from the motherboard’s BIOS. The basic idea of this is that the faster the access time, the better the RAM performs. But if you go after the biggest amount of RAM and the lowest latency, you might end up paying quite a lot. For day to day use, better go for quantity at lower speed, you won’t notice the difference.

Overclockers tend to modify the frequencies and timings of RAM sticks to make them much faster, but this should be attempted only by professionals because the process can make the RAM unstable and cause frequent blue screens. Because you need to increase the voltage to the RAM when overclocking it, it heats up quite dramatically, so the cooling of the RAM is essential. Here you can see how the latency has evolved over time. Also, notice that the seek time of a block of information containing eight words has decreased from 90 ns to 10 ns: 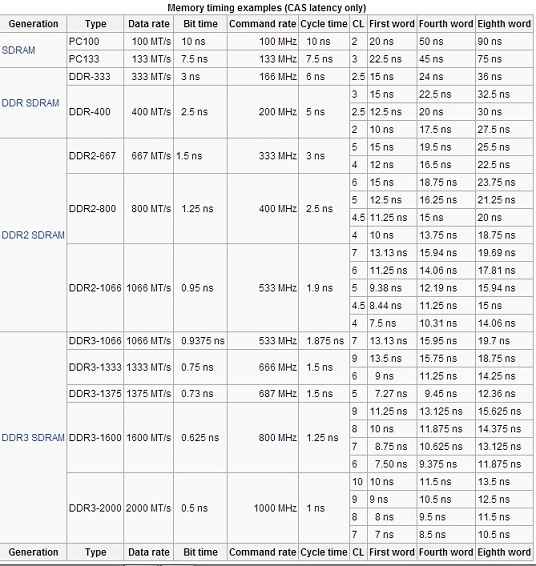 A spec of the motherboard when regarding RAM is the number of channels. Single Channel, Dual Channel or Triple Channel? This refers to the amounts of paths the memory has to communicate to the memory controller. As you might have imagined, the bigger the better. Keep in mind that dual channel kits have two different RAM sticks, triple channel has three and so on. So, you have to pay attention to see which type of architecture your motherboard supports.

As with all other electronic components in this world, different manufacturers make different quality products. So, when going off to buy RAM memory, try to orient yourself for the well known brands that offer more performance and other features, like radiators, which are essential for this component. Like everything in your computer, the RAM heats up pretty bad, and you need to cool it down. Some high end manufacturers offer integrated radiators, so the heat is better dissipated. This a great solution, and it works even better if your cooling system has a RAM cooler installed.

Here are a few well known RAM manufacturers that have made a name for themselves by offering premium quality products:

This about covers the beginners guide in RAM. Although if we had covered all there is to say about RAM, we would be sitting here until tomorrow. They are a very complex and important component of the computer that should be chosen with care. Keep in mind these tips when you are buying your RAM memory, and you should do just fine.

Was this article helpful?
YesNo
TechPP is supported by our audience. We may earn affiliate commissions from buying links on this site.
Read Next
How to Check IMEI Number on iPhone and Android [2023]
#Computer #how to guide